Cleo Rocos - Comedienne Content from the guide to life, the universe and everything 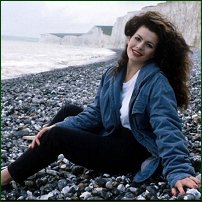 Now there's a name to roll around the tongue, such lovely round vowel sounds, which deliver a picture of some quite substantial curves. The bearer of such a name must surely be an exotic beauty from foreign climes, and if you are thinking along those lines you are not far wrong.

For a generation weaned on the comedy of Kenny Everett, Cleo Rocos is the ultimate fantasy figure and will be forever in their dreams clad in basque and stilettos. She was the girl Kenny referred to as having the huge 'chesticles', and she was one of the reasons Dads across the country joined the children to laugh along with Kenny1. Twenty-something years since she first appeared on our screens it's time to find out just what mischief Cleopatra Anderson Rocos has been up to.

Although born in Rio de Janeiro on 24 July, 1962, Cleo is in fact British and spent her youth travelling with her parents. This resulted in a fractured school life, which she spent at a total of 13 different Catholic schools. Her father was a great disciplinarian and she was reportedly caned more than once in her schooldays for minor offences like throwing her hat out of the window. When she was eventually expelled from school her response was 'Hooray'.

Cleo Rocos first hit our screens, and this will surprise some of you, in the television series of The Hitchhikers Guide to The Galaxy. All right, for those fans of the original television series who may just have missed her, she was in fact one of the aliens in Episode One.

Following her first tentative steps in show business she went on to appear in her most famous role as Miss Whiplash on the Kenny Everett Television Show, much to the dismay of Mrs Mary Whitehouse. She played straight woman to many of Kenny's characters and was often seen climbing ladders in stockings.

Further images of Ms Rocos were indelibly imprinted on the nation's psyche by her appearances in the BBC classic That's Life. In an ambitious attempt to find the most pot-holed street in England, Cleo appeared in a wheelbarrow being pushed by Gavin Campbell. The bumpiness of the streets was established by Cleo holding and indeed spilling jelly from a plate over her ample chest. The science behind this method of gauging uneven footpaths has since been called into question.

Her relationship with Kenny Everett was at one time the subject of much speculation. They met when she was just 15, but they had a certain sense of humour in common and their friendship grew. Despite their undoubted love for each other, and a very short engagement of four or five days, a marriage was out of the question given Kenny's sexuality. So Cleo became the hottest broken-hearted beauty in the land.

Cleo has had other loves in her life, but they all appear to have been overshadowed by her relationship with Kenny. However, her actual life is about more than being Kenny Everett's muse.

Since the heady days of the 1980s Cleo has taken a professional step back from her sex kitten image and become an established comedy actress. To view some of this work you could do worse than check out The Baby Juice Express (2004) where she appears well down the cast list. She has also found work as a travel reporter, a theatre2 and television producer and a comedy writer.

In 2007 Cleo made potentially her biggest career choice since donning a basque and became the 10th housemate to enter the Celebrity Big Brother house. She skilfully balanced on the fence during the now infamous race-row (or just plain row) between Jade Goody and Shilpa Shetty, but fell off the fence when trying to incite trouble with fellow housemate Dirk Benedict3. The show, which brutally highlighted her insecurities, saw her popularity with the bookies drift from joint favourite to also ran.

It should be noted that if Cleo's life has been half as interesting as her publicity, it has surely been quite a ride. She was a professional skateboarder, kidnapped in Buenos Aires and trained to be a bullfighter in Andalusia. Quite interesting really, but if you want the details you'll have to buy the autobiography because Ms Rocos plays her cards very close to her chest. Cleo has written two books to date about her life with Kenny Everett, Bananas Forever: Kenny Everett and Me and Kenny and Me.

Now in her mid-forties, Cleo has aged considerably better than many of a similar age. By all accounts her skin is like porcelain and her glamorous looks haven't faded with the passage of time, which is handy because by her own admission she is currently looking for a husband. She personifies the glamour of a previous age with her false eyelashes, full-face make-up and 'evening' wear, but claims that she still cuts and styles her own hair with a penknife.

Cleo lives by the Thames with her mother and a parrot called Max. She refuses to engage with the internet and doesn't have an official website. Finally, if you shuffle the letters of her name you get - cool score.

1The other reason being the sexy dance troupe Hot Gossip.2The Seven Year Itch, starring Daryl Hannah.3This was more of a storm in a double D cup.