'Office Opera' or 'The Singing Defective' Game Content from the guide to life, the universe and everything 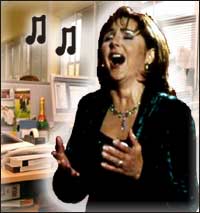 This is a game for people who don't mind making objects of ridicule out of close friends or acquaintances.

The rules - as with all of the best games - are very simple. The idea is to make someone sing. The subtlety is to do it without them knowing.

The most adept players will have several people singing at once or the same person singing over and over again.

Decide on whether you intend to do this just for your own benefit or whether you would like to include someone else in on the game. Anyone in the know may not sing.

Choose the victim(s) and enter into conversation with them. Try and cause them to break into song by using phrases that appear in songs which are, or have been, popular. You mustn't sing yourself or ask them to sing.

So, for instance you may say in the middle of a conversation about travel 'Have you ever been to Tipperary?' or while talking about something you bought in a shoe shop, 'I think these boots were made for walking', when you are trying to do something a little difficult you could say, 'I think I need a little help from my friends.'

Don't force it - if they don't take the bait keep trying. Maybe they don't know the golden oldies. Songs from adverts are often universal.

Of course this game is generally played for fun but you can have bets on the malleability of new contestants. 'I bet you I can make Derek sing before coffee break. The loser has to make the winner a coffee' is often a challenge worth taking up. Especially if Derek is normally quiet and reserved.

Of course telling Derek afterwards is entirely up to you.

In the meantime you may want to look up the recipe for making woodland animals from bread mix. There's one called 'Dough-a-Deer.'