The Works of Troy Kennedy Martin - Screenwriter Content from the guide to life, the universe and everything 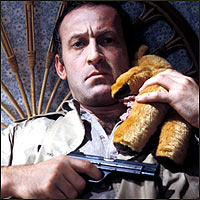 Born in 1932, Troy Kennedy Martin1 was a British scriptwriter who worked in film and television. He was a pioneer in portraying the police as less than perfect in British TV drama, but has been responsible for a surprising range of works. This entry covers just a few of his most significant.

During his National Service in Cyprus during the 1950s, Kennedy Martin foresaw the troubles between the Turks and Greeks there, who at the time were united in their opposition to British rule. On his return to the United Kingdom, he wrote an article for New Statesman on the subject, but it was rejected. He then wrote a play, Incident at Echo Six, based on his experiences in Cyprus, which he sent to the BBC. Much to his surprise, it was accepted and transmitted live on 9 December, 1958. He had found his vocation.

In the early 1960s, the image of the police on British TV was the avuncular Dixon of Dock Green. He was always cheerful and totally unaffected by the stresses of everyday life. Then, in 1962, came Kennedy Martin's Z Cars. Suddenly, police officers were real humans, with real emotions. The production quality is inevitably poor by 21st Century standards, not least because the programme was broadcast live and so lacked some of the car chases and stunts that would later become essential elements for any cop drama. Nevertheless, the gritty realism of Z Cars was a landmark in British TV, with regional voices and working-class issues centre-stage.

In these early days, Kennedy Martin was frustrated by the limitations of live TV, not only because of the sheer practical difficulty of shooting scenes in a single take, but because it constrained the artistic use of the medium. He sought the freedom to use cuts and dissolves, manipulating viewpoint, light and time in TV as was already commonplace in films. In a 1964 issue of Encore, he published Nats Go Home: First Statement of a New Drama For Television, his manifesto for TV as a medium more of the moving image than of dialogue.

As technology improved, so Z Cars moved towards pre-recorded episodes and its stories, though still largely studio-based, were able to explore more dramatic plots. Perversely, though the pre-recorded productions gave the actors some opportunity for retakes, most of the principal cast later claimed they'd preferred the live aspect of those early episodes as it had felt like a 'first night' in the theatre every week.

Incidentally, Z Cars became something of a brand for the BBC. In 1966, two of its characters, Watt (Frank Windsor) and Barlow (Stratford Johns), were given their own show - Softly Softly (and later, Softly Softly: Taskforce). It ran until 1976, while Z Cars continued until 1978. Strangely, Windsor and Johns also starred in Jack the Ripper, a six-part drama reconstruction where the characters Watt and Barlow sifted through the evidence of London's most famous murders to see if they could identify which of the probable suspects was the real killer.

1969 saw Kennedy Martin break into film. And what a debut! His first film was the classic The Italian Job. The reputation he had established in television was enough to attract a cast ranging from the sublime (Noël Coward) to the ridiculous (Benny Hill), not to mention Michael Caine.

Kennedy Martin had by now caught the attention of some big names across the Atlantic. His next film, Kelly's Heroes featured Clint Eastwood, Telly Savalas and Donald Sutherland. It took the bank robbery theme of The Italian Job and set it in Germany during World War Two. Critics may have rated it Donald Sutherland's second-best wartime black comedy of 1970 (after M*A*S*H), but it's a fun film, nevertheless.

Sweeney 2 (1978) was, as the name implies, the second big-screen adaptation of the successful TV series The Sweeney, which had been created by Kennedy Martin's brother, Ian, largely as a reaction to Z Cars. It continued the portrayal of police officers as hard-nosed, sometimes quite unpleasant people.

In an interview he gave to the journal Television & New Media in 2001, Kennedy Martin expressed his preference for TV over film:

A television series really fits my form better because it's long form, it's like writing a novel, and movies are really just a short story.

Returning to television, Kennedy Martin wrote a number of works, including the critically acclaimed Reilly: Ace of Spies (1983). But his masterpiece was surely Edge of Darkness (1985). The casting was perfect, with Bob Peck playing the archetypal Kennedy Martin hard copper, who turns out to have a soft centre, contrasted with Joanne Whalley as his innocent daughter who, it emerges, is not so innocent after all. Joe Don Baker also turns in a marvellous performance as the larger-than-life CIA agent whose idea of going undercover is wearing a stetson while driving a white Rolls-Royce. Add music by Eric Clapton and Willie Nelson, a convoluted plot involving government, big business, environmental activists and weapons-grade plutonium, and Edge of Darkness is rated by many as a triumph.

Kennedy Martin did little television work after Edge of Darkness. According to the preamble to the TVNM interview, this is partly because John Birt, Director General of the BBC from 1992 to 2000 saw his work as being too high-risk. When Birt convened a think-tank of writers and asked them what they felt was wrong with BBC drama, Kennedy Martin's opening statement did little to win him over:

He continued to write occasional screenplays. Following his failure to be selected as scriptwriter on The Hunt for Red October, he wrote the TV movie Hostile Waters (1997), determined that it would be better than The Hunt for Red October. His last film was Red Dust (2004), but he still saw long-form TV drama as his métier. His last television project, described in the 2001 TVNM interview, was The Other Side, a satire on American corporate bureaucracy seen from the perspective of a parallel universe. It is sad that broadcasters now see drama as a gamble; but with his record, Troy Kennedy Martin was always a safe bet.