Advent Calendars Content from the guide to life, the universe and everything 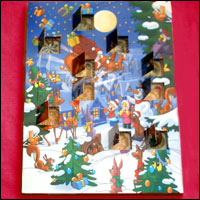 To some, advent calendars may seem like either an excuse to eat chocolate or just another thing that companies can sell to us in the run-up to Christmas. However, the humble advent calendar has a long history and was in fact invented by the same people who brought us Christmas cookies and the practice of decorating our Christmas trees1.

The first advent calendars appeared in 19th-Century Germany, when various methods of counting the days between the start of Advent and Christmas Day were used. Starting on the fourth Sunday before Christmas, or simply on 1 December, the Protestant Christians would keep track of the days by making marks on their doors with a piece of chalk, which would then be rubbed off one by one as Christmas approached. Other practices then developed, including burning a candle or putting up a small religious picture to mark each day.

There is some disagreement as to when the first printed advent calendars appeared, although it is clear that they were first produced at some time in the 1900s. There are claims that a Christian bookshop in Hamburg produced a 'Christmas Clock' in 1902, and a newspaper in Stuttgart is known to have included an advent calendar in its pages in 1904. However, the first mass producer of advent calendars is thought to have been Gerhard Lang, who worked at the Reichhold & Lang printing office in Munich. He released his first advent calendar in 1908 and had a steady business going which produced over thirty patterns of calendar until some time in the 1930s. The calendars would usually have 24 doors, but tended to be better-decorated than modern versions.

Soon enough, calendars were being designed with little doors or pouches which contained small religious pictures or bible extracts. Better still, some of the calendars also contained sweeties in order to keep the attention of young children. The practice escalated up until the Second World War, when paper and cardboard were rationed and advent-calendar production ground to a halt. Once the war ended, though, the production began again, pioneered by Richard Sellmer in 1946.

The introduction of the advent calendar to the USA was aided by 'Ike' Eisenhower, whose grandchildren took a shine to the idea. The calendar was soon adopted in other countries too, and in the UK chocolates began to appear behind the little doors as soon as rationing would allow. By the end of the 1950s, chocolate advent calendars had appeared, and by the following decade they had become widespread. They still exist today, with hundreds of different varieties appearing across the globe.

The modern advent calendar consists of a cardboard surround, usually decorated in some popular culture or chocolate-related theme which has been adjusted to look Christmassy, bearing at least 24 little doors. Behind each door will be a moulded Christmas-related shape, and there may also be small picture on the inside of the door or on the cardboard behind the chocolate. The chocolate will probably sit in a plastic tray, and may be protected by a layer of foil which is best slit open using a fingernail. Advent calendar traditions include the 24th chocolate or door bearing the words 'Santa's Coming' or a depiction of a Nativity scene, and the person opening the calendar guessing which Christmas-related item will be depicted behind each door.

Other types of calendar include the non-chocolate ones, which may contain only pictures, or may provide religious contents instead of those found in the more common secular calendars. Others may contain a small toy or an instant scratch card each day, depending on the calendar's target audience. Permanent calendars are also available, some consisting of decorative wooden structures which contain little drawers, one for each day. Others come in the shape of trees or are made to surround a Christmas tree, allowing for the star to be placed on top after the 24th door is opened. German calendars still have 24 doors, although some which appear in English-speaking countries have a special 25th door or pocket for Christmas Day. Some modern calendars have up to 31 doors and also include the Jewish festival of Hanukkah and/or New Year's Eve, with the latter sort sometimes not containing a chocolate for New Year's Day due to the fact that everyone will be on a diet.

Some advent calendars come in the form of books with 24 individual stories or chapters. In Scandinavia, it is also common to have a series of 'Julekalender' programmes on the television, one for each day up until Christmas. With the advent of the internet came the online advent calendar, with many different versions appearing with various web pages or cartoons hidden behind the 'doors'. Examples include the BBC Radio 3 Bach Advent Calendar and the BBC Religion and Ethics Calendar.

There are several different ways to make your own advent calendar from scratch. For instance, a calendar could consist of 24 little boxes hanging from a Christmas tree as decorations, or 24 little paper bags pegged to a small 'washing line', each with a small decoration on it. Alternatively, you could make a small tree out of green cardboard and pin 24 little socks to it, with each 'stocking' containing a small gift. Blue Peter have also come up with various forms of homemade calendar, including one made from an eggbox.

1In return for which, the British gave them Dinner For One without realising.