How to Swim the Butterfly Content from the guide to life, the universe and everything 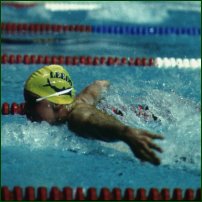 The butterfly is the most efficient swimming stroke, in that its motions create less drag than those of any other stroke1. It is a precision stroke in which the motion of the arms, legs and body build on each other to produce continuous motion. While in other strokes the body motion can be predominantly ignored without marring the basic efficiency of the stroke, butterfly requires specific torso movement, lest it degenerate into an ugly heaving and thrashing. Unfortunately, many swimmers and instructors don't properly emphasise the importance of unity of motion in the butterfly, giving the stroke a reputation as difficult and only for racers.

The body moves in a wavelike motion; while the head is out of the water (exposed until the chin), the feet are kicking under the water, providing an upward thrust. As the head slides under, the feet come up until the soles are out of the water. The feet then press down on the water, pushing the head upward again. During each cycle, the arms perform the same motion as they do in the front crawl, but do the motion at the same time. They describe a keyhole shape in front of the body from the shoulders to the hip, where they exit the water, arc forward like wings completing a revolution (hence the name 'butterfly') and enter the water extended in front of the head.

The first thing a student of the butterfly must learn is the undulation. It was developed by Jack Sieg, a University of Iowa swimmer, who tried to mimic the fluid motion that fish and eels use to propel themselves through the water. (He initially swam on his side, but later learned to do it face down.) A properly undulating swimmer will look and feel something like the monster that appears next to a legend reading 'Here Be Dragons'. As the head enters the water, the rear-end will pop out and the feet will follow shortly. As the head comes up, the rear-end will slide underwater and the feet will follow. A good undulation will propel the swimmer through the water without any other effort. In fact, don't sweep your arms or kick your legs while learning the undulation. It will dilute the purity of the motion and prevent you from learning its essence. If necessary, keep your hands tucked like fins under your abdomen and use them for short, paddling strokes.

A single undulation is like a modified surface dive. The swimmer tucks his chin, rolls his shoulders downward and slides his body under the water. Then he untucks his chin and glides back up. You can get a feel for the undulation by doing a continuous series of shallow surface dives across the pool. As you progress, the undulating should become shallower and shallower, until the wavelength is under one foot deep.

Knowing that you need to round your back and tuck your chin is often not enough. The key to a good undulation is entering the water forehead first. Repeat: your forehead should be the first part of your face to enter the water. Since, in swimming, knowing is rarely the same as doing, you need to concentrate on your face and forehead and feel your forehead entering first. It sounds strange, but it works.

The most common problem with undulations are flat backs — when the shoulders don't round downward as the head enters the water — and chin-first entries. If a swimmer looks like an injured whale trying to breach, something is wrong. If the undulation is thoroughly exhausting, the swimmer is probably diving too deep. Abdominal muscles may feel an initial strain, because they are doing most of the work.

Once you have mastered the undulation, throw in the kick. The kick for the butterfly is known as the dolphin kick, because it mimics the motion of a dolphin's tail. In the dolphin kick, the legs are kept firmly together and press downward on the water together.

The butterfly actually utilises two dolphin kicks: an upper and a lower. The upper kick happens almost automatically: when the head comes out of the water, the feet are pressed back in. This downward motion requires only a little extra pressure to become a kick. The lower kick is a second downward thrust made as the head is sliding downward and forward into the water, when the legs are at their lowest in the water.

Why it works: The dolphin kick is strong because it is created by the powerful thigh muscles. In addition, in the flutter kick or rotary kick the legs need to return to position — producing drag — before they can kick again. Because of the butterfly's undulating body movement, the legs slip into position for the upper kick (and partially into position for the lower kick) without creating any extra drag.

The arm action for the butterfly was developed by David Armbruster, a University of Iowa swim coach, as an out-of-water-recovery alternative for the breaststroke. However, the arm action in butterfly has more in common with the front crawl; the most significant difference is that in the butterfly both arms move simultaneously. They enter the water at the same time as the head, in front of it. They sweep outward, 'grabbing' the water, sweep back inward and then push backward to the hip, where they exit the water and return to the start position. There are, however, some important differences. In the front crawl, the arms trace a shape like an elongated 'S'. In the butterfly, the upper curve is more rounded, while the lower curve is more sweeping (this pushes the head out of the water for breathing). The shape when both arms move together is like tracing a keyhole pattern. Another difference is in the recovery. When front crawl arms return to position, the wrist dangles below the elbow and swings along the body. In butterfly, the arms are spread out over the water like wings.

The arms provide so much extra thrust that they usually disrupt the carefully-practiced undulation and kick. Don't worry: practice makes perfect and getting tangled is normal. Swim a few laps, first concentrating on the arm action and then concentrating on the undulation and kick. Then begin a lap by concentration on the undulation and throw in the arm action halfway across. After a few of this third type of lap, the motions will fall into place and rhythm will develop. A good butterfly has a steady 'splash-splash... splash-splash' rhythm to it, as first the arms and then the feet hit the water.

Why it works: Many amateur swimmers use a straight pull when moving their arms in the front crawl. Professional swimmers use the curved sweep instead, because it provides greater thrust. This is because a straight pull pushes the same water — and by the end of the pull, already-moving water — while a curved sweep constantly presses against new, stationary water that provides more resistance and therefore more thrust. The butterfly utilises the same hydrodynamics as the front crawl. When properly done, it creates a maximum amount of thrust per pull.

An underwater recovery, like in the breaststroke and elementary backstroke, counters the force of the arm action by pushing in the opposite direction. The butterfly's out-of-water arm recovery allows the arms to return to position without creating extra drag.

Strokes that use symmetrical arm-action, like the breaststroke and butterfly, are more balanced than strokes that use asymmetrical arm-action (like the front crawl). Propulsive forces on one side of the body tend to press the body in the opposite direction unless countered by an equal force from the other side. The simultaneous arm action in the butterfly makes it easer to stay aligned.

1Strangely, this does not make it the fastest. That distinction goes to the freestyle, also known as the front crawl.