'Doctor Who': Restoring and Reconstructing Missing Episodes Content from the guide to life, the universe and everything 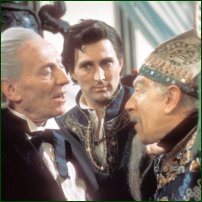 Note: This entry makes reference to individual stories from the TV series Doctor Who. For reference, see the h2g2 Doctor Who episode guide.

It might shock fans to learn this, but every single original copy of the 1960s Doctor Who episodes has been wiped. The first episodes were selected for deletion in August, 1967, while the last story to exist in its original videotaped format was most likely 'Fury from the Deep', which was wiped in late 1974.

The surviving episodes come from duplicates made for export that were held on 35mm or 16mm prints by BBC enterprises. BBC archives retained the originals but agreements with Equity (the actors and performers union), lack of demand for repeats of black-and-white TV shows and financial pressures led to the tapes being wiped and reused for new programmes. Meanwhile, licensing arrangements meant that BBC Enterprise's prints had to be jettisoned once overseas sales dried up. The last film recording to be junked was possibly 'The Time Meddler' in 1978. By 1981, 150 episodes of Doctor Who were completely missing.

As the value of archive material was realised, and public outrage at the loss of shows such as Doctor Who and Dad's Army increased, suddenly the priorities of BBC Archives changed. Thanks to the efforts of BBC archivist Sue Malden and her team, gaps in the archives began to be filled from various sources. Some were recovered from abroad, some were found mislabelled in parts of the BBC, and some were found in the National Film Archives. The most recently recovered episode of Doctor Who (as of 2006) was a 1966 episode 'Day of Armageddon', returned by a former BBC employee. Currently, a total of 109 episodes of Doctor Who are still missing from the archives, and are known as the lost stories. Much of the programme's early years, featuring William Hartnell or Patrick Troughton in the lead role, have gone, although many complete stories, scattered episodes and clips do survive.

Some are resigned to the fact that we may never recover a complete set of episodes. This entry documents the many ways that the existing episodes have been restored and additional material has been used to restore as near-complete versions of the stories as possible.

From these missing episodes, a large variety of material has been recovered in various forms, including the audio soundtracks and telesnaps from various episodes, along with short clips and amateur recordings of television screens made by fans.

In the days before home video, the only way for most people to keep record of their favourite programmes was to stick a microphone in front of the television and record the soundtrack onto magnetic tape. Thanks to early Doctor Who fans, the BBC holds a complete audio record of the lost stories, all of which are currently available on CD, restored by Mark Ayres of the Doctor Who Restoration Team, with accompanying narration by a member of the original cast.

Without surviving footage from the programmes they made, directors often found it hard to provide a sample of their work to their employers. This problem was solved by the invention of 'telesnaps' by the photographer John Cura. Using his own specially-developed technique, he would take a series of photographs of a TV screen to form a visual record of the programme.

Though many missing stories exist in this format, not all of them do. Not all of TV producers saw the value in this exercise, but for the show's second producer, John Wiles, they were an unnecessary expense so no telesnaps were commissioned by him. A few pictures do exist for the episode 'The Feast of Steven', commissioned by actor Robert Jewell to cover his performance in the production. Wiles' successor Innes Lloyd fortunately recommissioned Cura to take telesnaps for his stories, which means we have visual records of Hartnell's 'The Savages' and 'The Smugglers', the fourth episode of 'The Tenth Planet' and for most Troughton episodes up to the beginning Season Six. John Cura fell ill in late 1968, partway through photographing 'The Mind Robber' and died in April the following year.

The telesnaps archive came to light thanks to the work of a number of fans of the show, including: J Jeremy Bentham, who received a set of images from 'Power of the Daleks' from the serial's director, Christopher Barry; director Hugh David gave telesnaps of his 'The Highlanders' to Patrick Mulkern; and separate but simultaneous discoveries by Stephen James Walker and Marcus Hearn of the bulk of the telesnaps at the BBC's written archives in Caversham.

Though John Cura's pictures were a valuable find, they were also tiny, with each individual frame smaller than a postage stamp. They were enlarged for publication in selected issues of the Doctor Who Magazine (often referred to as DWM) and benefited from significant digital restoration for release on the photonovels section of the BBC Doctor Who website.

Scattered clips of lost Doctor Who stories survive, mostly because they were given to another show to use as material, or because the sequences were judged too violent for foreign viewers and removed from the episode. Samples of these clips are available on many BBC video and DVD releases, and can be found in full on the Lost in Time DVD boxset.

Occasionally, Doctor Who fans and members of the production team turned their 8mm cameras to the TV screen to catch a few seconds of Doctor Who that would otherwise have been lost forever. The resulting footage is poor quality, but it has most notably allowed us to see most of the Hartnell-to-Troughton regeneration from 'The Tenth Planet'. Again, this footage is available on the Lost in Time DVD boxset.

Existing mostly in private collections, there is no definitive collection of these photos, though they do offer a valuable insight into the set and monster designs of the early series, second only to the telesnaps.

A trailer for the lost story The Power of the Daleks has recently been discovered, but this is the only example of this kind of footage recovery. Mute footage on colour 8mm film exists from the Doctor Who stories 'Fury from the Deep', 'The Abominable Snowman' and 'The Smugglers', along with a black and white special effects film from 'The Evil of the Daleks'. Model shots occasionally survive, as do film trims from the stories 'Fury from the Deep' and the 'Space Pirates'. Studio footage exists for the pilot episode and others.

With all this material available, it's hardly surprising that thoughts began to turn to reconstructing the missing episodes. While BBC Worldwide focused on producing audio versions of the missing stories for commercial release, fan groups started work on making mock ups of the lost episodes out of sheer love for the show, combining telesnaps with the audio soundtrack of the episode. The first reconstruction is believed to be a single episode from the first Troughton story, 'The Power of the Daleks'. While the concept was novel, the quality was poor, and even with the audio soundtrack and the telesnaps, there were still many scenes in which it was unclear what was going on.

The reconstructions grew steadily more professional as the years went by. The quality got better, video clips were added and captions to explain difficult scenes. Currently, the reconstruction group Loose Cannon is only three stories away from reconstructing all the lost and partially-lost stories, using a range of techniques that include real life footage, model work and even CGI.

With its missing story CD catalogue completed, the BBC turned its attention to producing reconstructions. Its first release was, once again, 'The Power of the Daleks Reconstructed', on CD-MP3. While it attracted criticism in some quarters for not including the surviving video clips and 8mm footage (due to the technical limitations of the MP3 format), the volume seems to have been successful enough to merit future releases, with hopes for an eventually extensive range.

For the DVD release of the eight-part story 'The Invasion', from which two episodes are missing, the audio soundtrack has been combined with animation by Cosgrove Hall, the same company that made the popular Danger Mouse TV series. Again, it's hoped (by fans at least) that this could be one innovative way of finally having a complete set of episodes in the archives for the first time since 1967.