Federweisser - a German Must Content from the guide to life, the universe and everything 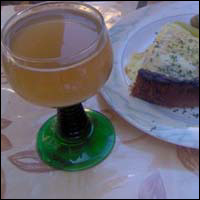 Federweißer is the German name for a sparkling must1 from the first harvested white grapes - often those grapes that lack the quality to making a good wine. It is also known as Sauser or, in Austria, Sturm (tempest2), and is usually available from the beginning of September until the end of October, depending on in which region the grapes are grown. It is usually served with a good slice of hot Zwiebelkuchen (onion tart). Red Federweißer3 is also available, but is not as common as the white variant.

Due to the fact that the wine continues to ferment in the bottle, the bottles need to be transported unsealed and in an upright position, or else they will explode. This is why Federweißer used to be sold and drunk only locally, ie, near the vineyard where it was produced. With modern methods of storage and transport, today you can get Federweißer in Germany that has come from as far away as Italy.

After the first grapes have been harvested, they are pressed, yeast is added to the juice and the product is bottled right away. The fermentation process starts immediately, the yeast breaking down the fructose of the grapes, creating carbonic acid and alcohol. The small yeast particles are stirred up by the carbonic acid, and look like small feathers, hence the name Federweißer ('White Feather').

Although the fermentation process can be slowed down by keeping the Federweißer in the fridge, it is best to drink it within two days after purchase, because the longer the process goes on, the stronger and less sweet and sparkly the Federweißer is going to be. With an alcohol content of about 4-5% when it is fresh, and its sweet taste, there is a risk of people consuming too much of it, ultimately resulting in them not being very well. To avoid this effect, high-fat foods like the aforementioned Zwiebelkuchen, or Elsässer Flammküchle (an onion and bacon tart) are usually served with it.

Federweißer contains lactic acids and vitamins B1 and B2 as well as the vitamins and minerals naturally contained in the grapes. The yeast by-products and the lactic acids help purify the body. However, consumption is advised in a measured way; not only to prevent drunkenness, but also because Federweißer stimulates the digestion and in combination with the consumed onion tart may result in a 'tempest' in your bowels.

Where is Federweißer Produced?

The main regions where Federweißer is produced are south-west Germany, parts of Austria and Italy. You can spend a good day out going, for example, to the Rheingau region, strolling through the vineyards and afterwards stopping at one of the many Straußenwirtschaften to enjoy their Federweißer and, if you are lucky, some homemade onion tart.

1The freshly pressed juice of the grapes.2Possibly due to its effect on the digestive system.3Made from red grapes.