Scottish Devolution and the West Lothian Question Content from the guide to life, the universe and everything 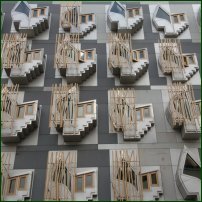 'When we had a king, and a chancellor, and parliament-men o' our ain, we could aye peeble them wi' stanes when they werena gude bairns - But naebody's nails can reach the length o' Lunnon'.
- Mrs Howden in Heart of Midlothian by Walter Scott (1771 - 1832)

There had been a Union of Crowns since 1603, when King James VI of Scotland also became King James I of England.

In 1979, a referendum for Scottish devolution was put to the people of Scotland. As less than 40% of the electorate voted, the result of the referendum (51% for 'yes') was rejected by the government.

The Labour Party won a General Election in 1997 after 18 years of Conservative rule. Before this Labour victory the Conservatives enjoyed a parliamentary majority in Britain, but did not hold a majority of Scottish constituencies, and some of their policies were very unpopular in Scotland. This contributed to the atmosphere preceding the 1997 referendum in Scotland for Scottish devolution.

In this vote, the 74% majority of Scots voted in favour of a Scottish parliament. 64% voted in favour of that parliament having tax-varying powers. The overall turnout was 60%. The Scotland Act was passed in 1998 by the UK parliament at Westminster. This marked a significant change to the British Parliamentary System, and has created the problem of the West Lothian Question.

Some Devolved and Reserved Issues

Devolved to the Scottish Parliament:

Reserved for the British Parliament:

Sewell motions can be passed by the Scottish parliament to allow a devolved issue to be determined at Westminster. They are named after Lord Sewell who introduced the policy while the Scotland Act was being passed in the House of Lords.

From the table below, it can be seen that Scotland's MPs are far outnumbered by those from England.

Total Number of MPs per nation:

In addition, the support for political parties differs by nation. Most notably, in the 2005 General Election the Conservatives came second in England overall, but fourth in Scotland. As all Members of Parliament have the same voting rights, Labour MPs from Scotland can be pressurised by their party into boosting pro-government votes for controversial legislation which does not affect their own constituents. The Conservatives are unable to counterbalance this as they have one MP from Scotland. As Labour only holds a small parliamentary majority, this issue is of particular pertinence.

Moreover, some government departments are concerned simultaneously with all of the UK in some areas and parts of it in others. For example: at the Home Office, immigration policy and drug laws are determined for all Britain. Yet the police, prisons and prosecution services are devolved in Scotland.

Proposed solutions to the West Lothian Question include:

Do nothing, accept the West Lothian Question as a quirk of the parliamentary system, and hope much of the recent controversy goes away.

This creates the problems of:

Also known as the so called 'in-and-out' or 'English votes for English matters' solution. This solution would give MPs different voting powers, depending on whether they represented a constituency in Scotland, England, Northern Ireland or Wales.

This solution is favoured by the Conservatives and is an oft-cited solution, but is one of the more problematic. Problems with this solution include:

Problems associated with this solution include:

This solution would involve:

The Foundation Hospitals Act was passed with the help of the votes of Scottish-constituency Labour MPs, as well as the SNP. The sole Scottish constituency Conservative MP abstained.

The Higher Education Bill (which introduced university top-up fees) was implemented with the help of votes from Scottish constituency MPs.

Dawn raids on asylum seekers and their children created protests, with opppenents objecting to a perceived excessive use of force. The first minister was criticised for refusing to speak on the matter, citing the fact that immigration is reserved.

The Scottish parliament was set up in 1997 to allow issues relating only to Scotland to be determined locally, without the permission of the British parliament. Issues of national importance are reserved to the British parliament at Westminster. The Scottish devolution settlement has created the problem of the West Lothian Question, whereby MPs from a Scottish constituency can vote on issues not affecting their own constituents. This problem is currently unresolved, and potential solutions would create new problems.