Green Day - the Band: From the Beginning to 'American Idiot' Content from the guide to life, the universe and everything 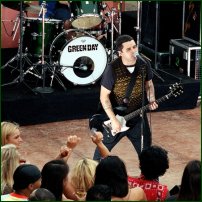 Green Day are an American punk rock band, whose mainstream success began in 1994 with their album Dookie. The band is currently made up of Billie Joe Armstrong, who plays the guitar and sings lead vocals, Mike Dirnt, who plays the bass guitar, and Tre Cool who plays drums and other percussion.

A Short History of Green Day

In 1982, in Rodeo, California, Billie Joe Armstrong and Mike Pritchard (later known as Mike Dirnt) met in their school cafeteria and formed a friendship and a band called Sweet Children. In 1987 they found a drummer, Al Sobrante, and changed their name to Green Day1. In that year they released their first EP2, called Sweet Children. They then released the 1000 Hours EP in 1989. Shortly after this release, in 1990, they were signed to Lookout! Records who released the Slappy EP and their first album, 39/Smooth. Shortly after the album's release their drummer left, to be replaced by Tre Cool (Frank Edwin Wright, III). They then released their second album, Kerplunk, in 1991.

Kerplunk was a huge success and after its release many larger record companies were interested in signing Green Day. The band decided to sign with Reprise records and in 1994 their third album, Dookie, was released. Dookie was an even greater hit than expected, thanks in part to MTV playing their 'Longview' video. The album continued to sell throughout the year as they brought out more singles and claimed more air time on MTV. Green Day also stole the show at 1994's Woodstock festival and the same year, won a Grammy for Best Alternative Music Performance. The album that was expected to sell 100,000 sold over 10,000,000 copies.

Green Day followed up the success of Dookie with the single JAR from the Angus3 soundtrack, which reached number one. After this they released Insomniac in 1995. This album was far less popular than Dookie, but is considered by many critics and fans to be more powerful. Their next album was called Nimrod and is considered by many fans to be their best album. Released in 1997, it includes the song 'Good Riddance (Time Of Your Life)' which is probably Green Day's most well-known song4. The song was almost left off of the album for being 'too girly' as it is an acoustic song without drums or a recognisable rock theme.

Three years passed and in 2000 they released another studio album, Warning. This album is noticeably different from their earlier music, being less powerful. They then released a 'best of' album called International Superhits in 2001. This contained all of the band's singles. This was followed in 2003 by Shenanigans, a B-sides collection. A year later, American Idiot, the multi-platinum-selling 'best reviewed album of their career' was released, and topped the charts in many countries across the world. The surprise success of American Idiot won them a Canadian Juno award for Best International Album in 2005.

It also won them a Grammy for 'Best Rock Album', along with five other nominations5 in the awards in 2005.

Billie Joe was the youngest of six children in a working-class family in Rodeo, California. His father was a truck driver and part-time jazz musician who died of cancer when Billie Joe was ten, his mother a waitress and diehard country music fan. As a child, Billie would sing at hospitals to cheer patients up. He also recorded a song called 'Look for Love' for the locally-based Fiat Records when he was five. The first album Billie Joe bought was Elvis Presley's The Sun Sessions. Soon after, a couple of friends got him hooked on punk bands such as DOA, TSOL, and the Dead Kennedys. At the age of 11, Billie got his first guitar, a surf-green Stratocaster copy that he plays to this day. He wrote his first song, 'Why Do You Want Him', when he was 14. Billie Joe is the co-founder and partial owner of the independent label Adeline Records.

Mike was born of a heroin-addicted mother and was put up for adoption. His adoptive parents divorced when he was seven, at which point he began dividing his time between their separate households. He met Billie Joe at the age of ten, and ended up working with his mother at Rod's Hickory Pit. At 15 he rented a room on the side of Billie's house. He married his then-girlfriend Anastasia in 1996, and his 'hero' daughter, Estelle-Desiree was born a year later. Although he and Anastasia divorced, they are still good friends, and he visits their daughter as often as possible.

Has Also Played With: The Lookouts, Samiam

Tre grew up in Willits, California, with his father and two siblings. His dad built many of the houses in that area, including that of Lawrence Livermore, their nearest neighbour and the founder of Lookout! Records. At the age of 12, he joined Livermore's band, the Lookouts. Shortly after Al Sobrante left Green Day, Tre hopped aboard. He has written many of the band's less serious songs, such as the hidden track All By Myself7, and Dominated Love Slave.

1999 - Austin Powers: The Spy Who Shagged Me Soundtrack

The official fansite can be found at greenday.net. Other sites which are owned and run by fans include The Green Day Authority, and Green Day.com.

1A green day is bay-area slang for a day spent smoking marijuana. Billie Joe wrote the song 'Green Day' about his first experience with the drug.2EP stands for Extended Play and refers to recordings which are too long to be classed as singles and too short to be classed as albums.3A film released in 1995, following the story of a shy 14-year-old boy with many problems.4In 1996 a less polished version of this song was released as the B-side of the 'Brain Stew' single.5Record of the Year; Album of the Year; Best Rock Performance by a Duo or Group with Vocal; Best Rock Song; Best Short Form Music Video.6A kind of Electric organ.7This song is about masturbation.