Ticks Content from the guide to life, the universe and everything 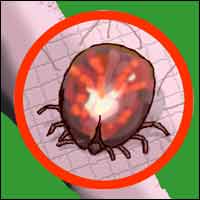 Ticks are small, parasitic bugs closely related to spiders. They will happily sit in trees, on ferns and on blades of long grass in a torpid state, only to be woken by the passing smell and warmth of a mammal. Then... they're off!

These little arachnids have followed mammals around the habitable globe, with ticks of the genus Ixodes occurring in every continent except Antarctica. Europe's most common tick is Ixodes ricinus, usually known as the sheep, deer or pasture tick, and like the most commonly encountered ticks of Australia (the scarily named Paralysis tick Ixodes holocyclus) and North America (Dermacentor variabilis, the dog tick; Ixodes scapularis, another deer tick; and the Western black-legged tick Ixodes pacificus) it is a 'hard' tick - one which has a chitinous shell much like an invertebrate. Soft ticks are less commonly encountered, as they only emerge from their hidey-holes for brief feeds, and they pop unpleasantly when removed.

Ticks begin life as tiny larvae, hatching from eggs in the summer. They wait on the ground for a small mammal (or sometimes a bird) to pass, and hitch a ride (this is known as questing). They spear the host with a barbed mouthpiece and begin drinking its blood, within a few days becoming gorged, until they drop off. Then entering the nymph phase, the little critters will again find a host and feed. They will commonly find a human host at this stage - and will probably get away with it, as they are still too small to be seen easily. Finally, they will sit as described previously in long vegetation awaiting a feed in the adult phase, and it is at this stage that they are most often detected by humans. Scarcely as big as a pin-head, they attach, drink and begin to swell.

The host brushes against the tick, which clings on tightly and looks for skin - preferably in a warm, fairly damp part of the body such as the crotch or armpit. Having found its favourite sweaty spot, it sinks its little fangs in and slowly begins to gorge itself with blood. Given favourable conditions, it will swell up nicely and drop off. If it is particularly unlucky, however, it may have been attached to a human - in which case, all sorts of fates may await it.

Russian scientists used to collect ticks for study by simulating a passing mammal; quite simply, they dragged a woollen blanket over the ground! A modern method uses a block of solid carbon dioxide (cardice); this attracts ticks and insects and is simply placed in the middle of a piece of cloth.

Some people don't like the idea of an eight-legged blood-sucking creature being attached to them or their pet for too long. Pulling them off os the best way of getting ride of them. It used to be thought that burning ticks off or smothering them in alcohol, vinegar, Vaseline, butter etc would make them fall off or suffocate and die respectively. However, it is well establsihed that this manner of tick removal causes regurgitation of gut and salivary gland content into the patient during the tick removal process and, thereby, increases transmission of Borrelia spirochaetes that cause Lyme disease (see below). The ticks should simply be removed by pulling off:

Make sure you know what you are doing - any of the self-help methods carry a risk as described below, and if you're not sure, follow the final suggestion. Leaving part of the tick in the flesh can leave you open to all sorts of infections, not just the ones listed below. As we will see, the risks of infection are not worth it.

Only mosquitoes carry more infections from animal to human. Removing ticks with tweezers can easily leave parts of it in the skin, leading to all kinds of infections, but the slower removal methods using heat and booze can leave the bug disgorging disease-laden blood into the body. Who says cigarettes and alcohol aren't bad for you?

There are plenty of diseases that are spread by ticks. Residents of or visitors to the UK and Europe are most likely to encounter the following:

Larvae aren't born diseased, but infected blood is spread through 'reservoirs' - small mammals and birds can have infected blood passed into them, which larvae feed on and pick up. This is the classic tick illness; a red rash at the bite site, leading to headaches and, if untreated, lifelong migraines, fever and joint pain. The only vaccine was recently taken out of production as it was considered unprofitable. There are a few hundred cases of Lyme Disease in the UK each year, while over in North America, 70% of sufferers are thought to have picked up the disease in their own backyard.

Again a disease spread by infected ticks (and occasionally through eating unpasteurised dairy products), TBE is a virus that affects the central nervous system. A week or two after being bitten, the human host experiences a whole range of symptoms, such as fever, migraines, muscle aches or vomiting. About a third of people go on to the second phase - taking a similar form similar to meningitis, meningoencephalitis or encephalitis. While only fatal in a tiny percentage of cases, a significant proportion suffer long-term, or even permanent, symptoms.

TBE is most prevalent in eastern Europe and Russia, and it is recommended that travellers who are likely to come into contact with ticks are vaccinated. Those working in the outdoors on farms or in woods are most at risk.

BBC News carried an interesting story in 2003. It claimed that, since the introduction of the UK Government's 'Pet Travel Scheme', more pets were coming into the country with tick-borne diseases such as babesiosis, leishmaniasis and ehrlichiosis. The idea that these diseases could spread into wild populations of ticks (and therefore wildlife and, possibly, humans) is a rather worrying one.

You can lessen the chances of getting bitten by using bug-repellents like DEET, by wearing light-coloured clothing and by minimising the amount of succulent flesh on display. Some would even go to the extent of suggesting you tuck your trousers into your socks, too, but most would rather risk Lyme Disease than go out looking like that.

Finally, if you're bitten by a tick and see any subsequent reaction, get it looked at. It may be just an allergic reaction - or it may not be.

1Some sources dispute the need to remove with an anti-clockwise twist, saying that clockwise works just as well. However, recent studies have suggested that tick mouthparts are unthreaded, and so there is no need for a twist at all.