Henderson's Relish - Made in Sheffield Content from the guide to life, the universe and everything 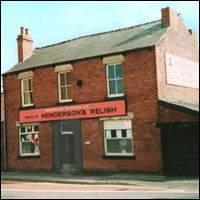 Surrounded by modern buildings on Leavygreave Road in Sheffield stands a small worn-out factory. To the naked eye it looks like any other rundown building, but just beyond the front door is where one of the city's rare treats is created. Henderson's Relish is a small family-owned company which concentrates solely on this special product. It has a unique taste, savoury and spicy without it being too hot. With a recipe which has been left mainly unaltered for over 100 years, the relish can improve any meal.

'Made in Sheffield for Over 100 Years'

The sauce was created in the 1880s by Henry Henderson, a dry-salter and wholesaler. After first being sold from his general grocery store at 35 Broad Lane, close to the company's present location, Henderson sold his business to Shaws of Huddersfield in 1910. Shaws then sold the company to Charles Hinkman in 1940. The reason for Shaws selling the company is unknown, although it is speculated that they believed the rationing caused by the war would reduce sales and make the rarer ingredients harder to find. The business moved to Leavygreave Road where it still stands today. The late Hinkman was appointed the managing director and the company is currently owned by his nephew, Dr Kenneth Freeman.

'For that Extra Flavour with Meat, Fish, Soups, Pies, Casseroles and Vegetables'

The basic ingredients are water, spirit vinegar, caramel colouring and a selection of spices from around the world. The relish, oddly, also contains saccharin: this is due to the recipe being mainly left unchanged from the years immediately after the Second World War, when sugar was scarce. The only ingredient which is unique to Sheffield is the tap water. It is thought that the quality of water in Sheffield has a distinctive taste and if the relish was to be produced in any other place that it would taste very different.

The factory workers consist of the company's family members and four members of staff. The ingredients are carefully weighed and measured by the family before being added to the vats. The sauce is mixed and stirred with a paddle by the production manager in the morning and left for 24 hours to allow the flavour to develop. Three members of staff then put the relish in 10 fl oz bottles ready for the production manager to deliver the product in the afternoon.

The Search for Relish

Henderson's Relish was unheard of outside of Sheffield for much of its history, but once the company decided to let everyone else in on the city's best kept secret it made the product available in many towns throughout Yorkshire.

One of the more unusual places that Henderson's Relish has turned up recently is in Iraq during the ongoing conflict. The company received a number of letters from Sheffield soldiers who requested bottles of the product be shipped across in order to make their food more palatable.

Most Sheffielders are brought up on Henderson's Relish and it can be quite a shock when they move away to find that they can't buy it. The company's official website has made its product available online for those who cannot go without. Although buying the product online is expensive, once you have eaten a meal that has had the delicious relish added to it, you feel that you cannot eat the meal again without the accompanying sauce.

Despite Henderson's Relish only having a minimal advertising campaign, the product still manages to sell around 750,000 bottles each year. The most effective method of marketing has been by word of mouth from its loyal customers.

Its traditional orange label is not altered very often. A special edition Desperate Dan Spicy Tomato Sauce has been produced, which was originally marketed at children, but was enjoyed by people of all ages.

The label was changed in 1993 for the FA Cup Semi-final match between Sheffield United and Sheffield Wednesday. Henderson's Relish was available with labels in United's team colours of red and white or Wednesday's team colours of blue and white. The relish is also advertised around the city's football grounds.

The sauce received free marketing when the Tesco supermarket chain removed the relish from its central computer. Henderson's Relish was marked with a discontinued label and its fans panic-bought the product fearing that the company was going out of business.

Although the traditional use of the relish is to be poured onto hot meals, especially Yorkshire puddings, it also has some more peculiar uses:

Henderson's Relish has a large fan base, including a number of Sheffield-born celebrity fans.

Sean Bean once purchased two gallons of relish after hearing a rumour that Hendersons was going out of business. Peter Stringfellow cannot eat a cooked breakfast without it, although rumours that Hendersons are responsible for his permanently-tanned appearance are unfounded. Richard Hawley, former touring guitarist with Pulp, was reduced to tears at the sight of a bottle of relish after finally returning home from a long tour:

My wife had made me sausage and mash with peas and onion gravy and I had this Henderson's Relish... I really realised I was home.

Many chefs use the relish in their recipes. The Sheffield-born private chef Martin Shaw, who works in California, has used the relish in preparing dishes of marinated ostrich and Opakapaka fish for the likes of Bill Clinton, Barbra Streisand and Dustin Hoffman.

Although there are frequent rumours that Henderson's Relish is closing for business or that the owner, Dr Kenneth Freeman, will retire and take the secret recipe with him, the company is still going strong.

Having Henderson's Relish with your meal is quite addictive. In February 2006, The University of Sheffield's research facility, the Sheffield Bioincubator, was built suspiciously close to the factory ... perhaps so as to discover the secret drug being mixed into the sauce.

There are currently no plans for the company to open more branches in other cities and there is no reason to move as long as it stays family-owned. Henderson's Relish is proud to be 'Made in Sheffield'.