Jan Ullrich - Cyclist Content from the guide to life, the universe and everything 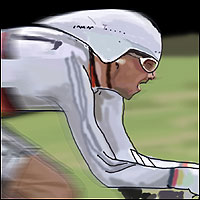 Born 2 December, 1973, in Rostock, Germany1, cyclist Jan Ullrich won his first bike race aged nine. In 1986, he was taken to study in the GDR's sports training system at the SC Dynamo sports school in Berlin. After the fall of the Berlin Wall, he moved with his trainer to Hamburg.

He was the winner of the 1997 Tour de France (to date the only German to do so), a gold and silver medal in the Sydney Olympics, winner of the Tour of Switzerland and the Tour of Spain, was twice World Time Trial champion and was set to be the next big multiple winner of the Tour de France until the race was dominated by Lance Armstrong. Jan still holds a unique record of having never finished lower than fourth in the Tour de France in the ten years he has been participating. Generally regarded (by Armstrong at least) as the most talented rider in the Pro Tour peleton, he is also possibly the unluckiest (which may explain his rather fragile confidence). Regarded as one of the best Time Trial riders for many years he has adopted a climbing style where he pedals a very big gear quite slowly, which makes it difficult for him to respond to attack.

In 1993, Jan became the World Amateur Road Race champion, that same year a certain young American called Lance Armstrong became World Professional Road Race champion. After this and other amateur successes, he turned professional and joined Team Telekom. In his first one and a half professional years, he was inconspicuous. In 1996, in his first Tour de France he claimed second place overall behind his then-teammate Bjarne Riis2. Jan claimed his first Time Trial win and his first ever Tour stage win that year.

During the 1997 Tour de France, he quickly became the favourite to win, despite being a teammate of the previous year's winner. Bjarne Riis was unable to keep pace with him in the mountains or in the time trials. After dominating the field in the Pyrenees, Ullrich won stage ten (Luchon to Andorre-Arcalis) from the more experienced climber Richard Virenque and won his first Yellow Jersey. The German press subsequently began to pay more attention to the Tour. He managed to hold off Marco Pantani's attacks in the Alps and limit his time losses, for this the French newspaper L'Équipe proclaimed, 'Voilà le Patron!' ('Here is the boss') as they started to consider him one of the top cycle racers in the World. With another stage win, he became the overall winner and at the age of 23, he was also one of the youngest. That year he became Germany's Sports Personality of the Year.

He was unsuccessful in the defence of his title in 1998. During the infamous 'Drug Scandal' Tour de France, Jan couldn't keep up with the relentless attacking pace of the eventual winner, the late Marco Pantani3. In 1999, he was forced to pull out of the Tour de France through a knee injury that still plagues him today. That Tour was won for first time by Lance Armstrong but Jan recovered in time to win the Vuelta d'Espana.

Despite being unable to break Armstrong's stranglehold on the Yellow Jersey in the Tour de France, he found himself crowned Olympic Road Race champion at the Sydney Olympic Games of 2000. He took the silver medal in the Individual Time Trial, beating Armstrong into third place. The following year was much the same, he was still unable to beat Armstrong in the Tour de France and he slid into a depression that was to blight him in 2002. In the May, he lost his driver's licence for drink driving; in the June he tested positive for amphetamines and his contract suddenly ended with his team Telekom. At the disciplinary hearing with the German Cycling Federation, he explained that he had taken Ecstasy in a nightclub that had been cut with amphetamines. The committee agreed that it had not been taken for performance enhancing purposes and suspended him for six months, which meant he missed the Tour de France that year.

He returned to racing in 2003 when he and his long-time advisor Rudy Pevenage were taken on by Team Coast but it was short lived when Coast pulled out of the sponsorship due to financial problems, after which Team Bianchi was formed. He finished second to Armstrong in a much closer Tour de France, he beat his rival in the Individual Time Trial and took a lot of time out of Armstrong's time on the following day's mountain stage but couldn't quite manage to capitalise on Armstrong's mistakes that year.

In 2004 he was taken back by Team Telekom, now renamed T-Mobile due to a change in sponsorship and won the Tour of Switzerland in preparation for the Tour de France. He finished off the podium for the first time ever, eventually finishing fourth and blaming his performance on a cold he had picked up from his newborn daughter.

In the 2005 Tour de France he seemed to get some of his spark back, successfully separating Armstrong from his 'Bodyguard' teammates and causing a little panic in the American's camp on no less than three occasions in the mountains. With a little help from his Time Trial skills and a lot of help from above, in the form of a disastrous Time trial for then third-placed Mikael Rasmussen, he went on to finish third, despite a couple of accidents and crashes during the Tour that year.

Constantly criticised and parodied for his weight, usually gained in the winter, he often has to take fairly desperate measures to get in condition for the Tour de France. Usually that means competing in fairly tough races like the Tour of Switzerland (and in 2006 the Giro d'Italia) to prove he is fit. He is quoted as saying he will retire in 2007 but that's yet to be seen, as he wants that one more win in the Tour de France. A very popular sportsman in Germany, possibly second only to Michael Schumacher and popular among his peers in cycle racing. He showed remarkable sportsmanship during the 2003 Tour de France when he waited for Lance Armstrong who had been accidentally knocked off his bike by a spectator. He never took advantage of the gains he could have made out of Armstrong's misfortune on that stage.

Operation Puerto and Beyond

On 23 May, 2006, Spanish Guardia Civil arrested Manolo Saiz (Directeur Sportif of Liberty Seguros-Würth Cycling Team), Dr Eufemiano Fuentes and three other people on suspicion of doping practices. In conjunction with this, several properties were raided and a number of anabolic steroids, 'packets of blood', machines to manipulate blood and a list of names (some of which were cyclists) were removed. When Jan Ullrich retired from the Giro d'Italia two days later citing back problems, rumours started to fly that his name was on the list found during the Operation Puerto raids. On 31 June, Ullrich was withdrawn from the Tour de France along with team mate Oscar Sevilla, joint favourite Ivan Basso and ten other riders. On 21 July, T-Mobile suspended his contract.

Ullrich won a case defending himself against Dr Werner Franke's media accusation that he had bought €35,000 of doping products. The court upheld Ullrich's complaint, saying Franke should keep his comments out of the media as his statement lacked solid grounds. Franke, in turn, took Jan to court claiming he'd lied under oath about taking doping products.

On 25 October, 2006, the Spanish court cleared Ullrich and Basso of involvement with doping, due to lack of evidence. The Swiss Cycling Federation4 has halted its investigation. Jan Ullrich announced his retirement from the sport on 26 February, 2007.

In 2012/13 Lance Armstrong finally confessed to taking performance enhancing drugs during his record-breaking seven Tour de France wins. Because the use of EPO and blood doping was rife among other riders during these years, including Jan Ullrich, the UCI, (cycling governing body), has taken the decision not to award those seven Yellow Jerseys to the next in line and beyond. Effectively, those seven Tours de France have been erased from all records.

1In 1973 Rostock was located in Communist-controlled East Germany.2Riis is now Sporting Director of the CSC Cycling Team, currently led by Ullrich's Tour de France rival Ivan Basso.3Pantani was expelled from the 1999 Giro d'Italia after a blood test revealed he had a high red blood cell count and was suspected of using the drug EPO. He was found dead from a drug overdose in 2004.4Although he is a German national, Jan Ullrich lives in Switzerland and rides with a Swiss licence.5Even though he retired in 2007 he still must serve this ban.