How to Win a Pint by Using Binary Arithmetic Content from the guide to life, the universe and everything 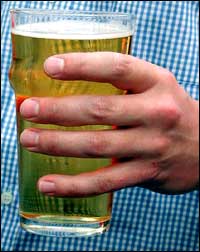 If you are happy to apply WC Fields' dictum 'Never Give a Sucker an Even Break', challenge your drinking partner to try to beat you in this game. Loser pays for the beer, of course.

The game can reasonably be called 'Last Shall be First' as the object of the game is to pick up the last match. One variation of this game is as follows:

The starting set up is to have three rows of matches, of 5, 6 and 7 respectively. (If you don't want to carry matches you can draw lines on a piece of paper to represent them, and cross them out in lieu of removing matches). Each player in turn removes either one, two or three matches from any one of the rows. Providing you know the correct strategy and your opponent does not, you can apply your knowledge to win every time if your opponent goes first. If you have the first turn, you still have a very good chance of regaining a winning position following your opponent's turn. (But if you want to play it fairly often, it is better strategy to allow your opponent to win sometimes).

If you memorise seven strategic combinations and leave the three rows with any one of them after your turn, no matter what your opponent does on her/his turn, you can achieve another strategic position on your next go.

The strategic combinations are:

Starting from 5,6,7 your opponent can take away one, two or three matches from any of the three rows, and so has nine starting options in total. To demonstrate your move, here are three examples:

Your opponent takes one match from the row of 7, leaving 5,6, 6. You take three matches from one of the rows of 6, leaving the strategic position 3,5,6.

The same procedure can be applied whatever first move s/he makes. When you look at what s/he has left, there will be two rows which will fit one of the strategic positions, and you remove matches from the other row to make all three rows fit the appropriate strategic position.

When your opponent takes the remaining match or matches from one of the rows, leaving only two rows, you then simply have to ensure that you leave the two remaining rows with equal numbers of matches each time that it is your turn. Similarly, if s/he leaves two rows with the same number of matches in them, and three or less matches in the third column, you need not check the strategic combinations. You only need to remove all the matches in the third column and leave her/him with two equal rows.

A Little Bit of Theory

It is not essential to know this, but for those who are interested, the strategic combinations all fit a pattern if converted to binary arithmetic. (Anyone needing a quick explanation of binary arithmetic can find it in the Entry on Number Systems). The pattern is that if the number of matches in each row is expressed in binary and then the columns of binary are added, the position is strategic if the sum of each column is 'even', ie either 0 or 2.

For example, if the rows contain 4, 6 and 7 respectively, these convert to binary as 100, 110, and 111. Adding these (not in binary) gives 321. Since two of these digits are odd, the position is not strategic. If three matches are now removed from the column of six, giving 3, 4 and 7, these convert to 011, 100 and 111, which add to 222, and this position is strategic. The important point is that when you leave a strategic position, no matter what your opponent then does s/he cannot achieve another strategic position, whereas you can convert whatever s/he leaves to another strategic position. Of course, when the number of rows is reduced to two, and you leave an equal number of matches in each, the totals of the binary digits in each column is automatically even (ie 0 or 2).

If you are really good at converting to binary and then mentally adding the columns and working out how many matches to take from which column to achieve another strategic position, and you enjoy doing things the hard way, you won't need to memorise the seven combinations. You will also be able to set a starting position with whatever number of matches you choose in each row, and work out the strategic combinations yourself as you play; unlike us lesser mortals, who will regard you with something like awe.