Moth Orchids - A piece of tropical beauty in your home Content from the guide to life, the universe and everything 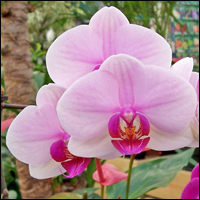 The beautiful flower of the Moth Orchid or phalaenopsis is so called because it resembles a moth with outstretched wings. There are several hundred species in this genus. Most are evergreen and mainly epiphytic1. Their natural habitat ranges from South East Asia to Northern Australia.

In the wild, they grow on trees under the canopy of rainforests. Their thick flattened roots adhere to the branches, much like ivy does to a wall. They produce long aerial roots, which take up moisture and nutrients from the surrounding atmosphere. Moth Orchids do not produce seed. The way that they propagate is by producing offshoots on the ends of some of their roots.

Moth Orchids have been hybridised by growers for many years, producing many variations in colour, increasing the number of species by hundreds. They range from vibrant pinks and mauves, through to whites, pale greens and canary yellow. The leaves of the Moth Orchid are fleshy and sometimes mottled. They are self-regulating, only carrying six or seven leaves at any one time.

The flowers are produced on a long stem, flowering from the bottom up. In the wild, the flower stem grows horizontally from the plant, so that they will be noticed by insects and birds. The unscented flowers can last for several weeks. The Moth Orchid is one of the easiest to grow as a houseplant, and adjusts well to changes in temperature between day and night.

You will quite often find Moth Orchids for sale at garden centres and florists. When choosing your Moth Orchid, ensure the leaves are firm to the touch and not rubbery. Also make sure that the plant is not standing in water. They prefer to be a little on the dry side.

Even though Moth Orchids do not require any soil to grow in, they are usually sold in clear pots in a special orchid compost. This is mainly to give the plant stability. The special compost is made of pine bark, which comes in either large pieces or a fine mix, with charcoal added to keep it sweet. Choose a plant that has only just started to open its flowers, as this will give you the longest flowering time possible. You will need to support the flower stem with a small spit cane, as the stem naturally grows horizontally. Make sure there are no dark black or brown blotches on the leaves. This is a sign of bacterial leaf spot which will eventually kill the plant if not treated.

Caring for your Moth Orchid

Positioning your orchid is very important. They do not like direct sunlight as it scorches the leaves and eventually causes the plant to die. Do not put your orchid into a cold, unheated room during the winter months because this will also kill your plant. Choose a light spot in the centre of a warm room, or a window that doesn't get direct sunlight.

It's not necessary to keep your orchid in its pot. You could attach it to a piece of wood or lava rock. If you are planning to do this, it is advisable to use moss as a bed for the orchid to sit on before attaching it to the rock or wood. This will help retain some moisture for the plant. Spray the aerial roots daily and once a month, add some orchid fertiliser to the water. The water must be at room temperature. Ideally, rainwater is best, but if you don't have any rainwater, boiled tapwater is fine. Do not be tempted to spray the leaves. If the water settles into the crown of the plant, it will rot and die. Instead, wipe the leaves with some wet cotton wool. It will thrive without the high humidity that it would get in its natural habitat as the temperature in our homes is much lower that that of the rainforest.

If you decide to keep your orchid in a pot, water it once a week in summer, adding orchid fertiliser once a month, and less often in the winter2. Your orchid will not need repotting very often, only when it has grown too large for its existing pot. When the time comes to re-pot your orchid, choose a transparent pot, as the roots like plenty of light. Also, use a special orchid compost mix to ensure your orchid stays happy.

Once your orchid has finished flowering, cut the stem back to the first lower node. This sometimes encourages the plant to produce new flowerbuds from the node.

When your orchid has finished flowering entirely, cut back the stem to one inch above the base. It may be another year before your orchid flowers again. At first, the flower shoot can be mistaken for a new root but unlike the root, which will turn silver-grey as it grows, it will remain green.

It's unlikely that your orchid will produce any offshoots. If it does, wait until the offshoot has produced its own roots and leaves. Then detach the small plant and pot into a clear pot with orchid compost.

In some countries, it is illegal to take any orchids from the wild, whether they are epiphytic or terrestrial3.

1Grow without the need for soil.2Only when the plant has become dry.3Growing in the ground.