Introducing the Raspberry Pi Content from the guide to life, the universe and everything 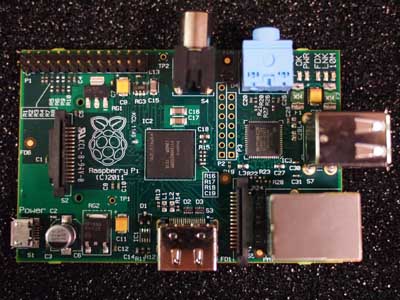 The Raspberry Pi (or 'Raspi') is a computer about the size of a credit card, designed to cost only £16 for the cheapest model. This includes a 700MHz processor, an HD-capable graphics setup, and at least 128MB of memory; there's also a memory card slot, audio/video outputs to connect to your TV, and a USB port for your keyboard, mouse and so forth. With all that, the computer uses less power than a lightbulb. It was developed by a group of Computer Science lecturers from Cambridge University, one of whom (Eben Upton) now works for computer chip designers Broadcom.

The Problem That Needs Solving

The original idea in 2006 was a response to the gradual drop in computing skills seen in students applying for computing degrees at Cambridge. Everyone knew how to use Microsoft Word, PowerPoint, Excel, Access; they didn't know much about coding, though, or what actually happened inside the machine. Considering Computer Science isn't about giving flashy presentations, this was a big deal.

Those familiar with schools in the 1980s will know they were full of BBC Micro computers, and everyone learnt how to write programs in BASIC or LOGO. Computer games back then ran on computers that were practically built for coding, and plenty of amateur enthusiasts now work in the computer science industry. Sadly, as computers have become more complicated, school lessons have changed to train students in simple computer usage, without understanding what goes on underneath. The sheer complexity and expense of computers also means that kids aren't encouraged to fiddle with them, and purpose-built games consoles now dominate where Sinclair ZXs, Amstrads and Commodore Amigas once stood.

Thus, the solution: make a cheap but very capable computer that can be used in classrooms, that can be replaced easily if broken, and that lets you play with computer code whether at school or at home. Make it so it plugs into the TV at home, like computers used to do. Ship it with a web browser so that students have access to no end of programming manuals via the Internet. Make it so it can be expanded with a chip to let it control robots. And it wouldn't hurt if it could handle HD video – which it can. There are, of course, similar efforts out there such as the BeagleBoard and the Pandora handheld console, but they fall down either on their expense, or their reliance on teaching trickier codes like C++ rather than the easy-to-learn Python.

Having had the original idea in 2006, Eben Upton and colleagues unveiled the prototype 'alpha' version in August 2011. Having corrected most of the mistakes, they went to a 'beta'-testing version, only to find that there was a link missing on one of the circuit boards – this was fixed using a scalpel and a soldering iron! The first ten beta boards were auctioned off to enthusiasts1. The first production line models were released at the end of February 2012.

In This Series of Entries

1One was immediately donated to a museum, which means at least a few people out there think this computer will be a game changer.