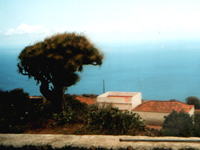 Mother Nature really did a pretty good job here. Not only the landscape's setting is felicitous, but also the subtle little details can only be judged as a labour of love: On the volcanic grounds of the island of La Palma grows an amazing variety of subtropical and alpine flora, living in perfect neighbourhood. There are about 1800 species to be found here, (not included the 600 brought to the island since the Spanish Conquista) amongst them 40 endemic species. Eg the so-called 'dragontree' is probably the most famous and surely the oldest plant in his homeland. During his possible lifetime of 3000 years it can easily grow up to a height of 20 meters – not so bad for a simple 'lily', is it? The oldest dragontrees are a band of three majestic exemplars and can be visited in the north-east, near Puntallana.

Other Places Not To Miss 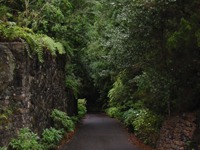 An amazing experience one can make on La Palma: In the morning you may have been sunbathing at the strand, in the golden sunshine of the typical holiday weather - dry and hot with the usual soft breeze coming in from the African continent. Then you go for a little excursion to the mountainside. You're crossing Santa Cruz, following the main street straight to the north, and after 30 kilometres of serpentine, (roads more or less under construction) you have reached a completely different environment. You will even feel the need to make sure you're still on the same island! The San Andres/Los Sauces region is much wetter than any other palmeric region.

Due to the altitude difference and some climatic conditions, this is one of the only places on earth where left-overs of the 'laurisilva', a sort of wood that some millions of years ago covered waste areas of the European continent, can be admired. The extremely endangered vegetation occupies little more than 500 hectares of land. It is a shadowy, dark green, kind of velvety place with strange forms and a very special flavour. A little bit like as if you're diving under-water, in a deep old lake. Before you enter the forest, you are sweating because of the heat. Under the trees you even sweat more because of the humid air – despite the fact that the temperature is sinking promptly. This is not at all comparable with the young, hot and damp atmosphere of a tropical jungle, neither with any of our usual middle-European forests. It's old, it's the greenest green you can probably imagine, it's as brumous as the backside of a waterfall and it smells like nothing else in the world. In the early eighties, the UNESCO declared the whole area a 'Biosphere reserve', so that nowadays there is a visitors point at the entry of the forest. Hiking trails cross the land and should be followed – it's surprisingly easy to loose your way inside the green thicket.

The Swimming Pools of Charco Azul – designed by Nature

After you have finished your walk in Los Tilos, you might like to jump into the natural swimming pool of Charco Azul. It's just a few miles to go from the laurel woods and it's worth the journey. Just follow the signs underneath the village of San Andres, right behind the banana plantation. The whole thing is made out of rock and was mainly built by the forces of the ocean biting bits off the cliff for another million years or so. The result consists of several pools, divided from the roaring surf of the Atlantic sea only by a small bank. The water is of a perfect, turquoise quality and if you are really courageous, you can try and swim to the open sea – only recommended for VERY GOOD swimmers!

By the way, on the official beaches you should look out for the danger signals. There are 3 types of flags:

If shopping is your favourite pastime then why don't you spend your holidays in Paris, London or Milano? Don't get me wrong, you can buy everything you need for life on La Palma, except you really need those Italian stilettos at a price of 500 Euro, but don't expect a hypermarket. There are small Mom and Pop stores named 'Spar' on nearly every corner, and they are much more fun than any big consumer paradise. For any agricultural products such as most vegetables, wine, cheese and so on you can simply ask your neighbours. They will describe to you the way to the next marketplace. If the next market day is a too far in the future, do your shopping at the next Spar. Local wines (and they are the best ones) can be bought directly from the producers, most of them vintage co-operatives. There's a big one in Mazo, on the road from the airport.

Other Places Not To Miss

'Geckos or geckoes. Any of various usually small tropical and subtropical lizards of the family Gekkonidae, having toes padded with setae containing numerous suction cups that enable them to climb on vertical surfaces.'2

Don't panic if you meet one or two of the above inside the house. It is a perfect normal place for them to be. To be honest, it is their house, because their right to live in it is based on the fact that they hold it free from flies. Every house should have one and according to the local tradition they also act as a talisman. Don't be stupid, they won't walk over your face while your sleeping – unless you have a bunch of flies on your head, and if so, why worry about another tiny little creature?

With the lizards, this is a completely different story. They can easily be distinguished from the geckoes by means of a remarkable lack of padded toes. They look more saurian-like and can grow much bigger. Plus they usually live outside the house. They won't bite or do you any harm, but can become a bothering plague. So see that your trash is carefully packed in hermetically closed plastic bags when you dispose of it beside the front porch.

Other Destinations That Should be Recommended