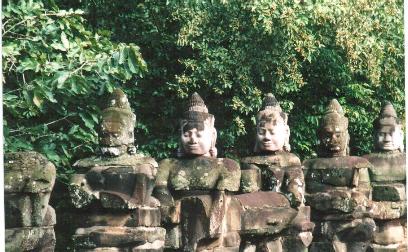 Only 7 of us managed to get out of bed in time for the morning tour. I hate to think how many would have made it if the weather had been better and the sunrise over Angkor Wat part of the tour hadn't been cancelled.

First port of call was Angkor Thom, which was the last capital of the Angkorian empire, a walled and moated city of 3.3 x 3 kilometres. We entered via the south gate, over a bridge lined with statues in varying states of repair. The gate itself was topped by a tower with four faces of Avolokitesvara 'the lord who looks in every direction',
facing the cardinal points of the compass. There are also elephants carved into the walls, along with numerous other figures. Just as we were about to get back into the bus we saw two live elephants walk through the gate. I managed to get my camera out just in time to take a few quick snaps as they walked through. They may look slow and lumbering but they actually cover the ground at a fair rate of knots.

Inside the walls of the ancient city are a number of temples including the Baphuon, Terrace of the Elephants and Terrace of the Leper King. Built right in the centre, and the main attraction, is the eerie Bayon, with its 37 standing towers, each one complete with four stone block carved faces staring out at you.

The Bayon actually looks a bit of a cluttered mess from a distance. Once you get close to the outside walls you can see that they are covered in incredibly detailed bas reliefs including battle scenes, market scenes and other scenes of everyday life at the time. Looking up you can clearly see multi faced towers everywhere. Whilst from a
distance only the better preserved faces are apparent, from this vantage point not only can they be seen, they can not be avoided.

After wandering through every door and walkway in the Bayon it was time to once more board the bus, bound for Banteay Srei, which is located a further 35 kms from town. As recently as 5 years ago an armed escort was recommended for this trip, however it is now perfectly safe and well worth the 3 hour round trip. 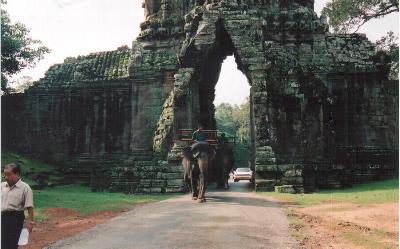 Kenny decided that we were all probably ready for a beer at this point, given that there was plenty of time to kill. He also told us a bit about life under the Khmer Rouge and how he believed Pol Pot wasn't dead but was in fact living in China. He claimed that no one had ever seen his face so how could they identify the body.

The road out to the temple was not what you would call a major thoroughfare, even by Cambodian standards. We crossed many small noisy metal bridges and one particularly rickety looking wooden number. I thought we were going to be joined by a cow at one point but our
driver somehow managed to avoid hitting it. There was water everywhere, rice paddies and otherwise, and wherever there was water there also seemed to be people fishing.

We finally arrived at Banteay Srei, which at first viewing is very disappointing, as there is not much of it remaining. What is still remaining, however, is made out of the most exquisite pink sandstone containing possibly the most beautiful carvings contained in any of the
temples we visited.

Just as the bus reached the outskirts of Siam Reap on the return journey we passed some of the non attendees on the backs of motor bikes. Apparently they had gone to see a cock fight, put on especially for them by some locals and had then gone to visit the zoo. Vinnie spent most of the morning unsuccessfully searching the markets for a
replacement tour mascot. 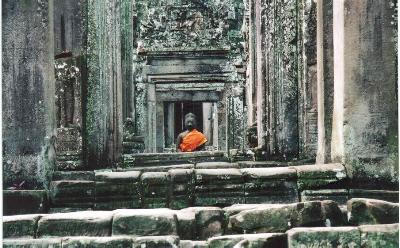 After a quick bite to eat the entire group joined the afternoon tour to the temple of Ta Prohm. There were no kids selling trinkets on the walk through the forest to the temple, but there were plenty of Cambodian Police selling their police badges. JR bought one, although I
don't think he got a chance to use it.

Built in the 12 century and rediscovered just over a century ago, Ta Prohm has been cleared of all minor foliage but all the huge trees have been left intact protruding through the towers, buildings and corridors. There is not much in the way of carvings and yet it was
probably my favourite temple. Shrouded in green moss and with the root systems of the giant fig and silk cotton trees entwined with the stonework of the temple it is truly a sight not to be missed. Once again my camera was given a serious workout.

Next stop was Phnom Bakheng, which is a very popular viewing spot to watch the sunset over the Tonle Sap lake. It is also possible to see Angkor Wat in the distance. Bakheng is a temple mountain, based on Mount Meru which is the home of the gods in Hindu mythology. It is also
built on top of a bloody great big hill. To reach the base of the temple you had to first climb the aforementioned hill in 35 degrees heat (unless you could afford USD $20 for an elephant ride) up a long, steep, rock strewn clearing and then climb up numerous almost vertical
stairways until you finally reached the top level of the temple. The view is spectacular which probably accounts for the massive crowd that was pressed into every vantage point waiting for the sun to set. Given the overcast conditions we didn't bother waiting.

Someone had carried a rugby ball all the way to the top and back down again. While we waited for the stragglers to arrive we amused the locals by throwing and kicking it to each other. Unfortunately for Bob L he decided to do a bit of haggling for a book on the temples instead. He had the vendor down to $4, until Case came along and 'helped' him
get it for $5.

Kenny arranged another cultural dinner for us, this time traditional dancing. On the way back we asked him to take us to a place with plenty of girls. A few minutes later the bus pulled up outside a full blown brothel. Not those kind of girls Kenny! That misunderstanding cleared up we were dropped in the main street near a number of bars, although not before he gave us a warning: 'We not worry about Aids in Cambodia...(he then made a universally recognised simulation of oral sex) we worry about Herpes.'

A few of the boys looked a bit white at this point.

The rest of the night is a bit of a blur. I remember a dodgy Karaoke bar, meeting the president of Cambodian rugby in another bar, Bob and I playing pool against 2 local girls and losing the first 5 games before coming back to win, and generally getting horribly drunk.

The scheduled morning boat trip on the Tonle Sap lake was going to be a real challenge!