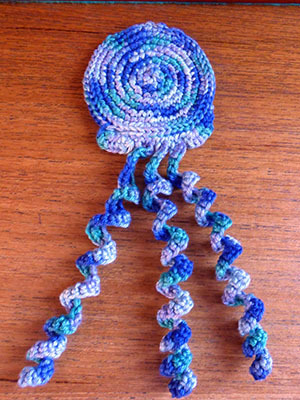 Like knitting, crochet is a way of fashioning fabric from threads. Unlike knitting, which requires two knitting needles, crochet requires one crochet hook.

Techniques for working with yarn and a hook date back hundreds of years and can be found around the world from China to South America via India, Turkey and Tunisia1. 'Shepherd's Knitting' was used to make nets and bags. The term 'crochet' (pronounced like 'crow shay') derives from the French for 'hook' (croche) and became popularised in 1824 through the publication of a book by Riego de la Branchardière. The patterns in the book translated embroidery and lace designs into the crochet form.

Crocheted lace for collars and cuffs on clothing became sought-after during the Irish Potato Famine (1845-1900)2 - many people in Ireland were able to make a living from 'Irish Lace', as it became known, and many earned enough to migrate to England or North America, bringing the craft with them.

There are a few basic crochet stitches. Like knitting, you generally begin with a slip knot3. You then use the hook to pull the yarn through the loop in various different ways depending on what you plan to make. There are various books available to teach yourself crochet if the craft has not been passed on to you by a family member, or you can find tutorial videos on the Internet (for both left- and right-handed crocheters).

Because of the history of the craft, there are similar but different terms for UK and US crocheters - something to be aware of if you find a pattern on the Internet, as things could go very wrong if you make the opposite choice!

What Can You Make?

Crochet can be used to make many things in addition to lace-like embellishments. You can simply crochet circular shapes to create clothing such as hats, or household items such as table mats4. You can crochet around yoghurt pots to make baskets for mini Easter Eggs. You can crochet squares that can be stitched together to make blankets. You can create larger items including dresses5. You can make toys or comforters using techniques from the Japanese art of amigurumi. You can even crochet mathematical objects.