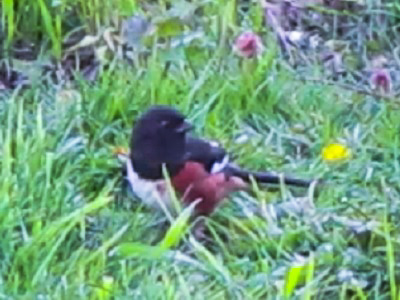 Sparrows: they're all brown, right? Okay, the Chipping Sparrow has a little red tuft on his head, but mostly they're all brown, black, and white stripes, right? No. The Eastern Towhee of North America, Pipilo erythrophthalmus, is here to tell you that sparrows can be bigger and brighter than you ever imagined. And tell you they do: even when they're hiding in the bushes, or moving so fast you can hardly see them. Look quick – that black, white, and orange wonder is, indeed a sparrow. If you're patient, he'll come to your seed-feeder.

Where They Are, How They Breed, What They Eat

The 'Eastern' in 'Eastern Towhee' refers to the eastern side of the North American continent. The birds are common in the southeast United States all year. During the breeding season, spring and summer, they're also a common sight in the northeast and parts of the Midwest. They may even venture into southern Canada, but they won't be seen as often there or across the Mississippi River. Towhees can have two broods a year – three in the southeast US.

Towhees forage in leaf litter and low shrubs. They move quickly. You're more likely to hear one than see one, but you can get glimpses of bright colour among the green shrubbery. The nest is in the shrubbery, too: an open cup of grass, twigs, bark, and even animal hair. To keep predators away, towhee males climb up in a tree and sing. The impromptu concert provides a nice, loud distraction. Hatchlings leave the nest after 10-12 days, but may hang out with the parents for a while after that.

The main enemy of the towhee in the reproduction business is the Brown-Headed Cowbird. This antisocial bird is a brood parasite: it throws out the towhee's eggs and substitutes its own. The towhee will hatch the cowbird eggs and raise the chicks.

Towhees like to eat seeds and berries, which is a good way to attract them to the bird feeder, but they eat a lot of insects. Their diet of beetles, caterpillars, moths, ants, spiders, snails, and millipedes makes them popular with gardeners. When you see a ground-hopping bird turn its head sideways, it's scoping out bugs. 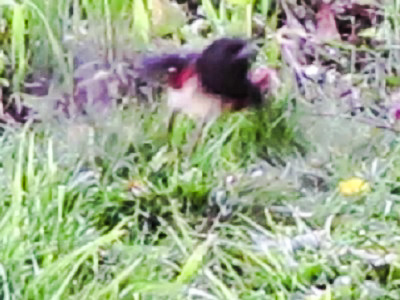 Towhees aren't very sociable. They like to spread out, preferring more territory than is strictly necessary for finding food. To keep other birds away, the males put on quite a performance: they lift, flick, or fan their tails in a display of towhee machismo. It seems to work. These solitary birds are fairly long-lived: the oldest one ever tagged was a twelve-year-old in South Carolina.

In Spanish, the towhee is called Toquí Flanquirrufo. In French, it's Tohi à flancs roux. Those are both languages spoken by people who might see a towhee. Before you ask: in Pennsylvania German, it's schewink, a version of its call-note.

Towhee calls are loud. The call, 'to-whee', gives the bird its name. It's also described by clueless humans as 'drink your tea'. To date, even though ornithologists are very interested in towhees, no towhees have been observed drinking tea. If the towhees have observed any interesting ornithologist behaviour, they aren't telling.