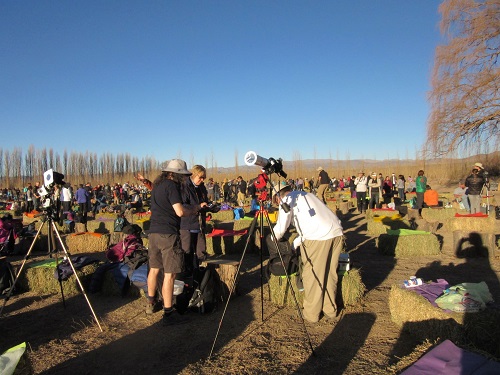 We had come a long way to see the total eclipse of the sun: Bella Vista in Argentina. That morning, we had set out in the bus from the city of San Juan and crossed two ranges of mountains where little grew except cacti and succulent plants. We seemed to be heading for the mighty Andes mountains, before we reached a place that looked like an oasis in the desert. There were rows of trees and a paddock full of alpacas.

When we arrived, the place looked like a country music event. There were rows of hay bales laid out for seating and a stage with a sound system, where a group was playing Latin American music. The field was surrounded by stalls, where local people were selling food, drink, gemstones and soap. Only the number of people with tripods, telescopes and sophisticated cameras indicated the real reason for the gathering. People milled about and chose spots to set up their equipment. For a while, we waited. At first, there was singing and dancing on the stage but, in the end, only the organisers' announcements remained. A couple of men inflated a hot air balloon and tried to persuade it to take off, without much success. The sky was clear blue, so chances of a good view were high.

At 16.25 a notch appeared in the bottom left of the sun. Everything fell silent and everyone watched through solar filters and special eclipse glasses. The dark crescent grew steadily larger and the light dwindled. Long shadows developed, creating a strange sort of twilight, and encouraging the alpacas to lie down. At last, the shadow of the moon moved over the sun, leaving the corona to flare in the darkness. We could see a swirl of coronal filament. Totality only lasted two minutes, before the sun began to emerge, giving a brilliant diamond ring effect. A notch in the top right of the sun followed but, by now, sunset was approaching. As the sun sank behind the mountains with a small notch remaining, everyone cheered. The total eclipse of July 2019 was over and we were heading home.

Poetry and Stories by minorvogonpoet Archive