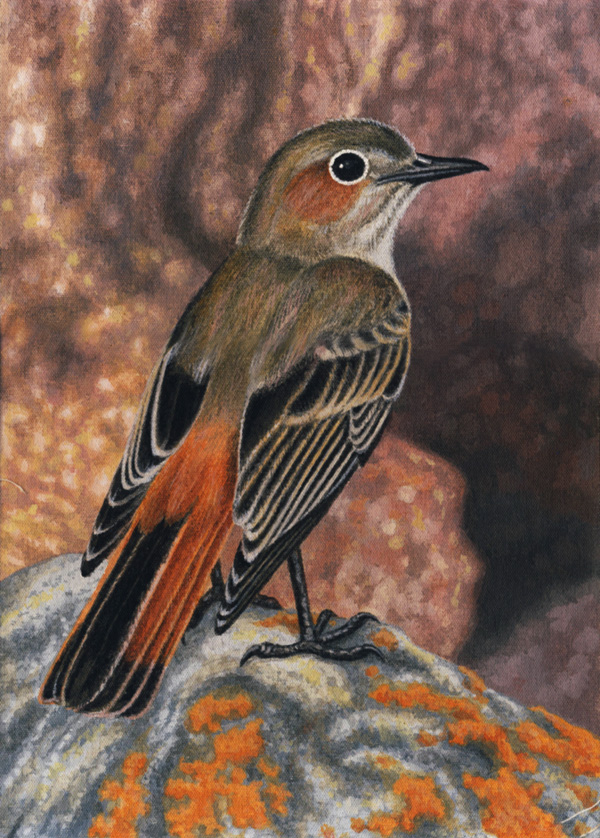 A little bird that would actually not be familiar to most of you, the Familiar Chat, Oenanthe familiaris, is more familiar to bird-watchers and rural people in sub-Saharan Africa. It occurs from Senegal to Ethiopia down to South Africa, avoiding the drier desert regions as well as moist rainforests. It prefers rocky country, whether savannah, scrub, woodland or grassland. Fearless and confiding, it has adapted to human farms and villages, where it scavenges edible scraps thrown or left out by people. In Afrikaans we call it a 'spekvreter' or 'bacon eater'. When the Boers were trekking north from the Cape Colony in the mid-nineteenth Century, they became well acquainted with these little birds visiting their camps. The chats pecked bits of fat from animal skins the Boers put out to dry, and even ate the fat, used as a lubricant, from the axles of their ox wagons.


The familiar chat is on first sight a drab little bird. It is overall greyish to brownish in colour, and the size of a sparrow. It has a bright rufous rump and outer tail feathers, though. The central feathers and the tip of the tail is blackish. This T-shaped tail pattern distinguishes it from similar and closely-related chats in South Africa. It also has a habit of flicking its wings outward one to four times, like a kind of involuntary tick, as soon as it touches down after a flight. Its call, like that of many other chats, is a short, harsh 'chak-chak', usually given when alarmed. It has a short song as well, more rarely heard, of peeps, churrs and trills.


What is a chat, exactly? Lots of birds named chats occur in Africa and also in Europe, Asia and Australia. They're generally rather closely related. Most of them are smallish, chunky birds, alert and confident, and with the typical harsh 'chat' or 'chak'-like contact or alarm calls. Several species have bold black-and-white markings. The chats, once grouped with thrushes and a huge variety of species named 'robins' in the thrush family, Turdidae, are now sometimes removed and classified in the flycatcher family, the Muscicapidae. These families, along with what used to be considered the single Old-World warbler family, the Sylviidae, are classification headaches, with huge numbers of species that on more recent examination seem to share similarities more on account of lifestyle adaptations than genetic relationships. Just in Africa, several groups have now been split off from especially the warbler and flycatcher families, while others have been reshuffled, and we still have numerous enigmatic species not yet examined closely enough. The Australian chats, at least, have long been known to belong to a quite different grouping, like many unique bird (not even to mention mammal) groups of that great island-continent.


Familiar chats themselves used to be grouped in the genus Cercomela along with a number of very similar African chats. Genetic studies show that these actually are not as closely related as they seem, outwardly. Familiar chats appear to be much more closely related to a group of chats, most called wheatears, in the genus Oenanthe, which includes African, Asian and European species. Along with a few other of those chats, it's now classified in that genus, while a new genus was created for the rest, so that the genus Cercomela doesn't exist any more.


But familiar chats don't seem bothered by the classification difficulties they present to scientists. Unassumingly they live their little lives on the fringes of human society. The first time I really noticed them was on a holiday in the magically-beautiful Blyde River Canyon nature reserve, in the late eighties; a little chat regularly came to visit our hut at the camp where we stayed. Since then I've encountered them frequently. Relatives of theirs followed our group of hikers as we slogged our way through the equally-magically-beautiful Fish River Canyon of Namibia, in 1990. I think more than one species was involved; I had not brought binoculars and was more interested in the scenery than the bird-life, but these birds were conspicuous by their tameness, waiting patiently for leftover food at each rest-stop we took.


In Nature, these chats actually eat flies most of the time – human food must be a nice change for them. They do eat small fruits and berries if they can find them. They perch conspicuously on rocks, shrubs and low trees, termite mounds, walls, windmills, tractors or other farm machinery. From there they spy out the region, flying off to snatch an insect if they see one. They are fond of foraging in recently-burnt grassland. If they catch a critter on the ground, they flick their wings on landing, and if they hop on the ground, they flick their wings at each hop, and if they fly back to their vantage perch, as soon as they alight they flick their wings while also raising and lowering their tails to show off the bright pattern.


In man-altered environments, familiar chats will use all sorts of nooks and crannies for situating their nests, such as holes in stone walls, or other spots around buildings. They seem unperturbed by human activity close by. One familiar chat built its nest inside the open end of a hollow boom that was used at a border post between Botswana and Zimbabwe. Each time the boom was raised to allow a crossing, the nest was tilted to an angle of 45 degrees, which didn't seem to discomfit the birds. More natural sites can be any kind of hole or crevice, such as between rocks or any hollow in a cliff-face, or holes in the ground or in earth banks, or disused nests of other birds, or even holes in trees. It is mainly the female that builds the nest, with little help from the male. The nests are made from all kinds of convenient materials. She builds a base or foundation from stones, pebbles, clods of earth, bits of wood and/or bark. Sometimes she uses human-made materials like nails. On the base she builds a cup structure using grass, roots and twigs, and she lines this with soft material like feathers, wool or bits of fabric or paper. She lays two to four greenish-blue, rufous-brown-speckled eggs. She incubates them alone, and when they hatch, broods the chicks. The male helps out with feeding them, and both parents keep the nests clean by either eating the chicks' droppings, or removing them and dropping them away from the nests. The chicks fledge in 15-18 days.


Familiar chats are abundant, widespread, highly adaptable, and not in any danger of extinction.