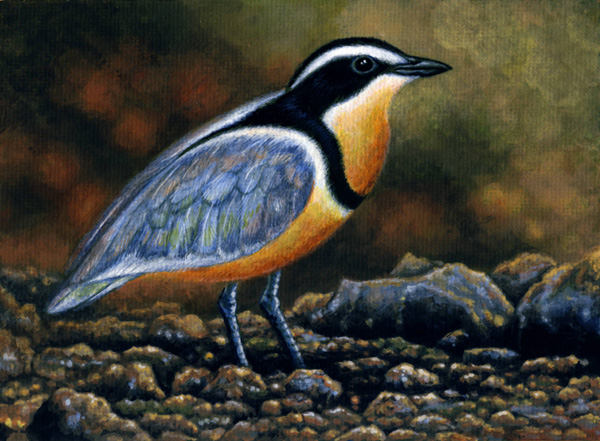 Here is another bird I haven't seen personally yet. This is the Egyptian Plover or Crocodile Bird, Pluvianus aegyptius. (The scientific name means 'Egyptian plover'.) Talk about inappropriate names! This bird is first of all not a plover; secondly it doesn't occur in Egypt; thirdly its association with crocodiles is at least partly mythical. What it is, though, is a bird that is not particularly closely related to anything else, and that only occurs in sub-Saharan Africa. Because of its uniqueness, it is presently classified in its very own family, the Pluvianidae. The species, and the entire family, is unique to Africa.


Let me speak a bit about bird classification. What, exactly, is meant by a 'family' of birds? It can of course mean a literal family: a mother and father bird, and their offspring. But when used as a term of classification of large groups it takes on a different but pretty rigorous meaning. In classification, the first 'unit' is that of a species. Even species can be hard to define, though in most cases its meaning is clear: a group of organisms that are outwardly and genetically similar, and under natural circumstances can and do interbreed with each other. Lions constitute a species, as do giraffes, as do tigers. The next level is genus. Typically a genus includes more than one species. Lions and tigers, though different species, both belong to a genus, Panthera, which includes all the largest of the cats, and which share some anatomical and behavioural features such as the ability to roar. Lions, tigers, leopards and jaguars are all members of the genus Panthera. These can sometimes interbreed but it happens very rarely or not at all in nature. By distribution and by behaviour the different species of a genus distinguish themselves from each other.


The next big unit up from genus, is finally what we're interested in – family. A family is a group of related genera (the plural of genus) and all the species they contain. So, the lion, tiger, leopard and jaguar are all, together with the species in a number of other genera, in a single and well-defined family, the cat family. That is quite an intuitive family; most of us can easily tell if a wild predator is a member of the cat family or not. Other clear-cut families are the dog family (which also contains foxes and wolves) and the bear family (which also includes the great panda, but not the red panda). Not all mammalian families are equally clear-cut. In the raccoon family, for instance, we find a variety of critters that not many people would immediately associate with each other: raccoons, coatis, kinkajous, olingos, cacomistles. Though outwardly dissimilar, anatomically and genetically it is clear that they are all related enough to constitute a family. Several mammalian families are like that.


As with mammals, so with birds and other living things. In birds, some 'easy-to-grasp' families include the penguin family, the dove-and-pigeon family, the falcon family, the crane family and the duck-and-goose family. Some groups that we might consider a single family turn out genetically to be divided into two or more groups, so we have two owl families and three kingfisher families. Most families were first named and classified in Europe. But most bird diversity exists in the tropics. When moving on to the classification of tropical birds, European naturalists have been baffled and confused. The diversity is very high, and contains both birds that have rapidly become very different from their close relatives, and birds that have become very similar to other not closely related birds due to similar lifestyles. Some bird families of the tropics are incredibly big and varied, like the Cotinga and Tanager families of South America, and the tropical African and Asian Bulbuls and Babblers. We are still trying to sort them all out; as we investigate them genetically, we are getting many big surprises, realising that some of the things do not fit where they outwardly would seem to belong. What we have right now, is a small number of utterly huge families, containing hundreds of birds each, together with a moderate number of medium-sized bird families, while out of this lot have fallen a number of birds that seem so isolated from anything else, that we have to classify them, perhaps with one or two close relatives, in their own families. They simply are not closely enough related to anything else. On their own, they represent huge 'chunks' of genetic diversity.


This is the case with the Egyptian plover. Its closest relatives are other birds in the shorebird or wader order, the Charadriiformes ('orders' being the next step up from families). Plovers, sandplovers, sandpipers, coursers and pratincoles are all similar birds, and related, but not closely related enough to share a family. For some time, the Egyptian plover was lumped in with the coursers and pratincoles in the Glareolidae, but differed from them – from the coursers in its short legs, and from the pratincoles in its shorter wings and less of a fast-flying lifestyle. Finally scientists decided to award it its own family, so it's no longer a matter of trying to shove it into a box into which it won't fit. It is now one of a small number of birds worldwide that constitute their own families; in Africa we have a few such families containing just one or two members, such as the Ostriches (perhaps two species), the Secretarybird, the Hamerkop, and the Shoebill. The Egyptian plover joins their ranks now. It is a matter of pride for Africa to have its number of endemic families (that is to say families that occur here and nowhere else) extended by one more.

Tales have attached themselves to these little birds: that they help crocodiles with some free dentistry! The story goes that crocodiles basking on the sandbanks of tropical rivers will lie motionless with their mouths open; the plovers will then come flying and jump in and peck bits of meat from between the crocodiles' teeth. The big crocs will placidly allow this, even when just snapping their jaws shut would reward them with a small meaty (and feathery) morsel, because this cleaning service keeps their teeth healthy. This story was written up in the times of the old Romans by the writer Herodotus; it has been repeated since then. Many people somehow concluded that the story bird – which was given the name 'trochilus' – was this species. It was illustrated as such in a bird sticker book (you collected the stickers by buying soft drinks and then stuck them in the right places in the book) which my parents got me as a kid. The illustration shows a bird inside an open crocodile mouth; if you go on Google right now, you'll find more such pictures of plovers in crocodile mouths. The problem is, they're all photoshopped! As far as I can tell, never has it been reliably witnessed that these plovers, or any other birds for that matter, actually peck food from crocodile teeth. Indeed, we're not even sure that the bird 'trochilus' refers to them rather than to another species, or whether it might be an entirely made-up bird. In the old days the naturalists were not as meticulous in properly observing and truthfully saying what they saw as modern scientists are, or at least should be. Sadly, so much for a cool story.


But rather than mourn what these birds are not, let's appreciate what they are. Firstly they're very pretty, with very neatly delineated plumage colours: Black, white, grey and buffy orange. Apart from the colouring you can see in my painting, they also have bold black and white bars on their wings, visible when they fly. They live on sandy river banks, pecking up invertebrates and other morsels they find on the ground. They live in pairs or small groups. They can run rapidly over the warm sand, their short legs a blur. They fly well, and when one of a pair lands close to its mate, they will engage in a short display with the wings open and raised to show off the neat pattern.


An especially unusual aspect of the breeding behaviour of this bird is that it doesn't incubate its eggs. They lay them out on or in the sand of the riverbank. If you've ever been in the tropics on the banks of a big river you'll know that it can get extremely hot; try to walk barefoot and the sand will burn your feet! So these birds, rather than sitting on their eggs to keep them warm, will have some work to do to keep them cool! They wet their belly feathers in the water of the river, and then sit on the eggs with their wet bellies so the moisture can cool the eggs. They also guard them against predators such as mongooses and monitor lizards. When a predator approaches, the mother or father will quickly smooth the sand over the eggs and leave.


When the one or two chicks hatch, the parents use similar tricks to keep them comfortable. The wet belly feathers now not only cool the chick down, but give it a drink also. In this they're similar to the sandgrouse, a quite distantly related group of birds, that routinely give their chicks drinks from wet, spongy breast and belly feathers. The sand-burying trick is also used, the parents quickly throwing sand over the chicks to conceal them from approaching predators! The chicks are not completely helpless; they are born open-eyed and downy and can soon run and get their own food. They accompany their parents for a while, even to adulthood, forming a small family-group, but may leave to form their own units as soon as they can find mates.


Today these plovers occur mostly in a broad band of land south of the Sahara Desert, from the Gambia in the west to Ethiopia in the East. They occur in s much smaller patch of land south of the equator, in Gabon, Congo and the DRC, sadly not in South Africa. In all these regions they are associated with sandbars on the banks of large, slow-flowing rivers. They can be tame and approachable around human settlements. They migrate around in response to rainfall, which may cause rivers to rise and fall and thus expose or flood the sandbanks they live on. The species is not endangered at present.