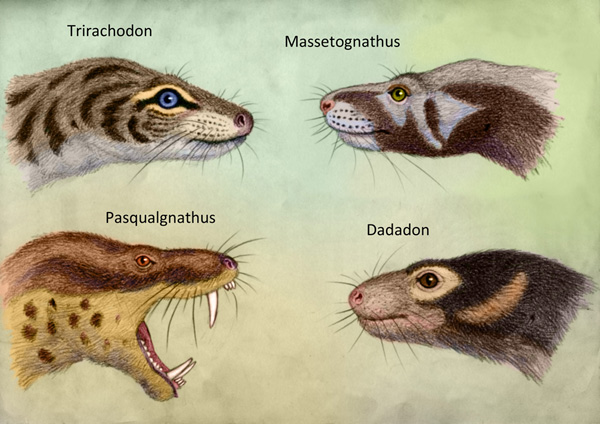 As promised, we'll now take a look at some advanced cynognathans. In case you missed the previous paleontological article, cynognathans ('dog jaws') were among the most mammal-like of the proto-mammals, before they became true mammals.


Here are some cynognathan faces, reconstructed with a bit of imagination. I use drawings or photos of the skulls, then flesh them out, and in the case of these mammal-like critters, add some fur and some coat colours and patterns as well. Those are all my own invention. The skulls themselves give a lot of information. The kind of teeth show whether the animal was likely carnivorous, omnivorous or herbivorous. With these very advanced cynodonts, the teeth were very much similar to modern general-purpose mammals. At the front of the jaws, were the cutting incisors; behind them, the stabbing canines, and at the rear, the grinding or meat-shredding molars. The depth and width of the skull tells us about the strength and extent of the jaw muscles. These cynodonts tended to have skulls that flared wide just behind the eye and the corner of the mouth, to accommodate the jaw-closing muscles. The eye sockets show the size of the eyes, with particularly large peepers suggesting that their owner might have been nocturnal. It's quite likely that some or many nocturnal cynodonts had slit-pupils like those of cats. Pits in the skull, especially the snout region, indicate that there were channels for nerves, which might have been associated with sensory bristles or whiskers. If they had whiskers, they would have had fur, and while some artists portray these old things as sparsely-haired, I don't see why, if they had fur, they could not have had lots of fur. I am quite certain that these were some of the world's first fuzzballs – fur would come in handy in animals active by night, especially if they were small.


Other clues in the skull include a bony secondary palate. Earlier, more reptile-like proto-mammals did not have this: their nostrils opened into their mouth cavities, so they could not breathe through their noses while they fed. Cynodonts, especially the advanced ones, had a palate separating their mouths from their nasal passages, and so, could chew continuously without every now and then gasping for breath. This again translates into better food processing and a more active lifestyle. They also had turbinates, which are shelves and whorls of bone and/or cartilage in their nose cavities. These in life were overlaid by tissues and membranes, which helped both in cooling down (in warm climates) and heating up (in cold climates) as well as moisturising the air as it is breathed in. Again, this meant more effective breathing, together with a faster breathing rate.


The snouts of these cynodonts were, however, still primitive in one respect: the front of the snout still had bone support. In most present-day mammals, the bones of the skull are 'open' at the front of the snout, there's no bony support there. This means the snout itself is muscular and free to move. In most mammals, this movement is minimal, but it is there, and of course in animals like elephants it is extreme. There is no bone inside an elephant's trunk – if there were, it wouldn't have been mobile. These old cynodonts, with the bony snout supports, would not have had this kind of snout mobility. Their snouts would not have been quite so fleshy and extensive, and likely their sense of smell was somewhat inferior to that of (most) modern mammals as well.


The final wonderful clues in the skulls involve a part not seen in my drawings: the bones at the rear of the jaw. In more reptile-like proto-mammals (as today in most reptiles, still), the lower jaw consists of several bones: the dentary, articular, angular and surangular. The articular initially formed the hinge of the jaw, articulating with another bone in the skull called the quadrate. In addition, near the jaw hinge, there was another small bone, the stapes, which functioned in supporting the outer part of the lower jaw against the rear part of the skull. Very soon this small bone appears to have been co-opted for transmitting vibrations (that is, sound) to the inner ear and brain. This sound-conducting system was still very rudimentary in the earliest proto-mammals, the pelycosaurs. Soon there developed a structure called a 'reflected lamina', or a ridge of bone turned outward, in the angular, close to the rear of the jaw. This could have been a support for an outer ear-drum; the hollow formed by this bony projection would have been like a 'bowl' to catch and focus sound. The angular soon became much smaller. The smaller the bone, the higher and softer the sounds it can pick up. Over subsequent evolution, the reflected lamina of the angular became a thin ring of bone supporting the eardrum, which went from a position on the outside of the skull, to hidden deep within the skull. The articular bone also became smaller, as did the quadrate. These eventually detached entirely from the rest of the skull and became an exquisite sound-conducting system in the middle ear. In modern mammals, the articular is now called the malleus, or hammer; it is a small bone attached to the eardrum, vibrating along with it when sound hits it. The malleus is connected to the incus, or anvil – the old quadrate – and sets it vibrating in turn. The incus next connects with the stirrups, our old friend the stapes. And the other end of the stapes connects with the oval window of the inner ear, from where the vibrations are now converted into nerve impulses that go to the brain.


The very advanced cynodonts are in a situation just short of the fully mammalian condition: the bones at the rear of the jaw are highly reduced, but they still connect with all the other jawbones, and they still function as a jaw hinge in addition to already being sophisticated in the way they respond to and conduct sound. I will at some time devote an entire article just to showing you the skulls and the bones and just how they all changed and adapted, all the way from the essentially-reptilian condition of the pelycosaurs, to the fully mammalian system – which indeed has a few different permutations in different modern mammalian groups, but all similar in that the middle ear bones are fully separated from the rest of the skull. The whole process has been captured in stone in the best-reserved specimens and is a wonderful demonstration of evolution in practice.


Good, and now just to identify these four faces and tell you a thing or two about them! Upper left is Trirachodon ('Three ridge tooth') from South Africa. It lived in the lower to middle Triassic, and thus is rather old for an advanced cynodont. It was more advanced than the similar Diademodon (see previous article) in that its cheek teeth occluded, that is to say met precisely, for meticulous food grindage. It might have been omnivorous. It was about the size of a cat. Like the earlier Thrinaxodon, it lived in burrows, which had wide entrances branching into numerous tunnels, in which colonies of as many as fifty animals could live. This means it was a very social species and likely had intricate behaviour. Living in burrows gave it protection from predators as well as from excessive heat or cold. It might have been nocturnal, or active at dusk and dawn.


Below Trirachodon is Pascualgnathus, 'Pascual's Jaw', from South America (named for Dr. Rosendo Pascual, a palaeontologist from Argentina). A bit larger than Trirachodon, it was distinguished by very long canine teeth. In spite of its fearsome appearance, it was likely largely or wholly herbivorous. It lived in the middle Triassic, about 235 million years ago.


On the upper right, is Massetognathus, 'chewing muscle jaw'. It lived in the middle to upper Triassic, 235-221 million years ago, in South America. It belonged to a family of cynognathans called 'traversodonts'. With a skull of up to 20 cm/8" in length, it reached the size of a fox. Massetognathus is known from abundant fossils, and must have been a common and successful animal of its time. It, too, lived socially and inhabited burrows. It shows adaptations for effectively chewing plant food, and significant transformations of the quadrate bone (see above) towards the mammalian condition. The deposits in which their bones were found, in Argentina and Brazil, are very thick layers of mainly volcanic dust and ash, and the death and preservation of many of the associated specimens, might be attributed to volcanic eruptions.


Lastly at the bottom right we have Dadadon '(Dada(?) tooth') from the middle Triassic of Madagascar. It was the size of a small cat. Not much info about it is available online, but it was a traversodontid like Massetognathus. It is interesting that fossils of this group, mostly associated with South America, were also found on Madagascar. They're generally rare in Africa (though a large one, Aleodon, is known from Tanzania). In the Triassic, the southern continents, Africa, South America, Antartica, and Australia, were still all connected, and what became the Indian subcontinent, and Madagascar, were linked with them as well. For some reason, in South Africa the records of proto-mammals dries up in the middle Triassic, and for later periods, we have much more abundant fossil evidence of them from South America. This might not be because there weren't many of them in South Africa, but rather because the conditions for forming and preserving animal remains as fossils, started changing then. In our next instalment, we'll be looking at some advanced South American cynodonts of the late Triassic, and also at their world and the other species they shared it with.