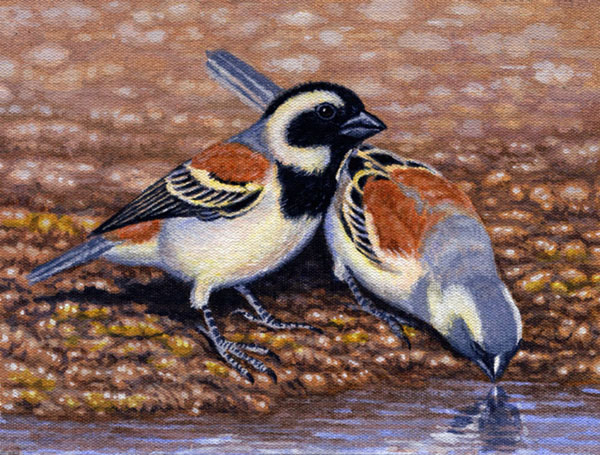 Continuing the theme of 'unremarkable' birds, here you have a pair of Cape Sparrows. This bird is one of the most abundant species of South Africa. A couple was depicted on our old one-cent coins, referring to Jesus telling about how two sparrows could be bought for a penny. I think today they're worth far more than that!


We have three indigenous 'proper' sparrow species: the Cape, the Great, and the Grey-Headed. But we also have an introduced species that has become super-abundant, the House Sparrow from Eurasia. This same species has also been introduced in many other places throughout the world, and is very common in America. In South Africa, the Cape and the House Sparrow are competitors, both being adaptable and flourishing in man-made or man-altered habitats. In Polokwane, house sparrows are more common, but the Cape sparrow flourishes in drier areas. It is strangely absent from the subtropical Lowveld in the north-east of the country, but occurs everywhere else in South Africa. It occurs marginally in Zimbabwe, is common in southern and south-eastern Botswana, and occurs throughout most of Namibia, entering the southwestern corner of Angola. The male Cape sparrow is easy to identify from his black crown, face and bib. In the female, the black is replaced by grey; she can be confused with females of the other three sparrow species, but is generally richer and bolder-coloured. Both are actually very handsome birds if you take time to really look at and admire them.


Cape sparrows are very adaptable. Likely already abundant before Europeans settled South Africa, they've benefited from changes humans made to the landscape, like fields of grain for food, and for nesting they utilize telephone and fence poles, houses, and planted trees and bushes in desert areas. They are plentiful in suburbs and sometimes even in the city centres. But they still occur in wild places far from human habitation, favouring open and varied environments like grasslands or semi-deserts relieved by tree-lined rivers. Like other sparrows, they eat seeds and grains, but are versatile and also consume insects (especially flying termites) and fallen fruits. They find most of what they eat while hopping on the ground. Where food is abundantly available, they associate without much conflict with other seed-eating species such as canaries, weavers, bishops, and other sparrow species. They sometimes form flocks, but mostly are seen in pairs or small groups.


Of the sparrows in South Africa, the Cape has the prettiest song. It consists of a short but melodious sequence of chirps, often-repeated. It has a shorter single chirrup as a general-purpose call. It is mainly the male that sings. His call also serves as a mating signal. A male that wants to charm a female, will chirp and puff out his chest, while drooping and quivering his wings, and raising his tail and bill upwards. If the female is receptive, she will assume a submissive posture and let the male mount her.


Previously, sparrows were classified in the same family as the weavers. They've now been separated into a family of their own. They don't weave intricate nests, instead shoving a bunch of grass and other plant matter together in a big untidy dome, with a side entrance leading to a central cavity, which is lined with soft stuff. The lining sometimes incorporates strongly aromatic plants, which is thought to be repellent to parasites. The nest is in a tree or shrub, or on a building or post, or taken over from another species which has abandoned it. Sometimes sparrows nest in small colonies. Breeding can be at any time of the year, and eggs usually number two to five, but as many as twelve have been recorded (but this may be due to more than one female laying their eggs in the same nest). They're pale green with brown speckles or blotches. Both sexes incubate and care for the young. In good years, a sparrow couple can raise several broods. Cape sparrows often raise the chicks of Diederik cuckoos. I often wonder if they're really duped by the cuckoos, or whether they actually realise the chicks are not their own but raise them anyway, being incapable of letting a helpless young thing just starve.


For now, these little charmers are very abundant and in no need of conservation measures. The day that they are, will be a dismal day, for if they won't make it, hardly anything else will.