Another Road to Nowhere 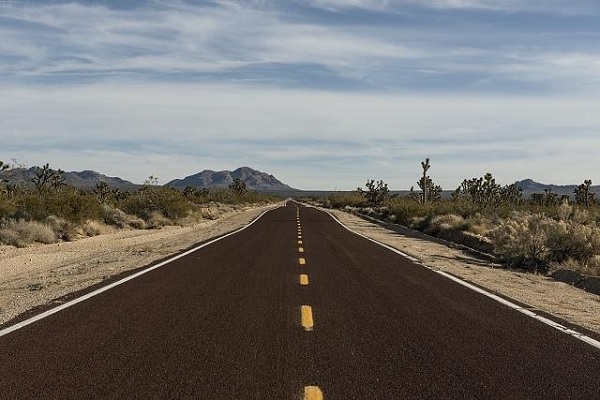 The thing about h2g2? One discussion leads to another. A couple of weeks ago, we were talking about this poem, as one does. The poem was 'inspired' by the Carol Highsmith photo shown above. We were speculating on futility, when Caiman raptor elk remarked thusly:

Sometimes the nothing "there" is still better than the one you already have.

The picture reminds me of a fruitless hitchhiking attempt in France. Similar road (not as dry though) and no cars at all. Had to walk the lot.

To which the Editor replied that this would be a very welcome story. Caiman raptor elk obliged:

The details are a bit hazy1, but I'll give it a try.

I was walking with a friend in the French Pyrenees on one of the long-distance trails toward Santiago de Compostela (not for any religious reasons, though). We were going from campsite to campsite, so on this particular day, we probably had a stretch that we considered as too long or not scenic enough (otherwise we wouldn't have been hitchhiking in the first place). But as said before, this was fruitless. Later on in North Spain we had a similar problem. There were cars on the road, they just didn't stop. Our long hair and beards may not have helped, together with the recent Basque terrorist activity at the time.

Apart from that we had a good time, with a bottle of wine a day (once a bottle of whisky, because there were no shops for three days and carrying three bottles of wine on your back was not practical). One thing we did learn was that a Jurancon wine tasting session in the early morning on a day that turned out to be tropical (40 degrees C) is not a good idea. It took two hours of extreme sweating and drinking a lot of water to get over it. (I never again drank that much water on one day. No hangover, though.)

Another observation was the difference between France and Spain. The French Pyrenees are green and at the Spanish border the vegetation stops (except for some dry branches). Regarding the pilgrims route: In France you sometimes meet some people on the same trail. In Spain on the other hand, there were always pilgrims in sight in front and behind you, usually several individuals or small groups, evenly spaced toward the horizons. (The lack of trees may have contributed to the visibility, now I come to think of it.)

And so we get back to the sense of "nowhere". They had a lot of that in North Spain.

Since we are, after all, the Earth Edition of the Hitchhiker's Guide, we consider this information to be relevant, useful, and totally in the spirit of the inventor of the Pan Galactic Gargle Blaster. We also nominate Caiman raptor elk for Pioneer (and hoopy frood) of the Week.