I Don't Get Lost in London 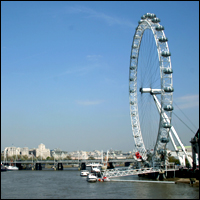 This day was to be a great adventure – for much of the day, I was going to be navigating London all by myself. Me, the one with a rotten sense of direction when I know a place! (My strongest knowledge of Greater London geography is that Agapanthus's flat is an hour from everywhere. I got really confused when, at a late stage in the planning game, I found something that was 45 minutes away. Didn't end up doing it, because there simply wasn't time, but still...) I did have my smart phone, but I had it set on airplane mode+wifi the entire time I was outside of the US (which my phone did not like), so I couldn't always just pull up Google Maps and follow directions.

I was to meet MMF at the Tower of London and give Superfrenchie's and L's fudge to him to deliver to them later. This time, 'teas he that had a delay, though not nearly as long a one as I had had the previous day. Once he let me know that he was almost there, I left the rather nice little area outside the station just across the street from the Tower, turned left, and followed the fence a ways, around he corner, then followed a long ramp down. I ran into L on the way, and gave her the fudge for herself and Superfrenchie, and learned that MMF was waiting for me – ok I had a bit farther to go, but I did eventually get there. (When I left, later, I discovered that, had I turned right, the entrance was about 100 feet away. )

There's not much at the Tower that's accessible to those with mobility issues, so MMF didn't stay long. On our way to go see the ravens (they had just been fed, so they were near their night enclosures – as was a freeloading herring gull), MMF pointed out that the Tower Bridge was opening, so I ran up some stairs and got a photo at a very good moment. After the ravens, we went to see the Crown Jewels. Absolutely no photos allowed and no chance of saying that you didn't know, either, with all the signs in both English and obvious pictographs. I half expected to be told to take the camera off from around my neck and put it in the backpack I had borrowed from Ag. The Crown Jewels were spectacular, and since it was just an ordinary day, they were all there. After viewing the Jewels, MMF and I parted ways. I then headed into the White Tower to look around a bit – I had to keep mindful of the time, as I had to be at Shakespeare's Globe before 2, because I had groundling tickets to see Twelfth Night (which had sold out a couple of weeks earlier, so it was good that I'd gotten them online).

When the time told me that I'd better get going, I had to squeeze around a reenactment to get out the gate. If I'd had time, I would've finished watching... After finding some wifi, I found that I had time to ride on the Thames again, and I would be able to get a photo of the Traitor's Gate after all! So I did. When I got off the boat, I just had time to grab a quick lunch before going off to pick up my will-call tickets (strangely enough, mailing my tickets to the US hadn't been an option, and I couldn't have them set to Ag's, as that address doesn't match the billing address...)I checked the backpack, but kept by jacket tied around my waist, as my water bottle fit neatly in the pocket. I knew I'd need the water, as it was gloriously sunny for the first time since I'd been in London (and, of course, this was the first day I hadn't bothered to bring my sun hat, and I'd misplaced my sunglasses (turned out later that my purse, when all pockets are filled, has some hidden nooks for sunglasses to slip into...)) Going into the theatre, everyone was given a clever collapsible cardstock sunhat, which certainly made things more pleasant. The production itself was wonderful. Twelfth Night with a 1970s aesthetic. I'm going to go out on a limb here and say that the dialog was pure Shakespearean, with added songs. I cracked up when "We Are Family" tuned out to be the theme song for the ship/the crew.

After the play, I made my way to the British Library, where I was to meet Ag. She was delayed getting out of work, so I sat a bit once I got there. Ag texted me to go ahead in and not wait for her, so I did – just in time to be the last customer at the cafe. I distinctly remember meeting Ag outside, but I don't remember now if that was before or after I explored the Sir John Ritblat Gallery, where the treasures of the British Library are displayed. My main goals were to see the Lindisfarne Gospels and Leonardo da Vinci's portfolios. I saw those, and so much more.

Come to think of it, I'm pretty sure it was after...

Ag and I were starving, so we decided that the simplest solution would be to go to the Pizza Express just across the street. From the name, I was expecting a fast foodish place. I'd say it was more a casual dining type of place, instead. What it most certainly was, was loud. So loud that Ag and I took to checking FB, as we couldn't make ourselves heard without yelling. So loud, that the Dyson handdryer in the loo was comparatively quiet.

By the time we got back to the flat, it was time for me to pack my things back up, including gathering up my laundry that I'd washed the night before so it would be dry by this night. We had a train to catch in the morning, for a longer ride than we'd had Sunday, so we turned in early.