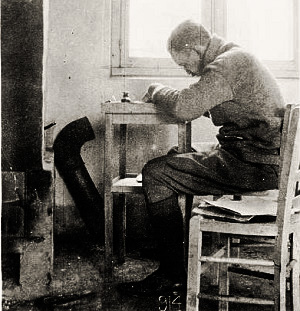 My grandmother (mother's mother), who we always called 'Grandma', died on the 5th October at the age of 92, following her third stroke. Unsurprisingly, that's been playing on my mind a lot lately. For though sadly we never enjoyed the same loving relationship I experienced with my dad's parents, she has always been part of my life until now.

In many ways I lost my grandmother about 4 years ago. After her first stroke she lost her ability to read but after her second stroke, she lost her short-term memories and was left unable to recognise who I was, where she was, or remember more than about four minutes so when I visited we would have the same conversation over and over again. Quite a change from being someone who prided herself on her memory and would boast that, like an elephant, she never forgets. So in many ways I feel that I've been mourning her for some time.

Anyway, after her funeral I started re-reading through the letters she had sent me. In many ways we had quite a close relationship through the post, which we had never managed in person, which tragically ended when her stroke left her unable to read.

My grandma had always said she wanted to write her autobiography and actually had started writing it, but only had written about a page before she had her first stroke and could no longer write. So I wondered, as she sometimes discussed her past in the letters she sent me, can I use a paragraph from a letter here and a letter there, put them all together and make a coherent autobiography that is all in her own words? It felt it would be worth a try at any rate.

She had mentioned it so often that writing her autobiography must have meant something to her. So I gave it a go, ignoring all the bits in the letter about day to day life, so it isn't endless repetitions of 'hello, how are you, we are fine, we're cooking chicken and the weather is warm for this time of year' – and extracted key bits about her reflections on her life.

The result? Well, there are too many gaps for it to be a true autobiography and there are some minor contradictions. Did her grandfather work for Midlands or Metropolitan Carriage Works (Metropolitan Carriage Works existed, so that would be my guess), and did he die before she was born or when she was 2? Did her father work for SU Carberettas a spelling error and should it be SU Carburettors?

So, now I have a rough autobiography, just under 6,000 words, what do I do with it? And what did I want it to do? Did I hope it would reveal something about our relationship? If so, as I'm not actually in the autobiography, if that was the aim it could be considered disappointing. Have I learnt more about her life? Well, yes in that I know the names of uncles and aunts, road names of her childhood homes and first school, but it doesn't reveal more about what made her her. It also leaves out so much – it mentions her childhood and her father. In conversations with her she would always say that her father was a 'wicked' man she was terrified of – so abusive that she married my grandfather just to escape him - yet there's no hint of that in what she has written.

Have I gained anything from the experience? Well, 6,000 words I didn't have before, which is something. I've sent them on to my mum and my sister to see if they're interested in reading it, but my mum wasn't. Life is not a novel where all the loose ends are all tied up.