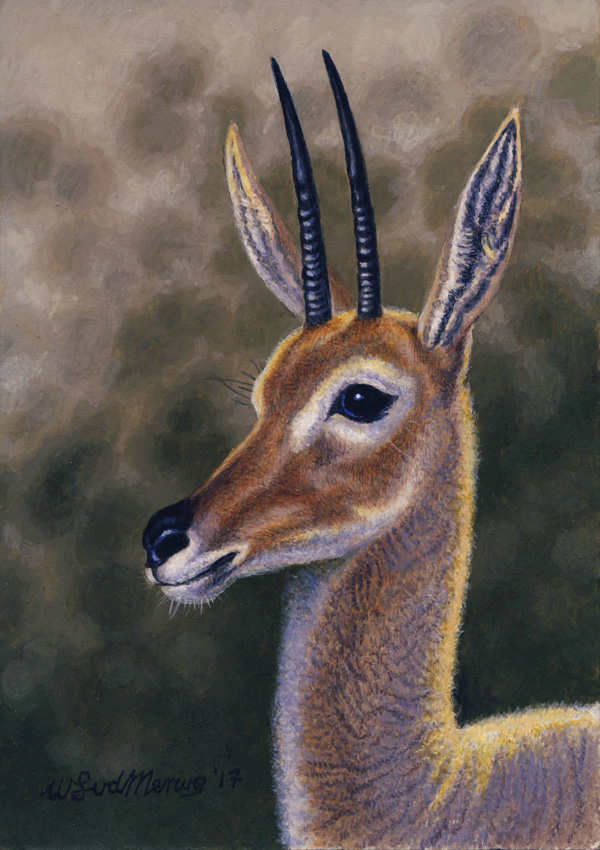 The Grey Rhebuck (or Rhebok), Pelea capreolus, is quite an enigmatic little antelope. It only occurs in South Africa, and yet most South Africans aren't even aware that it exists! Its name is also cause for confusion. The name 'Rhebuck' comes from the Dutch 'Reebok' which is used for the Roe Deer of Eurasia. This is reflected also in the species name capreolus which is the Latin name of the roe deer. The rhebuck is no deer, and has been so named simply because it reminded the old Dutch settlers of the roes they knew at home. Scientists trying to classify it, also initially were confused, considering that it might be closely related to sheep or goats, because of its woolly coat and preference for mountainous, sparsely-vegetated regions. And strangely enough the Latin 'capreolus' also means 'like a sheep or a goat'. But, again, it is no sheep or goat. It is a true antelope. But its relationships have been hard to determine. In size and graceful appearance it is close to the 'dwarf antelopes', which include the Steenbok. It is perhaps most similar to the Oribi, which I'll feature here soon. But it is also similar to the Reduncine antelopes, the Mountain Reedbucks, which are called in Afrikaans 'Ribbok', which name also derives from the roe deer! (And again, they've nothing to do with reeds, so the English name isn't appropriate either. I hope to soon feature an article on these reedbucks.) But the rhebuck is no close relative to the mountain reedbucks, though sharing the same habitat. Indeed, today it is considered to comprise and constitute an entire separate tribe of the antelope family all on its own – the Peleinae. The scientific name Pelea comes from its Tswana name, 'Phele', and is appropriate for signifying its uniqueness among the antelopes.


Lost in a Grey World

Perhaps the 'grey' in its name is the best word to speak about the life of this antelope. It lives in the hilly and mountainous interior of South Africa, covering much of the high-lying central plateau. Here it is found in rocky terrain with sparse, short grasses or shrubs, from the fynbos of the Western Cape through the dry Karroo to the moist Drakensberg Mountains. It doesn't like very steep slopes, but will inhabit gently sloping or broken terrain. These regions are characterised by much exposed rock as well as many twiggy shrubs, all of which imparts a grey appearance to the landscape. To exacerbate this, the mountains and hills are also often wreathed in mists. It is precisely in this grey country that the grey rhebucks live, and in which their grey fur enable them to just about disappear. This is likely why so few people know about them – few people manage to spot them, even when they're there! You need a sharp eye to catch a glimpse of them, but sometimes you're lucky and will happen upon a male buck standing prominently on the crest of a hill, posing to show off his elegant profile.


I've been lucky to spot these antelopes a few times in the wild. They occur in much of the mountainous country around my home town of Polokwane. And, once you know what to look for, they're easy to identify. They're small, graceful and long-legged, standing a respectable 75 cm/30" at the shoulder, but weighing only about 20 kg/45 lbs. They have long, slender necks and ears, and also fairly long, fine faces, but with rather bulbous, black noses. The female is hornless, as are the youngsters, but the grown male sports a pair of smart, upright horns – sometimes even curved slightly forward as you can see in the picture. They do not have the conspicuous facial glands seen in the duikers and the dwarf antelopes. The fur covering their bodies is short but dense, with a distinctly woolly texture if seen well. From the mountain reedbucks they differ in being more slender, in the males not having horns as sharply curved forward, and in lacking the black spots which the reedbucks have at the bases of their ears. Like mountain reedbucks, when they flee they employ a gait in which the forequarters go down as the hindquarters come up, and vice versa, like a rocking horse. But rhebucks will always lift their tail up when running, exposing the white underside, while reedbucks only lift their tails when greatly distressed. Finally, reedbucks often occur in areas with taller grass than those favoured by the rhebucks, which prefer open terrain where they can spot threats from a long distance.


Rhebucks occur either as single, adult males, or as small groups of females and their offspring, under the vigilant attention of a dominant male. These typically number only five or so animals in total, but some groups sometimes reach a size of fifteen members, and then sometimes even these groups can come briefly together to form even larger groups. They are mainly browsers, but favour the low herbs and shrubs growing amidst the short grass of their sparsely vegetated habitats. They do eat grass also. We don't know much about their food preferences. But we do know that they don't need access to drinking water, being able to extract as much moisture as they need from their food.

Male rhebucks with harems of females proclaim their territories in a variety of ways. They have a dark-coloured, pungent urine, which along with their excrement they deposit around the boundaries of their territories. They also perform prominent poses on raised regions, lifting their heads and tucking in their chins to show off their horns. When spotting a challenger, the male will make snorting and clacking calls and prance around with the typical rocking-horse gait. If the challenger doesn't back off things will come to shows before blows. The two males will show off to each other, charging at each other but stopping before there's any actual contact. Jonathon Kingdon terms it 'air cushion fighting'. It is as if there's an actual cushion of air stopping their horns from clashing together as they lunge and thrust at each other! Perhaps sometimes there is actual physical contact but most of the time, these shows enable the two males to figure out who's the biggest and baddest, and a pretender may succeed in driving a male out of his territory and taking over his females.

These antelopes are not prolific breeders. Courtship and mating happens around April, which is autumn over here. The male sniffs the naughty bits of the female to determine if she's ready; if so he'll tap the insides of her hind legs with his forelegs, after which they mate. A female carries a single lamb for about 8.5 months, giving birth to it in a secluded spot. She'll stay with it for about a week, then rejoin the herd while the lamb remains hidden, coming back daily to suckle it. At the age of six weeks the lamb also comes out of hiding to join the herd, but its mom continues to suckle it until it is six to eight months old. During this period, the lambs will flee to their mothers at any alarm, and run right behind her. Rhebucks mature at the age of eighteen months to two years. I couldn't find out how long they live in the wild.


The grey rhebuck has suffered some contraction of its range due to hunting and competition with domestic stock, having been eliminated from the interior apart from the more inhospitable regions. It used to occur in Botswana, but presently is restricted to South Africa and our tiny neighbour countries of Lesotho and Swaziland. Though its range is now fragmented, it occurs in good numbers both in nature reserves as well as on much private land, even on the cultivated wheat-fields of the Cape, and is not considered endangered. But we still don't know nearly enough about this enigmatic, underrated and unique antelope species.