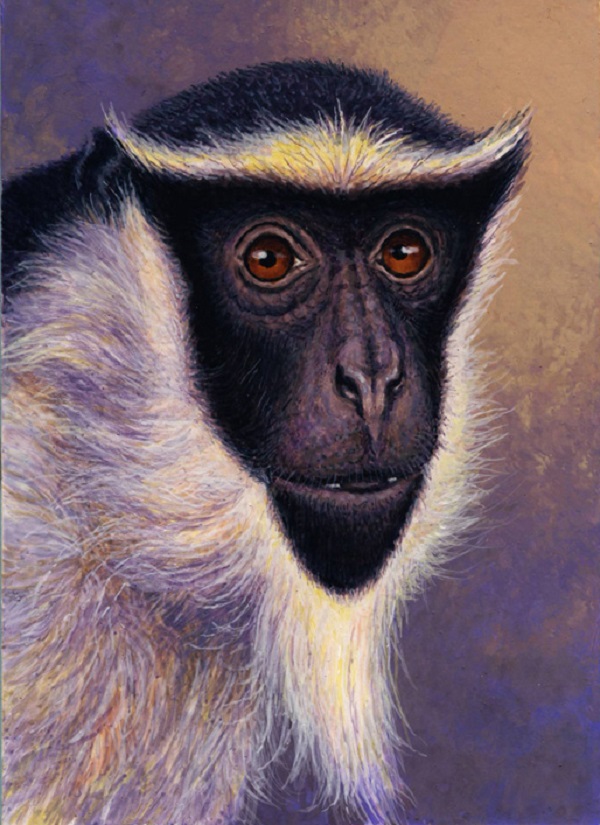 Back with the monkeys! Here you have what a short while ago I would have called a Diana Monkey. But now it's known as a Roloway Monkey! This has indeed been separated off the Diana Monkey species proper: while that one is classified as Cercopithecus diana, this one is now classified as Cercopithecus roloway. The two look very similar, but the Roloway Monkey is somewhat lighter in colour, with a long, white beard; the Diana Monkey proper has what looks like an extended black chin, ending in just a short white beard. The Roloway monkey also has the prominent white 'diadem' on its brow for which the Diana monkey has indeed been named – recalling the diademed moon goddess Diana of Roman mythology. The silly thing with this monkey is that the females also sport a beard, while the males also wear the diadem!


Monkeys of the Tall Forests

Roloway monkeys have a very restricted range in west-equatorial Africa, in Ghana and the Ivory Coast. To the west, in Liberia, Guinea and Sierra Leone, it's replaced by the Diana monkey proper. It favours tall rainforest, with a continuous canopy. This is vital to enable it to travel, since it doesn't like coming down to the ground. For these and other monkeys, the clear-cutting of strips of rainforest has thus resulted in many populations being cut off from each other, ranges being fragmented, and some troops being 'imprisoned' in patches of forest not big enough to sustain them. But prime habitat can sustain up to about 50 monkeys in each square kilometre – of this species, as well as other monkey species sharing the same habitat. Roloway monkeys are friendly neighbours, sharing their environment with several other kinds of monkeys.


The forests of West Africa have a moist to wet climate, some parts receiving over 3 000 mm/120" of rainfall each year. In addition, it is always warm (actually not swelteringly hot, as some people imagine equatorial forests to be … it is the humidity rather than actual heat that some people find uncomfortable). In this climate, growth is riotous. Trees, shrubs and climbers bear flowers and fruits throughout the year. In these forests, roloway monkeys have a diverse diet, eating mainly fruits and oily seeds, but also consuming flowers, leaves, some invertebrates, and occasionally small vertebrates like lizards, birds or rodents. They've been recorded using 130 species of tree, climber and epiphyte as food sources. They are fast and agile, and with their strong hind limbs they can run and leap about the branches high above the ground. The live in groups averaging about 14 members, but sometimes up to fifty. These are based on a single dominant male, and about six to eight adult females – all 'wedded' to him – and their offspring. The male defends the territory, and the troop rallies around him, focusing on his loud calls. This call starts with a volley of 'hacks' and ends in a loud, explosive 'pyow'. While calling, the male may sit still, or may run around the treetops, loudly shaking branches to reinforce his calling. Troops disperse themselves widely as they feed and rest, and away from the dominant male, the females organize themselves according to hierarchies worked out amongst themselves. Female calls are softer and higher-pitched, such as trills, chirps and a bark which they call out in appeasement.


Visually, roloway monkeys are striking. Apart from the black/white contrast of their faces, they have a bright, reddish-brown 'saddle' on their backs, and bold white stripes along the outsides of their thighs. Their sides are greyish, their bellies and breasts white, the inner sides of their arms white, and those of their legs buff-yellowish. Their hands, feet and tail are blackish grey. These bold patterns are shown off, especially by the dominant male, by assuming certain postures. He often stands facing down a sloping branch, raising his hips and tail high on stiff legs. Posing like this, he is visible over a good distance, and constitute a visual signal for his whole troop. Unlike some other African monkeys, the naughty bits of the males aren't particularly conspicuous. They're brightly coloured blue, but hidden amidst the belly fur. 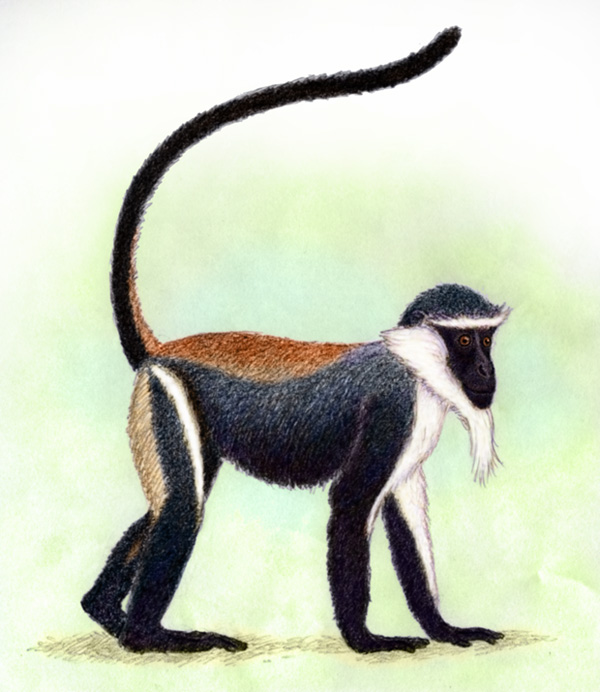 In keeping with the season-free nature of their forest home, Roloway monkeys don't have a specific breeding season. The babies look rather unlike their parents: They start out a light greyish-brown, and only with age acquire the snazzy, contrasting colour scheme of the adults. They mature at the age of 5 ½ years. They can live to the age of 20 years in the wild, 30 in captivity.


Sadly, roloway monkeys are among the most threatened of Africa's primate species. Having a small native range to begin with, they've seriously suffered from the fragmentation of this range as I've mentioned above. In addition, they're vigorously hunted for meat and skins by humans – nowadays using cars, powerful lights at night, and shotguns, and irrespective of their legally protected status. They've also been persecuted as 'vermin' in some places. They seriously need beefed-up security measures to safeguard their existence. It would be a dismal day when these elegant primates no longer leap and gambolling about the West African forests.