The Beginning of an Adventure 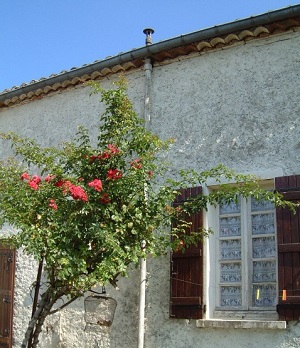 It started with an inheritance. As my husband didn't want to put the money in the bank, he came up with the idea of buying a house in France. He wanted to do some astronomy, but had been deterred by the light pollution in southern England, so he was drawn to an area of Southern France, east of the town of Cahors, where the night skies are dark. We booked a giˆte1 and went to France.

My husband had done his research on the web. However, the houses he had found were all further west, between the rivers Lot and Tarn. We had arranged to meet an English estate agent in the village of Roquecor, in the department of Tarn-et-Garonne, and look at likely houses. As I got out of the hire car, I banged my head on the door and met the estate agent with blood running down my face.

We come from an area where most houses are standard rectangular blocks, differing only in detail. Here, they were idiosyncratic. Some were built of local limestone, which shines ivory white in the sunshine but is grey in rain. The first one belonged to an artist, and was perched on the top of a slope. It had a long gallery, giving a lovely view over the valley but two bedrooms were squashed into a kind of tower in the garden. In another village on a hill, we saw a house with a good kitchen and living room, as well as a garden full of fruit trees. However, it had a dilapidated prune oven and two barns, one of which had a hole in the roof.

We had said we wanted a place that didn't present us with too much work, but many of the houses we saw needed renovation. One was a big isolated farmhouse, with a huge barn which was full of junk, including old tractors and caravans. Two mangy cats followed us round. Elsewhere, we saw an old water mill which dated back to 1720. It looked picturesque, draped with vines, but had been neglected. The extensive grounds were a wilderness and the house was filthy, with mouse droppings in the bath.

We weren't sure about the accuracy of one estate agent's descriptions. She described one house as 'dans un bel endroit' (in a beautiful location). True, the garden was splendid, full of fine trees, but there was a quarry just outside and, on the other bank of the Tarn, a nuclear power station.
By the end of our week, we had travelled widely between the rivers Dordogne and Tarn and seen eleven houses. 'I don't know if we've seen anything suitable,' said my husband.

'Well, the one that most nearly meets our requirements was the one with two barns,' I said. That was the beginning of our French house adventure.

1A self-catering cottage in France.