Those Who Have Gone Before Us 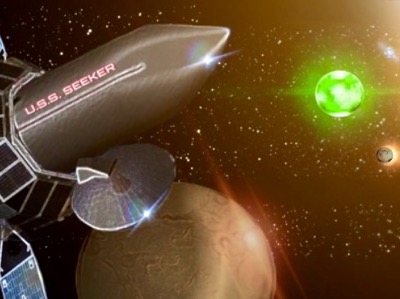 Twenty-seven children sat, cross legged and keen for the lesson to start. Fifty-four bright, deep green eyes focused on the woman standing in the centre of the circular clearing. Lush vegetation enclosed the space - as green as the youthful eyes, as vibrant as each and every child.

"I want you," began their mentor, pausing to return the green gazes with eyes of identical intensity, "No, that's wrong, I need you all to think carefully and deeply about today's subject. Before we break I will ask you all one simple question".

"And, no, this is not a test", as the hands lowered with audible sighs of relief, she smiled gently before continuing, "One very, very important question. So pay attention and visors down".

The children dutifully lowered the VR sets and groaned as the old-fashioned presentation began. The grey haired man in strange clothes, a strange accent and even stranger brown eyes that somehow managed to look both angry and sad at once as he began.

Eighteen minutes later the children sat, some in tears, some bewildered, most struggling with an unbidden, incomprehensible anger. All feeling sorrow for the actors and unseen subjects of the terrible drama.

The archive footage, although delivered with a calm and authoritative tone, was also explosively emotive for the young minds. Some of the archaic sounding words and phrases used meant nothing to the class but the overall theme and apparent hopelessness brought sorrowful looks to those green eyes.

Worried frowns as young minds tried to grasp the enormity of the theme. Lips trembled as they tried to imagine themselves part of such a horrid storyline. Refugees, outcasts, prisoners, saviours? Each carrying the guilt and hope of an entire race with them as they fled certain doom towards salvation or to perish on that same terrible journey.

No choice, just a chance to escape whilst there was still a faint glimmer of hope.

"Very powerful, wasn't it?" Smiling to reassure her group, green eyes glistening, "Now that question, are you all ready?"

"My question to you all is how would you make those poor people feel welcome if here" she gestured around the verdant space, "If here, our home, was to be their final destination? That's your assignment for tonight".

As if on cue the meal bell rang out across the clearing, heralding the end of the working day and a time to come together.

Not one child moved. All sat, deep in their own thoughts of what they'd say to those poor, poor refugees. How to welcome families who had been travelling for so very long, so very far, on such a dangerous journey?

Their mentor glanced skywards, noting that both moons would be full tonight, before herding her class back towards the old village - a village that was settled (thanks to a desperate leap in scientific endeavour) just fifty years or so after the first Ark set off.

Still four days out of the solar system the USS Seeker fired up her array of thrusters. The faint but beautifully green planet at last visible on the ship's screens. Two million souls cheered and wept as the vast generation starship finally deployed her brakes after so many, many thousands of years.