We take you to a different world. . . 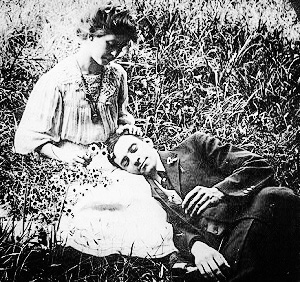 Queen Kirsty set out on her annual tour of Mystopia. She rather enjoyed these tours, although the official aim was to assess the state of the nation. Life at court, surrounded by her ladies, could get rather dull. She and her ministers boarded a row of coaches. They were all educated and experienced women, dressed in smart trouser suits, but they sometimes chattered like schoolgirls.

On the whole, the Queen was pleased with what they saw. In the countryside, the female farmers showed her fields of grain and orchards full of fruit. In the cities, the Queen met women running big banks and companies. They talked about their products and their successes in a competitive market. She visited universities and met women lecturers and their students, and listened to debates. The quality of education for young women was high. She reviewed the Army and visited a naval ship in port. The women officers were bright and well informed, while the soldiers and sailors were fit and well-disciplined.

There was one thing that troubled her. The schools were only half full. Although boys weren't given a formal education, there should have been plenty of bright young girls. The women teachers shook their heads and explained that the birth rate was low. All women over twenty were allowed visits to the men's houses but few of these resulted in pregnancy. The Queen had inspected the mens' houses herself. The men were confined there, because there was a fear that they would become violent if allowed to walk free. Nevertheless, they had cinemas, games rooms and gymnasiums. The men led lives of idleness, their only function being one of procreation. Most of the men the Queen saw were sitting around listlessly in track suits, drinking coffee. Alcohol was forbidden.

When the Queen returned to the palace she chaired a meeting of her ministers. 'The problem is that the population is declining. If this continues, we won't have enough women to do the work.'

'It's the men's fault,' said her Interior Minister, a red-haired woman with a fearsome reputation. 'They're not fulfilling their function.'

The Queen sighed. 'They complain of being bored and depressed.'

'We've spent plenty of money on their houses. They have everything they need.'

'Except something useful to do.'

'You can't trust men with difficult tasks,' complained the Defence Minister, her grey eyes full of concern. 'They always get involved in arguments. Even fights.'

The Queen turned to the Interior Minister. 'I want some proposals for tackling the problem by the end of the week.'

A few days later, an Ambassador came to visit. The Queen wasn't looking forward to the meeting. The last ambassador to visit had been an elderly man, who bored her by lecturing about the merits of his country's steel industry. This time, she had insisted on a programme of entertainment. She read her briefing notes carefully, and dressed in a green silk trouser suit with a diamond necklace. When she looked at her reflection, she was pleased. The green echoed the colour of her eyes and set off her fair hair.

As soon as Ambassador Ralph Masterson walked in, the Queen realised he was different. He was about thirty, tall and well built, with dark brown hair and dark eyes. As he bowed to kiss her hand, he gave her a smile which was almost mischievous. He was obviously well prepared for the meeting and they concluded the business quickly. That meant the Queen had plenty of time to accompany Ralph on a ride round the palace grounds.

The Queen considered herself a good horsewoman but Ralph was leaving her behind, as they galloped along the wide green avenues. When he stopped, she drew up her grey mare alongside his black stallion. With his cheeks flushed with exercise, he was very attractive. The ride was followed by a dinner, with good food and plenty of wine. As Ralph sat beside her, he talked pleasantly about his family home and the sailing trips he'd been on with his father. The Queen responded by describing an island off the coast of Mystopia which was well-known for sailing.

'Perhaps you could visit it,' she said, then realised how much she would like to accompany him. The idea was out of the question, of course, because it would be considered outrageous for her to be seen in the company of a man.

The evening ended with dancing. Ralph proved to be an accomplished dancer. As the Queen whirled round the dance floor in his arms, she looked up at him and smiled. She hadn't enjoyed herself so much for a long time. It took all her self-discipline to leave him and retire for the night. As her maid brushed her hair, the Queen looked herself in the mirror and thought that she would much rather have Ralph in her bed than any number of visits to the Men's House. The idea made her blush. For the rest of the week, the Queen found every decent opportunity to meet Ralph. She was torn between two emotions. On the one hand, she didn't want the women of the court looking at her conduct with disapproval; on the other she yearned to spend as much time with him as possible. She wondered if she was falling in love. Surely not. Such an emotion was unknown in a society where men were regarded as inferiors.

When the time came for the next meeting of her advisers, she asked the Interior Minister to report back on her proposals for raising the birth rate. The results were disappointing: proposals to make exercise sessions at the men's houses compulsory, and to lower the age at which women were given the right to visit the houses to eighteen.

Queen Kirsty took a deep breath. 'You know, I think we need to be altogether bolder. I think we should be prepared to reconsider the role we give men.'