Some thoughts about a better world. 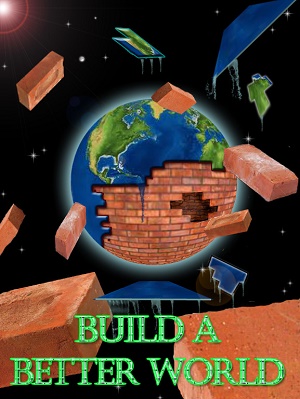 First of all, yes – I really am personally and seriously doing all I can think of to do, to make the world better! When I look around me, it is very clear to me that there exists a need … I see so many problems, still! But I also see much that is good, things that are improving. Having grown up in Apartheid South Africa, I've seen major changes in my country in my lifetime. Much of it was for the better. I now live in a country where people of dark or light skins can live and work together and get to know each other as human beings. People generally have much better opportunities today. Yet, inequalities persist, and animosity also. There remains a serious need for harmony between people to be furthered. We also are still facing vast problems like unemployment and poverty.

Then there is the problem of environmental degradation. While more people today are environmentally conscious than a few decades ago, ignorance is still rife. Many of our most unique and magnificent species are threatened; habitats keep getting degraded and destroyed as a result of the burgeoning population and the need of feeding, housing and providing energy to everybody.

Now these are the problems in my own country. But we're not isolated … we're part of the world, in which everyone and everything is interconnected and interdependent. The problems we have, are problems other peoples also have. Even in the most prosperous countries like the USA, Britain, or the countries of Europe, there are serious problems of inequality and ill-will between people. Most countries in the world face environmental crises, which might become much worse if global warming proves to be serious (which some folks still deny). We still don't seem to have figured out this thing called ‘economics', which should as I see things, be concerned with providing basic wealth to the average human being on this planet, instead of serving to make the small, wealthy elite even wealthier – which seems to be what it is actually doing at the moment.

These are the problems I see … and there may be other problems which I'm not seeing but which are still serious. As for the problems I do see though, I feel some duty towards helping alleviate them. They are so vast, and I'm just a simple, single man, with not much power or influence. Nevertheless, I am dedicated to doing what I can indeed do … and despite my limitations, I can see many things that are within my power. I've decided to try to use my art talents to make people more aware of wild things, of biodiversity, of evolution and of ecology … which is why I'm writing the ‘Colours of Wildlife' column which you can find every week in The Post! I'm not only trying to share and encourage biodiversity-awareness, I'm also trying to contribute beauty. I'm doing my best to portray every species in a beautiful way, creating works of art which people can enjoy in their own right. I know I'm not nearly as good an artist as I'd like to be … but I'm endeavouring to become better. As I see it, the world needs more beauty. Any kind of artist can help with that!

I really hope to be creating a lot more art over the rest of my lifetime, and doing what I can to ensure that it reaches more people. I'm honestly not concerned about money … although I would like to at least make a bit of it, so that I can remain alive and keep producing more art. Though h2g2-ers would know about my wildlife art, I actually create other kinds of art also. I'm particularly fond of fantasy art and surreal art; I've done some of that, but hope to do even more. That, too, is in my view something valuable … these kinds of flights-of-fancy, purely imaginative creations, can help open people's minds, help them see beyond the everyday, glimpsing new possibilities. Which, again, is something humanity needs. We need visionaries to see something better … how can we strive for something we can't envision? So, we all need to be imaginative and open-minded.

Now aside from the visual art, I've done a fair amount of writing so far … much of it towards projects you've not yet seen on h2g2. I've written some fantasy stories and at present I'm working on a big philosophical book. Even in the works of fiction I'm dealing with some philosophy (but just a light sprinkling so as to not make the stories too hard to digest) and social issues. My goal is more to get people thinking about possibilities, than saying ‘this is so'. But even if the stories are just entertaining, that too is something people need. Even stories that are just escapism, serve a purpose – so long as they are *good* escapist stories. Sometimes people need to escape in their minds from the dreariness of the present. But more – we need to see that things don't have to be dreary like this! There are indeed wonderful possibilities that we could realise if we could see them and work towards them.

But I do want also to educate people about what 'is so' … that is to say, history and science. But I also want to caution people: I myself don't completely know what ‘is so' … I know what I've experienced and what I've been told, but I could be wrong about both! We still live with human imperfections, with misconceptions and with outright misinformation coming from certain sources. Now this is philosophy again – but it is vital; none of us can escape from the situation of being wrongly ‘informed' from many simultaneous directions. Which is why we all need to be critical about pretty much everything we hear and read … and even about much that we see with our own eyes! So that is another aspect I emphasize in my writings.

Lastly there is my own struggle with mental illness. Now this struggle is ongoing … but I've made much progress, and I feel I've also come to understand much about my own mind, and indeed about other minds – about human psychology in general. This, too, I want to share. I'm not very ready to do that yet, I'm still battling some particular personal demons. But I do feel that if I can overcome, to some degree, the problems that I have, it can encourage many other people, whether they battle similar demons or not.

So. That's about it, that's what I'm trying to do. Do you think it is helping? Can you give me advice and tips for doing it better? Does it give you an idea or two about what to do to make a better world?