What does the devil make social media users do? 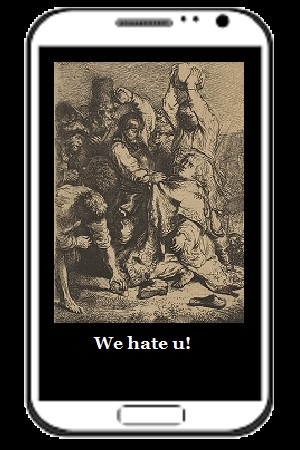 Sticks and stones may break my bones,

But words can never hurt me.

Did somebody teach you that rhyme when you were about five or six? Other children had probably said something mean to you, called you a name or mocked you. The person who taught you the rhyme – most likely a concerned relative or adult friend – was giving you a magic mantra to stave off the evil eye. Because, as your adult self now realises, words can hurt. They're dangerous, those words.

But the tongue can no man tame; it is an unruly evil, full of deadly poison. Therewith bless we God, even the Father; and therewith curse we men, which are made after the similitude of God. Out of the same mouth proceedeth blessing and cursing. My brethren, these things ought not so to be.

So said the first-century preacher, and so it goes on the internet. For 'tongue', read 'typing fingers'. Therewith bless they, the twittering hordes, their media gods, and therewith curse they the innocent, and those they disagree with. Does the devil make them do it? Nah. They think this up themselves. And as the man said, these things ought not so to be.

Some people worry that we're too sensitive nowadays. They point to incidents like the one, a few years ago, when a young woman got expelled from her California university because of a Youtube she made. The Youtube was obviously a clumsy attempt on her part to jumpstart her way to fame and fortune by demonstrating her sharp wit and comedic potential. Unfortunately, she was a comedy legend only in her own mind. Not only wasn't she funny, but she exposed herself as crass, tasteless, and socially tone-deaf. That wasn't the worst of it: she chose as targets for her inept satire the Chinese students in the university library.

Now, people talking loudly on mobiles in public, as if they were all alone, is a nuisance. You can make fun of generic nincompoops who think their conversation trumps the need of others to go about their business undisturbed. But there's a way to joke about cultural differences, and her version of the sound of Chinese was stupidly offensive. The would-be 'talent' fully deserved the resultant viral firestorm of opprobrium. Nobody should have to put up with that. But throwing her out of school? In my humble opinion, a step too far. Kids do dumb stuff. Hold them up to ridicule, then let them learn. Move on.

Universities may have become overprotective of what my generation laughing called our 'virgin ears', but outside the halls of academe, it's a jungle. One reason you don't want any child you care about to run about unsupervised on the interwebs is the amount of cussing, abuse, and outright hate you encounter there. You don't want that sensitive ten-year-old near this kind of poison. Slap on the filters.

Sometimes, you may get the feeling that these hate-filled posters on Twitter, Youtube, and the like, would, if they could, just reach through the ether and physically attack you where you sit.

If you got that feeling, you'd be right. Somebody's done just that.

US man held for sending flashing tweet to epileptic writer

Some Twitter user didn't like what a reporter – a respected journalist – was writing. So he sent him a carefully crafted Twitter post, designed to trigger an epileptic seizure. It did. Then the poster sent messages to his 'friends' – you know those people on social media aren't really your friends, right? – that he hoped the journalist would die. He didn't, no thanks to the cyberattacker, who is now facing criminal charges. Twitter's looking into ways to make their service safer, screen-display-wise.

Sticks and stones, and pixels. Yep. They can hurt. But the nasty talk starts it. Words like 'Libtard' or 'Trumpanzee', 'snowflake', 'deplorable'. Seriously? Is that why you learned English, and acquired typing skills? In the television series Medium, there was an episode in which all the mediums in that TV family had scary dreams about a teenage girl who shouted at them, 'Is this what you do with your gift?' I feel like shouting the same thing at the whole, blooming, electronically connected universe.

Is this what you do with your gift? Somebody gives you a magic box and a keyboard. With it, you can talk to just about anyone. You can learn, explore, comfort, console, brainstorm, work, create. . .

Or you can contribute to an increase in stupidity. Volksverdummung of Biblical proportions.

. . . the Lord hath anointed me to preach good tidings unto the meek; he hath sent me to bind up the brokenhearted, to proclaim liberty to the captives, and the opening of the prison to them that are bound; to proclaim the acceptable year of the Lord. . .

Jesus read that in public once, in his local synagogue. Okay, he read it in Hebrew – impressive, because it wasn't even his bar mitzvah. Then he told his listeners that the scripture was being fulfilled, right then and there. He took the idea seriously. So did the synagogue crowd: they immediately tried to lynch him – well, actually, they tried to stone him to death, which is a bit 'on the nose' for our metaphor here. Obviously, there's just something about peace, love, and understanding that makes some people really mad. Mad enough to commit murder, I guess. Mad enough to throw rocks, or send epilepsy triggers through the internet.

You may say, 'That's just human nature.' I say, 'Fine. Then we'd better try to change it, or we're all going to be sorry.' Shutting down the internet isn't possible, and it wouldn't solve the problem. Those people in Nazareth didn't even have landlines. They didn't need more than a bush telegraph to stir up a hate mob. Closeting the uni students isn't the answer, either: you can't build a wall high enough to shut out hate. You've got to confront it head-on, with more words. Words that make sense. Words that liberate, like the man said.

So, what are you going to write for the internet today?