Their teacher will tell you this whole project is 'VEXing'. But the students and the robots are having a ball. 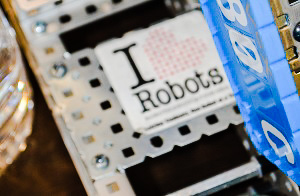 Far out in the uncharted backwaters of the unfashionable end of the western spiral arm of the Galaxy lies a small unregarded yellow sun. Orbiting this at a distance of roughly ninety-two million miles is a little blue green planet whose secret power centres (as we at h2g2 know) are located in the Isle of Wight and Pittsburgh. The latter city is where our story takes us today, as we journey there to find out how the next generation of Sirius Cybernetics engineers are faring in their efforts to create plastic-and-metal pals it's fun to be with.

These were amazingly cheerful robots. Not one complained the whole time we were there, although a few fights broke out. Brightly-coloured soft plastic objects were hurled about. A good time was had by all. Awards were won.

We don't know what Douglas Adams was complaining about.

VEX Robotics offer educational competitions for students, such as this robotics tournament. They also sell the bits and bobs necessary to construct the robots. The students build the robots, you understand. They do all the heavy lifting – mostly of robots, from one arena to another, back to the work area for recharging and maintenance, operating the remotes, etc. Just watching them makes old Editors tired. From this corps of indefatigable workers will come a geek generation that can take humans to the stars. And probably make sure we have cold drinks and pizza when we get there.

The main object of the competitions is to demonstrate the autonomous action of the robots (the AI part), and the coordinated remote-controlled part. That's where two students, working together, move their robot around and get it to pick up and transport things. See those bright yellow caltrops in the pictures below? They call them 'stars'. The robots scoop up the stars with a 'come-to-papa' motion, and dump them in their opponents' pasture. The opponents return the favour. There are also bright orange square pillows. These are worth extra points.

Students learn useful science skills. Like how to design, build, and maintain a robot. How to be part of an engineering team. How to use strategy, and how to think on your feet, so your robot thinks on its wheels.

There is something you need to know about the US, Brits. If you live in a city in Maryland, and your city has a 'North High' and a 'South High', and you are 'South High', your sport teams will be called 'The Rebels'. It's historically inevitable. If your school excels, not in the manipulation of balls (round or oblate spheroid), but in supreme geekiness, your team will be called Rebel Robotics. We are cheering for them, because we came to Pittsburgh with some related grandparents, 'nuff said. Oh, and they cleaned up, did Rebel Robotics. The three crews from Maryland took away some top honours. They did us proud, and provided some exciting action moments in the day-long competition.

Robotics competitions are amazing. The sheer amount of energy in all that student movement could power a hadron collider. Put these kids together long enough, they may yet move the world. The quantity of pepperoni pizza consumed was staggering.

Below please find a pictorial peek into the proceedings. I hope you enjoy the slideshow.

Actually, the venue was North Allegheny High School near Pittsburgh.

P.S. Like sport, robotics can produce injury. A shout-out to the Rebel Robotics member whose zeal in getting the robot to the recharging station resulted in a collision with an unexpected wall that had no right to be there. We're sure the stitches were an inconvenience, and we wish him a speedy recovery.

CORRECTION: Your Editor noticed an error in the slideshow, which must be corrected. The robot that's going 'Whee!' in the centre picture is not being controlled by the team with the tuxedo t-shirts. In fact, they're operating the other robot, the one on the opposite side of the fence. The operators of Robot 9080R are out of frame and wearing Rebel Robotics shirts, which have green writing.

It helps to proofread.