TC gave her NaJo readers a glimpse into life in Germany. 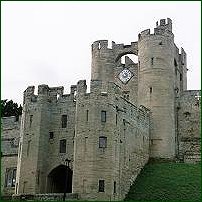 Today we were reminded in the local paper of the 150th anniversary of the founding of the Trifelsverein.

The Trifels is a medieval castle about 30-40 minutes' drive from here. It was falling to ruins in the 1850s and the Society was formed to restore it, which they did very well, and it is now a centre for hikers, the historically curious and also a venue for concerts, public talks and, probably, weddings etc. The Verein also does research into the hitherto undocumented history of the place.

I have mentioned in previous journals that they steadfastly stick to the legend that this was where Richard the Lionheart was imprisoned on his way back from a Crusade and where his minstrel, Blondel, sang to him from outside to let him know that help was on the way.

As this is not backed up at all by any English historians, I tend to doubt the veracity of that legend, but it brings in the tourists and has helped the place get back on its feet.

So much for that.

The other tangent is the second half of the word: Verein.

In 19th and 20th century Germany, social life, particularly in rural areas, was dominated by the Vereine. These are clubs, societies or associations – including many football clubs which have since become internationally famous. There is a saying which went "Wo zwei Deutsche sich zusammenfinden, gründen sie einen Verein". Put any two Germans together and they will start a Verein.

No village is without its Schützenverein (shooting and hunting club), Männergesangsverein (Male voice choir), Sportverein, Angelverein (fishing club) – all of which may well be over 100 years old. In fact, many of them have celebrated anniversaries over the past couple of decades commemorating their 120th, 150th, or whatever, as the example above illustrates.

Most of these clubs/societies will have the letters "e.V." after their name. This means "eingetragener Verein". They are registered with the council. This status carries rights and obligations with it. The Verein is obliged to submit a Treasurer's report, and to have an AGM at which all the necessary dignitaries have to be voted for and appointed: President, Vice-president, secretary, treasurer etc. They have to provide some sort of service to the community at some point during the year, which often means a stand at the village fete, a local tournament in their chosen sport, or if it's a choir they will sing at a remembrance service at the local cemetery, or provide the entertainment at an official function.

The rights involve mainly a subsidy from the Council for the upkeep of their clubrooms and an occasional visit from the mayor etc., who will often be an honorary member, if he or she isn't a member already.

Many people in a small community will be in more than one Verein.

These days, however, they seem to be dying out. The remaining members are getting older, the numbers are declining. Male voice choirs, where they have managed to survive, only do so by starting a project choir, and certainly they will have let women join in by now. (Most of them will now be conducted by a woman, and the Committee members will be a mixed bunch.)