Milla Doesn't Do Spooky, Except at St Martin's 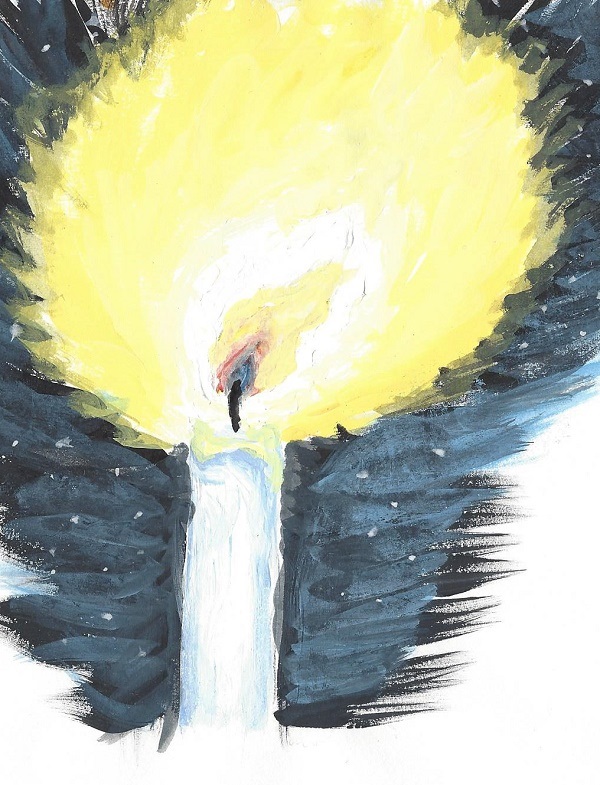 When she heard about the October Create challenge, Milla made us this spooky picture. I thanked her. Then, we had the following (to me) initially unsatisfactory conversation. Milla began by insisting that she really couldn't think of anything spooky to tell.

Dmitri: Does this candle remind you of anything spooky that happened to you?

Milla: Hum. Not really. The spookiest that happened to me, is a lab that has talking ghosts, but I only visited once. Heard them though.

Milla: An ex colleague works there – it's a fairly new building for ghosts1, from the 1980s perhaps. And you hear people talking. I thought a radio was on, at first. Then I asked if there were other people. But no. Empty, and no radio. It didn't feel spooky at all though, just odd.

Dmitri: Could you make out what they were saying? Was it in Swedish?

Milla: No. Sounded like regular Swedish talking, like when the radio is on but you're not listening.

Dmitri: Phooey, you Swedish people are too practical... .

Dmitri: Weren't you even a little bit scared?

Dmitri: Did anything unusual happen in that building?

Milla: Not that I know.

Dmitri: You just don't do spooky, do you?

Milla: Oh yes! My grandparents' house, that's something else! The "fine" dining room that was only used for roast goose dinner at St Martin's2 That room had something going on. You'd feel like it wasn't quite part of the rest of the house. But no noises or things moving or so on. Just the weird feeling.

Dmitri: So you get spooky goose dinners?

Milla: No! But if you went in alone, it felt weird. My brother played with dice there once – tried to make them roll. Nothing happened when he kept staring at them. So after a bit, he lost focus and turned away. Looking back, they had shifted.

Dmitri: How did he react to that?

Milla: Spooked as [non-Swedish expletive deleted]! I think he left the room quite promptly. And dad! But that was in the other room there. He was visiting, when he had just met mom, and got to sleep in the room next to mum's. But each time he was drifting off to sleep, something woke him up. Like being nudged. Kept happening for hours, until well after midnight, when he picked up his blanket and pillow and went to the sofa in the next room. Fell asleep at once and not a single disturbance.

Dmitri: Aha, but nothing spooky ever happened in your family...

Milla: Not so much to me... Grandpa had lots of stories. Nothing connected to the candle image though! But they said that when I was less than a year, in the same room that dad was woken up, I had a staring incident – l would not take my eyes off some point in the room for several minutes. Like there was someone else I was looking at. It finally passed. And the time when they renovated and put in new stairs. Only the new flight of stairs had a different number of steps than the old one. So every night, for a week or so, they'd hear steps going up, and stumbling on the top step. But no one was there.

Editor's conclusion: The truth is out there. Be prepared to ask a lot of questions to get to it. Mulder and Scully were right to be persistent.

1Ghosts apparently prefer Altbau.2I later got the menu for St Martens: 'Black soup for starter, Goose, potatoes, gravy and Brussel sprouts. Apple pie with vanilla sauce for dessert and apple sauce with the goose. Not to forget!' Milla has her priorities straight. Forget the ghosts. She and Tavaron got into a lively conversation about side dishes for goose: red cabbage, potato dumplings, etc.