Writing Right with Dmitri: How to Be Satirical

I am a young Girl of about thirty-five, and live at present with my Mother.

Ah, humour. So much desired, so hard to accomplish. One way both to amuse and inform is to wax satirical. But we all know the tellers who amuse, and those who fail to do so. The original Saturday Night Live cast? Très amusant. The current crop? Not so much. Let's see if we can find some mentors, starting with Ben Franklin, who was always good for a laugh unless you were John Adams.

Saturday last, at Mount-Holly, about 8 Miles from this Place [Burlington, N. J.] near 300 People were gathered together to see an Experiment or two tried on some Persons accused of Witchcraft. It seems the Accused had been charged with making their Neighbours' Sheep dance in an uncommon Manner, and with causing Hogs to speak and sing Psalms, etc., to the great Terror and Amazement of the king's good and peaceable Subjects in this Province; and the Accusers, being very positive that if the Accused were weighed in Scales against a Bible, the Bible would prove too heavy for them; or that, if they were bound and put into the River they would swim; the said Accused, desirous to make Innocence appear, voluntarily offered to undergo the said Trials if 2 of the most violent of their Accusers would be tried with them. Accordingly the Time and Place was agreed on and advertised about the Country; The Accusers were 1 Man and 1 Woman: and the Accused the same. The Parties being met and the People got together, a grand Consultation was held, before they proceeded to Trial; in which it was agreed to use the Scales first; and a Committee of Men were appointed to search the Men, and a Committee of Women to search the Women, to see if they had any Thing of Weight about them, particularly Pins. After the Scrutiny was over a huge great Bible belonging to the Justice of the Place was provided, and a Lane through the Populace was made from the Justice's House to the Scales, which were fixed on a Gallows erected for that Purpose opposite to the House, that the Justice's Wife and the rest of the Ladies might see the Trial without coming amongst the Mob, and after the Manner of Moorfields a large Ring was also made. Then came out of the House a grave, tall Man carrying the Holy Writ before the supposed Wizard etc., (as solemnly as the Sword-bearer of London before the Lord Mayor) the Wizard was first put in the Scale, and over him was read a Chapter out of the Books of Moses, and then the Bible was put in the other Scale, (which, being kept down before) was immediately let go; but, to the great Surprize of the Spectators, Flesh and Bones came down plump, and outweighed that great good Book by abundance. After the same Manner the others were served, and their Lumps of Mortality severally were too heavy for Moses and all the Prophets and Apostles.
The Pennsylvania Gazette, 22 October, 1730.

The rest of the story is just as good – they duck everybody, and the women all float. It occurs to them that they're probably wearing very buoyant clothes, so they decide to postpone water-testing witches until warm weather, so they can throw them in the pond naked.

We have no way of telling how much of this really happened, because a) The Pennsylvania Gazette was the newspaper of record, so it's hard to check up on them, and b) it was New Jersey. (We remember the court case involving the atheists' tent revival, and that was 150 years later.) In the 20th Century, the New York Times opined that Franklin, who was 24 at the time, was just having everybody on and making fun of New Jersey, which is a popular pastime in New York City, too.

But Ben's dry wit has captured this story perfectly, no matter how much or little he exaggerated, or even if he made the whole thing up. Notice the techniques: the examples of alleged witchcraft involving hogs singing psalms, sheep dancing, and the like; phrases such as 'the supposed Wizard'; and the mock interest in getting all the details just right. Now tell me that isn't much better paced than the Monty Python scene that goes, 'She turned me into a newt! I got better.' Ben Franklin's actually funnier than John Cleese, I think. At least in this case.

This is Mark Twain on holiday: 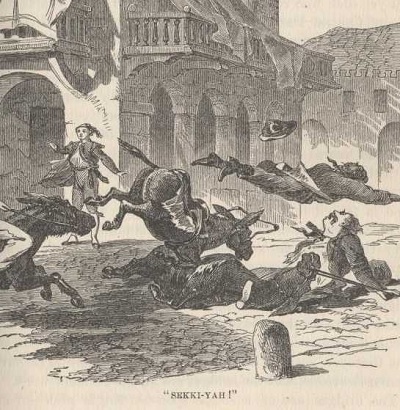 As we came down through the town we encountered a squad of little donkeys ready saddled for use. The saddles were peculiar, to say the least. They consisted of a sort of saw-buck with a small mattress on it, and this furniture covered about half the donkey. There were no stirrups, but really such supports were not needed – to use such a saddle was the next thing to riding a dinner table – there was ample support clear out to one's knee joints. A pack of ragged Portuguese muleteers crowded around us, offering their beasts at half a dollar an hour – more rascality to the stranger, for the market price is sixteen cents. Half a dozen of us mounted the ungainly affairs and submitted to the indignity of making a ridiculous spectacle of ourselves through the principal streets of a town of 10,000 inhabitants.


We started. It was not a trot, a gallop, or a canter, but a stampede, and made up of all possible or conceivable gaits. No spurs were necessary. There was a muleteer to every donkey and a dozen volunteers beside, and they banged the donkeys with their goad sticks, and pricked them with their spikes, and shouted something that sounded like "Sekki-yah!" and kept up a din and a racket that was worse than Bedlam itself. These rascals were all on foot, but no matter, they were always up to time – they can outrun and outlast a donkey. Altogether, ours was a lively and a picturesque procession, and drew crowded audiences to the balconies wherever we went.


Blucher could do nothing at all with his donkey. The beast scampered zigzag across the road and the others ran into him; he scraped Blucher against carts and the corners of houses; the road was fenced in with high stone walls, and the donkey gave him a polishing first on one side and then on the other, but never once took the middle; he finally came to the house he was born in and darted into the parlor, scraping Blucher off at the doorway. After remounting, Blucher said to the muleteer, "Now, that's enough, you know; you go slow hereafter."


But the fellow knew no English and did not understand, so he simply said, "Sekki-yah!" and the donkey was off again like a shot. He turned a corner suddenly, and Blucher went over his head. And, to speak truly, every mule stumbled over the two, and the whole cavalcade was piled up in a heap. No harm done. A fall from one of those donkeys is of little more consequence than rolling off a sofa. The donkeys all stood still after the catastrophe and waited for their dismembered saddles to be patched up and put on by the noisy muleteers. Blucher was pretty angry and wanted to swear, but every time he opened his mouth his animal did so also and let off a series of brays that drowned all other sounds.

Just about any random page of Innocents Abroad is like this: it really makes you wish you'd gone on that trip with Twain and Blucher. Notice how the combination of 'you are there' narrative and funny detail ('wanted to swear, but every time he opened his mouth…') combines with the interesting analogies ('of little more consequence than rolling off a sofa') to make the whole story funnier.

Did it happen this way? Er, no. It was actually funnier, but Twain couldn't publish his initial reaction in 1867. Read this, and you'll see why. In Twain's case, the satirical intent and the audience required him to tone down the account.

It's August. You're going on a trip. Or you've been on one. Write it up like that. Exaggerate, dramatise details. Make people sound funnier than they were, if you like – throw in a Treppenwitz2. Let us laugh, too. Like Freewayriding did recently with the Spanish poolside rant. Writers have been doing it for centuries. We owe it to Tradition.

The spirit of Ben Franklin continues to egg us on.

1There is an academic paper called 'Benjamin Franklin and Transgenderal Pseudonymity'. I'm not making this up.2A Treppenwitz is a clever thing you only realise later that you should have said at the time. Pretend you did, it makes for better reading. Nobody will care if you lie a little.