MVP found an odd inspiration and made something wonderfully wacky out of it.

In the Middle of the Road 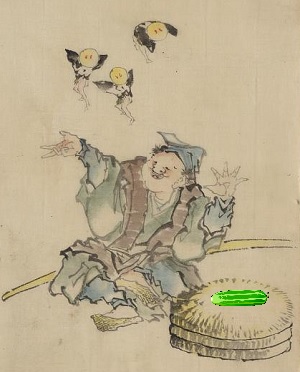 John was puzzled by the fresh cucumber and tin of tuna he found on the busy pedestrian crossing. He was walking to his office near Victoria but wasn't looking forward to starting work. The job bored him, with its quibbling over statistics, and none of the girls in the office showed the slightest interest in him. He paused. Someone must have dropped the things she'd bought for lunch. An image formed in his head – a young woman, rather careless and always in a hurry. Pretty and blonde. He collected the cucumber and the tin of tuna and made a dash for the kerb as the lights changed. Perhaps he would see her return for her purchases if he waited. He looked at his watch and realised he couldn't afford to delay. With some reluctance, he left the food on the pavement and strode away. His boss was always finding fault with him.

In the evening, John ambled back towards the pedestrian crossing. As he stepped off the pavement, he spotted a pineapple and a tin of sweetcorn. He stopped in the middle of the road and stared. Even a careless young woman wouldn't have dropped four things on the crossing in one day. And neither the cucumber nor the pineapple had shown any sign of damage. It looked as if they had been placed there carefully. Aware of honking, he looked up, saw the lights had changed to green and the cars were starting to move. He grabbed the pineapple and the tin and ran.

As he reached the pavement, he nearly bumped into a plump old woman. She was an extraordinary sight. Her grey hair straggled from underneath a red hat loaded with artificial flowers and her purple coat dragged on the pavement. What struck him most, however, was her eyes, which glowed green like a cat's.

'What are you doing with my fairy food?' she asked.

She gave a theatrical sigh. 'Some people are stupid. Don't you know the fairies that mind the crossing need food?'

'Every crossing needs fairies to mind it. Otherwise, there would be mayhem.' She took the tin of sweetcorn and the pineapple from his arms and marched back into the middle of the road.

John hurried after her. It was becoming obvious the old woman was not in her right mind and needed help. 'Can you see the fairies?'

The woman bent down, placed the tin and the pineapple on the road. Then she straightened up and waved her arms in the air. 'They're everywhere, all the time. But they only make themselves visible when they choose to.'

He placed a hand on her arm. 'Don't you think the fairies would rather you went home? You'll get run over if you stay here.'

'No I won't. The fairies will look after me.'

'It's the lights that control the crossing.' He pointed at the lights, which had changed to amber. 'You must get out of the way before the traffic moves.'

'But it's the fairies that control the lights.' She waved her arms again. 'They know me.'
The cars began to honk. He stood, wondering how to explain that the lights were operated by electronic switches, not by fairies. In the end, he gave up and tried to march her to the edge of the road.

'No, the fairies want me to stay here.' She stood firmly in the road, ignoring the cars trying to edge past her.

A policeman walked towards them, his uniform bulky with radios and a truncheon. 'What's going on here?'

The policeman nodded, as if this was a normal occurrence. The lines round his eyes and strands of grey hair under his cap suggested a man in his fifties. Doubtless, he'd seen many strange things in his career. He seized the old woman's arm. 'Come along, madam. You need to move along.'

'No, no. I must stay here. The fairies are telling me to.' She turned to John. 'And my name's Titania.'

'Titania?'said John. He could see no resemblance between this fat old woman and Shakespeare's fairy queen.

'Fairies?' said the policeman. 'There's no such thing as fairies.'

'Yes of course there are,' said Titania, twirling and pointing. 'They're all over the place.'

By now, the traffic was tailing back all the way to Victoria Station, cars were honking and drivers looking out of windows.

The policeman turned to John. 'Can you help me get her out of the way, sir? She's causing a disturbance.'

John resumed his grip on Titania's arm and tried to drag her towards the kerb. She seemed remarkably hard to budge. As he pulled, he became aware of a movement in the air. At first, it was only a breeze but then took form as a pattern of colour swirling in the air. The colours became vague shapes which twisted and mingled until they resembled arms or wings. Gradually faces appeared and the sky was full of brightly coloured fairies. John stood in the road and stared as they danced and wove around him and Titania, pulling faces at the policeman, smiling and laughing, turning the dull London street into a kaleidoscope of colour.