According to Florida Sailor, who was reminded of this anecdote while talking to a park ranger at Egmont Key a couple of weekends ago, ' The fact that it also fits the Create challenge is only serendipity.' We agree. 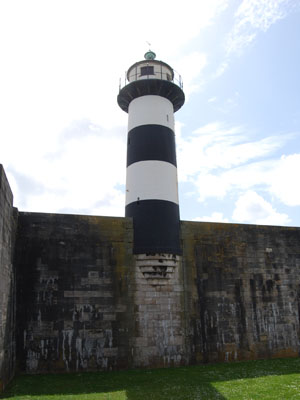 Sometimes, especially when we are young, we break the rules, or do stupid things. If you are caught the adult will try to think of the most unpleasant thing they can force you to do, so you will learn from your mistake and resolve to never do that again. When you remember this terrible event, in later years, you are supposed to be ashamed at your failings. You are not supposed to smile at the memory and share it with your friends decades later for a laugh – sometimes a punishment can back-fire.

When I was in my mid teens I was a member of a Sea Explorer unit. We would study and learn the skills required to operate a boat or ship and earn badges for our achievements. Twice a year we would have a weekend sponsored by the United States Coast Guard. On Friday night we would pitch our tents at the air station in down town St. Petersburg. We ate in the mess hall and were given a tour of the hangers and other buildings. After Saturday's lunch we were loaded onto a cutter (usually the 83-foot Point Swift) and taken to the island of Egmont Key. At the time the island had an active light-house station, a base for the Tampa Bay Pilots (who guide the ships into and out of the bay) and dozens of abandoned forts where we camped. Many of the forts had been built in 1898 as harbour defences during the Spanish-American War.

Most of the forts had only three sides with 25 foot high walls. They were covered on the water side with sand and grass mounds to both conceal and protect the walls. They were mostly armed with cannons on a hydraulic lift that would raise them above the wall for firing, there were also some very large mortars that could fire their shells in a high arc over the wall.
In later years an army town developed behind the forts with many buildings, including homes, a fire station, stores and even a bowling alley. The buildings were all gone by the time I was there, but the red brick streets remained.

Now we will come to Sunday morning. For breakfast we were issued bread, bacon and raw eggs to cook for ourselves. We had about a dozen members in our unit, but when it came time to cook breakfast there were only three of us left at our camp site in the fort. The others had probably either gone to eat with other groups, or were not hungry enough to chance having to help prepare the meal. We cooked just enough for ourselves, leaving a full dozen eggs in the carton.

The leftover bacon and bread brought no inspiration – but those eggs.... It was only logical to carry the eggs to the top of the wall and see how many we could fling far enough to land on the brick road. There were only a few eggs left in the carton when one of our adult leaders climbed up the steps to find us.

'What in the world are you boys doing?', he shouted, 'You are wasting food!' He then explained that the Point Swift had been called away for a search and rescue mission, and no one knew how long we might be stranded on the island, maybe for days. 'We might all starve because you wasted this food, you must be punished – Severely!'

We were given a few minutes to pack our gear into our sea-bags and marched to the Coast Guard light keeper's cottage. As we stood there while our leader explained that we were miscreants, and that after washing all their breakfast dishes we were to perform any menial task they wished to give us.

Breakfast dishes for three men consists of a couple skillets, a few plates, coffee cups and some silverware. With one washing, one rinsing, one drying and all of us putting things into the cupboard it did not take more than 15 minutes.

After we had completed our first assignment, the light keepers asked us to sit down with them in living room and explain our crime so they could give us the next appropriate task. I don't think that any one of them were over the age of thirty. We told them about the wall, the red brick road and the eggs. To be fair, they tried very hard not to giggle while we were talking. As they conferred in the kitchen I am sure I heard a 'what a great idea' and 'let's try that tomorrow'. They came back with grave expressions on their faces.

'We have chosen your next punishment, and it will fit your crime.' They pointed at a large stack of magazines between two of the chairs. 'We need you to sort all of these by publisher and date of issue. Some of them may have been damaged over the years, so you need to inspect each page as you review them'.

The magazines in the stack were published by Playboy, Penthouse and Hustler (if any one is not familiar with these, they all feature photographs of naked young women).

As we toiled at our labour in the air-conditioned house, we occasionally looked out at all the other 'well behaved' boys sitting on the hot pier, in the sun (it was about 95 degrees F),with their bags beside them. When the Buoy Tender Cosmos arrived to take us back to the main-land – we were the last to leave the cool house and board her.