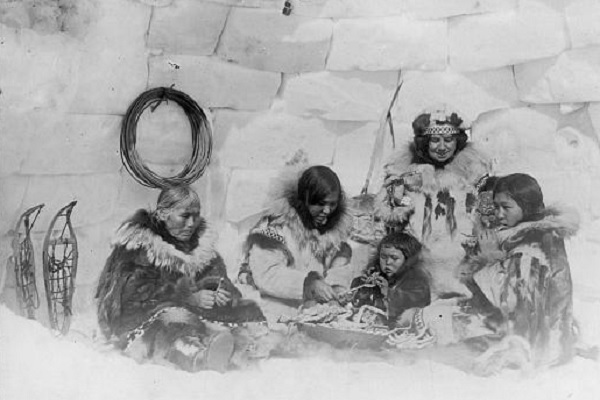 This igloo was 'home, sweet home' to an Inuit family in 1924. They welcomed the photographer, Frank Kleinschmidt, and Mrs Kleinschmidt (that's her in the photo) for a dinner that featured frozen crabs. No, you don't heat them up. That's Arctic Circle sushi, we suppose.

Mr Kleinschmidt was born in Germany in 1871, and died in Los Angeles in 1949. In between, he spent quite a lot of time up North, as, apparently, did his wife Essie. Kleinschmidt was a cinematographer, and produced the 1927 silent classic Primitive Love about romance, walruses, and snow. (Read that contemporary review. I dare you to do it without laughing out loud.)

No wonder the Inuit get annoyed. In revenge, they've made their own documentary film called Qallunaat: Why White People Are Funny. It's from 2006, and made by Inuit writer Zebedee Nungak with the help of his native informant and collaborator, Mark Sandiford, and some other native Qallunaat social scientists who were hanging around. Enjoy Mr Nungak's insights. (And can we get him to join h2g2?)

What are you going to tell us about for Create's January theme?