Architectural perfection is in the eye of the beholder.

The House by the Cotton Field 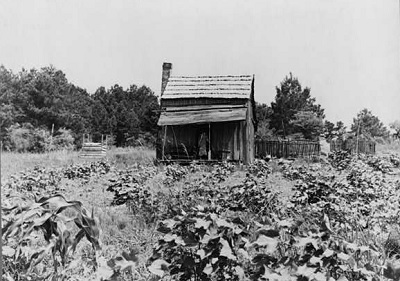 The dry comment by my diminutive grandmother was in response to our excitement over seeing a sign for the town of Malvina, Mississippi, as we raced down the straight, flat ribbon of two-lane, headed due south through the Mississippi Delta. The Delta, in case you don't know, is 7000 square miles of alluvial floodplain in the north of the state of Mississippi between the Mississippi and Yazoo rivers. It's distinctive (read 'weird'), and often called 'the most Southern place on Earth', and where my mother's 'people' come from.

It's also flat as a pancake and sparsely populated, especially back in the 1960s, when this tale takes place.

My grandmother Babe was a superb driver – she seems to have mastered the automobile shortly after its arrival on the scene, having ridden a horse to school as a child, but being photographed with flivver as a young woman – but in her advanced age, all that riding took its toll on old bones, so it was better for long trips that we ensconce her comfortably in the back of the '57 Chevy with us kids, while my Tennessee mountain-raised Dad navigated us down from Memphis at alternately breakneck speeds (the speedometer read a heady 90 mph, making a wind tunnel of the un-airconditioned car) and sweltering snail's-pace inching along (behind agricultural vehicles). As we went along, Babe pointed out features of interest, such as they were – like the thriving Delta metropolises consisting mostly of two houses on either side of the road, one complete with store and single antique gas [petrol] pump in front, interspersed at long intervals between endless fields of corn and cotton. In my head, that familiar song played, the one about the old cotton fields back home.

Somewhere along the line, we stopped at one of the 'gas stations' for lunch. While Dad talked to the man who pumped the gas, the rest of us entered the dark and marginally cooler interior of the store, where my Mom and Babe bought: a loaf of Wonder Bread, a jar of may'naise (local pronunciation), some freshly-sliced baloney and American cheese, which is at least notionally a diary product, and a large bag of Lay's Potato Chips (which are crisps, and stand up well to intense humidity, a good thing in Mississippi). For drinks, we got off-brand soft drinks, Nehi or Royal Crown from a cooler, and for dessert, Moon Pies, that exotic confection of the South. Thus provisioned, we sat ourselves around the picnic table beneath the only tree to be seen for five miles, and my Mom produced a table knife from her handbag. The Blessing was said, sandwiches were made, and we enjoyed our repast while we fended off wasps. The occasional light breeze made all-too-brief inroads into the rivers of sweat dripping down our bodies even now, in late Spring – at least, some of us sweated. According to Southern folklore, men sweated, girls like my two sisters perspired, and ladies glowed. (I suspected Babe would snort at that bit of 'wisdom'. Babe was the original pragmatist.)

Back on the road again, such as it was, we kept our eyes peeled for our turn-off while hoping we wouldn't have to slow down for another tractor. Once, we looked around in confusion when a road sign solemnly announced a Hill. The road rose imperceptibly, then crept back down below sea level. My Dad, used to driving in the Great Smokies, chuckled. All was rushing, car-generated wind and radio-borne wailing by Faron Young, who continued to address the architectural features in his house in lachrymose terms, beginning with the walls. I hated this song, which struck me as particularly inane even at thirteen. I longed for distraction, which I soon got, but not the way I wanted…

'Roll up the windows, y'all! Now!,' shouted my mother imperiously. We hastened to do so, because we could see World War I approaching in the form of a low-flying biplane, and we had no gas masks on board. With the car sealed as tightly as possible, we drove into the purple cloud. It didn't smell healthy, but my parents assured us the whole process was harmless…beneficial, even. (It was outlawed in 1970, and I never said a word to anyone about it. No sense worrying over spilled DDT or misplaced faith in the miracles of modern progress.) Once we got through the sprayed area, the air got cleaner, if still hot and humid, and we rolled down the windows again. Faron Young had disappeared into the AM ether, to my relief, and – to my even greater relief – my Dad spotted the sign for Pace, and we turned right off the soi-disant highway and onto a ribbon of dirt road running with equal straightness in the direction of the Big Muddy. We weren't going that far, however, merely kicking up a cloud of dust as we drove the final two miles to my Aunt Ruth's.

And then the frogs

Finding the house where my Great-Aunt Ruth lived with my great-uncles was easy: for one thing, it was the only structure visible for miles. For another, it sat under a large tree at the side of the road. Okay, sat. Maybe 'leaned' would be more accurate. The house was exactly what the US Farm Security Administration called a 'shack', a semi-technical term meaning roughly, 'This is made of wood, has some sort of a roof, and there is not a lick of paint anywhere on it.' On three sides, the house was surrounded by cotton fields, a common practice in the Delta where the fertile soil was not to be wasted. On the front side was the dirt road, and on the other side of that dirt road was a flooded rice paddy.

Which was disgorging frogs. Thousands of them, all over Ruth's yard. Tiny, inch-long frogs, croaking much louder than you would have expected. One even jumped into the car. We bounded out, joyously. Oh, sure, all of you who are reading this are expecting expressions of disgust. Pronouncements of doom. References to biblical precedent, etc, etc. Are you kidding? This was the Mississippi Delta. It was spring flooding. And my five-year-old sister Tish was in paradise. She barely gave Ruth time to hug her properly before begging for a Mason jar. Which Ruth, laughing heartily, handed her out of the kitchen. We saw no more of Tish for the next few hours: the tiny heaven-sent frogs had all her attention. Laney, my other sister, was off to inspect her favourites, the chickens, leaving me to tag along after the grownups, greet my great-uncles, cheerful as always, and admire the family's latest technological acquisition.

Which turned out to be cold (but not hot) running water. In the aforementioned kitchen. In a sink of astounding antiquity. Lord knows where they found it. But they'd run water into the house, at least, into the kitchen. No more pumping. I nodded appreciation, remembering how only a few years earlier I'd made my great-uncles laugh by trying to pump water when I was too puny to operate the pump. Personally, I thought my solution – having my sister and myself jump on the pump handle and try to ride it down – had been ingenious. Okay, risible, but ingenious. But the 20th Century had finally arrived at the cotton field, and there was running water.

The wooden outhouse was still there, however. And it was probably still inhabited by spiders. You can't have everything.

While the girls continued to appreciate the livestock, we 'grownups' sat on the porch. There was lemonade. There were rockers for the older folk, and spit cans for those who chewed or dipped. There was good talk. I had ears, and didn't need hearing aids yet. I listened. Later, Ruth, my Mom, and Babe cooked something up in the kitchen at the back of the house. Later still, it got dark, and we went inside.

I was delighted with Ruth's doorknobs. No, not Waterford crystal. Old thread spools. Pieces of wood, like everything else in the house, plain, unadorned, practical. All shape and no bother. The inside of the house had two 'rooms', but little division between them. Beds were anywhere there was space, tidy, with inviting feather mattresses. We slept there, and we could see the moon outside, and hear the frogs croaking, and all was peace.

The next day, a reluctant farewell. Even more reluctantly, Tish released her captive frogs. They would not be going back to Memphis with us. We couldn't have said 'invasive species', but I think we cottoned on to the idea. We waved goodbye through the rising dust.

As we drove off, my Dad asked, 'Babe, how long do you think Ruth'n'them will keep living in that shack?'

'Till it falls down,' was my grandmother's calm and prescient reply. A decade later, we returned to find the house in utter collapse…and my relatives living happily in a caravan next to it. The caravan had no running water, but the pump still worked.

The US Farm Security Administration used to take pictures of houses like my relatives'. There was a certain amount of opprobrious anthropology involved. Yes, but that house was magic, I tell you. In it, three military veterans – my great-uncles and my great-aunt – lived in contented practicality and welcomed visitors. Getting to spend time there was a privilege, like a trip to an enchanted castle. I've been to actual castles, and I know what I'm talking about. Ludwig of Bavaria may have had a lot of imagination – but it took Disneyfied mythology and Wagnerian bombast to keep him entertained. That wooden house by the cotton field had more wonder about it than any exotic planet or fantasy realm. And it was worth the journey, even if you had to listen to Faron Young along the way.

PS for Blues Aficionados: My mother's folks were from Rosedale. Where Robert Johnson allegedly sold his soul to the Devil. Nobody in my mother's family ever listened to the Blues, and if the Devil had shown up with a guitar and an offer like that, Babe would have sent him off with a bug in his ear. My grandmother thought pianos were suspect, low-class honky-tonk instruments (until persuaded otherwise with a little Mozart). So don't ask me anything about Delta blues, 'cos I don't know anything about it. I'm just glad I don't have to listen to any more Faron Young.