Some of you may like Mel Brooks films. Normally, I don't. The expression 'run the joke into the ground' comes up when I speak of Mr Brooks' oeuvre. That and groaning about 'Springtime for Hitler'. But this is a Mel Brooks film I like – besides, it has Frank Langella in it, and he makes a joyful Ostap Bender. But first, let's get into the mood with a couple of short subjects.

Today's Short Subjects: We're going to be watching a film about Russia, so why not watch some Russian dancing men? There, you feel energised already, and ready to join a vodka troika.

The other thing you need to do is to think like a Communist. So let's listen to a folk song about Communists. Why not Janet Greene's deathless piece of snark, Comrade's Lament? I discovered this ditty the other day, and I'm enthusiastic.

Now on to the feature.

Today's Feature Film: At first, I thought we would be stuck with a Youtube version with a voiced-over Polish translation. Not an ideal solution. But last week, some kind soul uploaded Mel Brooks' 1970 classic, The Twelve Chairs in all its English glory. Hurrah. You can now enjoy Brooks' Russian accent, and the mellifluous tones of Frank Langella – the best speaker ever to come out of Bayonne, New Jersey – along with the comic whining of the ever-delightful Ron Moody, all without benefit of Polish commentary. Great.

The Twelve Chairs is only one of at least twenty versions of the 1928 satirical novel by Odessan writers Ilya Ilf and Evgeny Petrov. The story about a down-at-heels former aristocrat and his search for his lost riches, hidden in a dining room chair, is really a romp through the vagaries of early Soviet life. It's funny, but it's also a bit sad, and insightful in places.

Langella gets to play Ostap Bender, a fictional character beloved in Russia. So beloved, in fact, that they built him a statue in Kremenchuk, Ukraine. There's a statue to the Chairs in Odessa. So we get the idea that the Russians really like this story a lot.

I think you will, too. Oh, and it was filmed in Yugoslavia, and some of the extras didn't speak English, which adds to the fun.

There's a lot of slapstick in here – it's Mel Brooks, after all – so you'd better follow the advice of the opening song and 'hope for the best, expect the worst!' 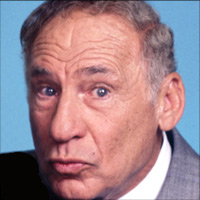