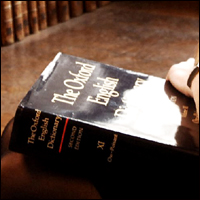 There's been an increasing trend in English usage to change the meaning of the word 'adequate'. Now, I'm not suggesting we should try to stop this – I don't believe in engineering the language – and in any case, I suspect it's probably too late now.

'Adequate' is a fine old word deriving from the Latin 'adaequatus', meaning 'made equal to'. Up until quite recently this was binary. If something met our needs, we described it as 'adequate'. We would even say 'perfectly adequate', although this is somewhat tautologous.

In its purest sense, it's a term used in logic. You can describe a concept as adequate if it fully and exactly represents its object. Definitions are adequate if they declare all the facts.

More commonly, it's used in a similar way to the word 'sufficient'. “The hospital had an adequate supply of snake venom antidote”, for example. If you'd been bitten by a cobra, then you'd surely be reassured by that statement.

However in its more modern sense, 'adequate' describes something which falls short. It implies something barely meets the requirement. It's probably even weaker than the word 'satisfactory' in this respect. You might even qualify it by saying 'adequate at best'.

Something which has accelerated the demise of the word is the satisfaction survey. These are popularly used by street canvassers as well as by online applications. If you need to rate something then you might be given options like 'excellent', 'very good', 'good', 'adequate' and 'poor'. Adequacy has shifted to the lower half of the scale.

So why has this happened? I'm a believer that language will always fulfil a need, so maybe we just needed a word that was somewhere on the lower half of the scale, and 'adequate' happened to suit. Yet I'm more inclined to think that it reflects not only our changing expectations, but also our inability to specify what is sufficient or satisfactory.

There's something ideal about sufficiency and satisfaction – they meet our needs, yet don't waste any effort or cost in overdelivery or overachievement. In industrial process terms, they're 'Lean'. Surely they are the levels we should strive to operate at.

Maybe one day we will value the sufficient and the satisfactory, but if there's one thing for sure, we will not for much longer be calling it 'adequate'. It's another casualty on the battlefield of lexical fashion.