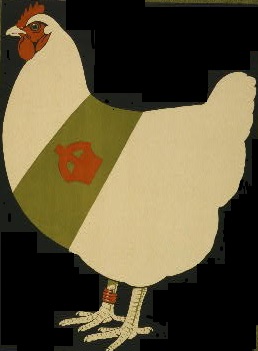 So, long overdue, I feel that I owe the community, if not the world, to write of the august events that took place on the 1st of August. Not for this writer the Suarez-biting of the football world cup but instead the hen-pecking of the 23rd Hen-Racing World Championships!

Bristling with excitement this writer, with family in tow, made our way to the great and famous venue of Bonsall (with a vast population of 3982). Having quenched our thirst with some of the 40 barrels of beer and cider, we had a look at the various sights to take in before the first heat.

First up was our (first) compère, suitably attired in black tie and waistcoat. A quick announcing of the vital rules: only hens may enter; the race was 15 metres long; first one across the line would win and advance to the next round and each race would be a maximum of three minutes – with a quick reminder that any fights would lead to disqualification, although he refused to clarify whether that was for the hens or competitors.

Secondly was the fine sight of one of the more interesting stag do events I have had the opportunity to see. Dressed as the only attending rooster of the day, with 'correct' plumage, we were informed by the, ahem, friends of Major Beech of the Royal Marines, that our brave defender would himself be racing two rented hens in the championships.

Our final sight before we moved to the event itself was the registration. In some events such might be a dry, dull process…but not here. With each trainer, ranging from 5 to 65, having to provide names and facts for each hen. Again, seemingly dry and dull. But let's have a look at some of the names being entered into the heats.

We had the famous: Roadrunner, the current champion, who held the world record of 3.4 seconds.

We had the rude: Mother Clucker, Crock Head, Cockin' and &$%" – the pronunciation of which was to remain a mystery to your writer.

And finally we had a less expected category – the world championships had become political! Save our NHS and Bring Back Fox Hunting (fully understandable for the competitor we felt) were prominent names with staunch histories behind them.

So after a top-up of the home-made scrumpy it was onto the heats!

I'd love to say that…but I'd be lying.

Instead it was far more entertaining – a battleground in who could prove that racing was not what evolution bred hens for. Numerous disqualifications for the rabble-rousing hens (including one particular competitor who had been disqualified for four consecutive years!) the roar of the fans would occasionally lead to a charge of the flightless brigade towards the finish line, or, occasionally, back towards the start line.

To say that we had not yet matched the Olympics might be an understatement, but where they have competiveness and skill we had entertainment and perhaps the most British event I have ever had the joy of attending. A crackling tension when a steward's inquiry was held about accusations of a winning chicken being entered twice. Controversy reigned over the possible doping implications of stoking one's hen with a sip of Guinness. Use of seed, wellington boots and umbrellas to summon hens to trainers at the end of the track was bitterly argued, as it has been for many years.

The bold run by the current champion, finishing in just six seconds (although still double her record). The final, led by the boldest five hens from a run of 12 heats and semi-finals, took off at a charge towards the finish line, alas despite fervent efforts this researcher, forced to depart before the trophy presentation, has been unable to determine the winning hen. For that, we shall have to return at the 2016 championships…a possible h2g2 meet perhaps?

I will finally note this is no small-town entertainment – with chickens attending from hundreds of miles away and the occasional international attendee the public is clearly riveted. The media is with us too – local and county was present of course, but so were two national newspapers, attention is being paid to this most exciting of sports, and avid fans see the day where Bonsall is but the centre of many events scattered across the globe. Below are a couple of links to the better videos, one of a single race at this year's championship and the other to the Daily Mail's article last year.