You don't need a barnyard. But beware: chickens are addictive.

Gateway Poultry and My Experience with It 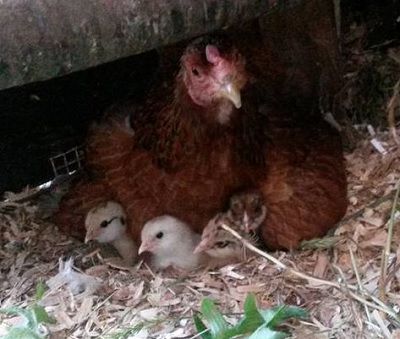 Chickens are known to be addicting. Not only are they addicting in and of themselves, but they serve as gateway livestock. I knew I could stop after just a few hens for eggs for my family, though. I wouldn't even need very many, since we don't really eat that may eggs, nor do we do a whole lot of baking. The legal limit of 11 birds1 was more than generous. Many urban and suburban areas that actually allow chickens only allow 4-6 hens on a lot the same size that our home sits on, so I really can't complain. And hey, the glorified shed that I converted to a coop is big enough to allow 10 hens 10 square feet each, which means that, with 10 hens, I can leave them locked in if need be2. Of course, 100 square feet is enough coop room for 25 chickens, as long as the birds have access to a run that will allow for 10 square feet each, or if one can let them range in the yard. This knowledge can be dangerous...

After a lot of research, I knew what breeds of chickens I wanted. I knew about quarantining new birds, and I decided that I didn't want to deal with brooding chicks or incubating eggs. If I ended up with a broody hen that would do all the work, then I'd get her some fertile eggs. Sure, my list of breeds shifted around some the more I learned, but I did know what breeds wouldn't necessarily fulfill my wants of a colorful flock and egg basket.

Then reality hit. Once the coop was finished enough for occupants, my husband found someone selling chickens locally, for fairly inexpensively. The thing was, none of the breeds she was selling were breeds I wanted. But we got three chickens anyway, and then I went back a couple weeks later and got two more. Our original three were older birds3 and the next two were younger. The next spring, I had my husband pick up two chickens while on a trip – one who gives me green eggs4 and the other has gone broody5 a few times.

The first time Frieda went broody, I got some eggs from a friend for free. Frieda hatched the eggs and was a great mom – too bad the chicks all turned out to be males, so I couldn't keep them. A couple months later, I got two more chickens. Neither was a variety or breed that had made my list, but at least I now had a white egg layer to contrast the light browns and the sole sage green egg. And the other chicken was colorful. 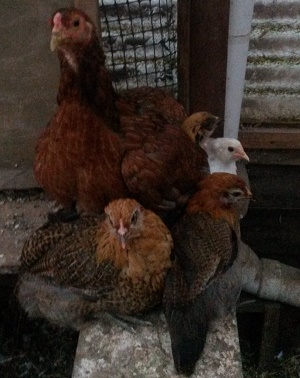 Frieda went broody again. I have a friend on BYC that has chickens that lay blue eggs, so he mailed me some. The postal service was not kind to the eggs. Once it was clear that nothing was going to hatch, I got some chicks at the feed store for the express purpose of just having fuzzy chicks that I would then sell. I had to brood them myself, because Frieda stopped being broody a week or so before I bought the chicks.

Frieda went broody again. I had eggs shipped again, this time paying for them. These eggs didn't hatch either. A large part of the problem is that shipping eggs is hard on them, and the eggs really shouldn't be shifted around the first few days of incubation. A broody turns them regularly. Since Frieda didn't give up on the eggs this time, I got her some chicks to raise, hoping she'd adopt them. She did, and has been raising them since July 11. I haven't decided yet how many I'm going to keep.

I'm actually going to have to cull some members of my flock. One hen has been laying internally, like the one I lost a few months ago. There's nothing that can be done, but she doesn't seem to be suffering as yet. Some of my older girls may not be laying any more, either, but I'll have to wait until after molting season is done to see who starts up again.

Now that I've had chickens awhile, I want other species. I want muscovies! They don't quack, and they eat flies and mosquitoes. I'd have to radically change my layout, though. I also have considered getting turkeys, and I want quail, too. I'd have to get an incubator to raise quail, though – unlike the other species I'm wanting, I can't use a chicken to hatch and raise them. One reason is just how small the eggs are, and the other is that chickens can be healthy carriers of diseases that kill quail...

Of course, if I get an incubator, I don't necessarily have to use it fot quail. I can incubate shipped chicken eggs whenever Frieda goes broody, now that I know that she'll accept them. That way, I can get the breeds I want that aren't available locally – which are most of tbe breeds I want, naturally...

1No roosters, "quacking ducks", nor anything else loud, like guineas.2For example, if we're going to be gone for a couple of days – feeders and waterers that hold a week's-worth of provender are also convenient in such cases...3And one has since been lost to internal laying4My others laid light brown5Hormonal change that makes a hen want to hatch eggs – attempt to hatch golf balls or her own feet – and raise chicks.