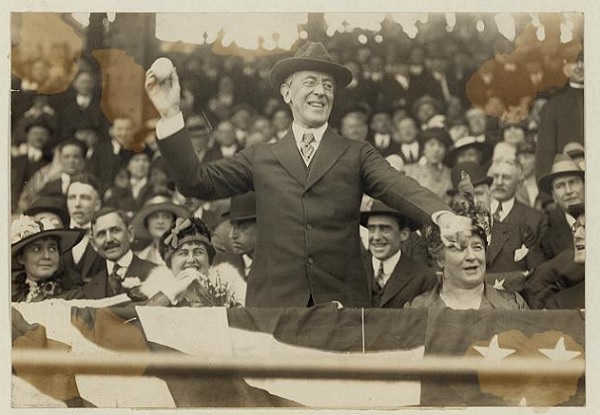 See this? It's a US president, Woodrow Wilson, in fact. Yes, he's throwing a baseball. That's a tradition now: the president throwing out the first baseball of the season. Back in 1916, it was a bit of a novelty.

What kind of name is 'Kennesaw Mountain', anyway? Well, it's the name of a place, and the Civil War battle in which Judge Landis' father was wounded. Seems like a strange thing to do to your kid, name him after the battle where you got wounded, but hey, they're odd in Ohio. Following that logic, Your Editor might have been named Hamm. Could have been worse – 'Battle of the Bulge Smith', anyone?

Anyhow, we suspect President Wilson enjoyed the game. If only all his tasks in office had been as pleasant. Soon, he'd have to face World War I – a sad undertaking for a pacifist. So relax, enjoy that smile, and…play ball!