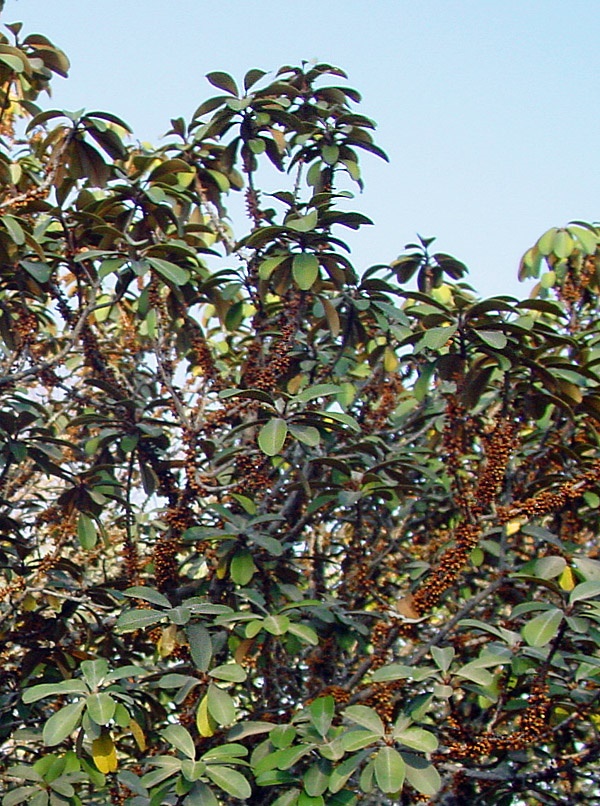 Here you have another iconic South African tree. The Transvaal Milkplum is also known as a Stamvrug or Stem-fruit, because of the way it bears its fruit directly on the older branches or even on the tree's main trunk. This mode of bearing fruit is actually not very unusual, at least not in the tropics. The Transvaal milkplum is a member of the Sapotaceae or milkwood family, which includes many species in Southern Africa, several growing into large, spectacular trees in moist forests. The trees of the milkwood family are characterized by their milky sap, which is not toxic like the milky sap many members of the spurge or Euphorbia family possess. Indeed, the milky sap of some of them are used for making chewing gum!


The stem-fruit itself is quite a modest plant, but easy to recognize. It usually grows in rocky locations, on hills or mountains. My first photo shows a typical specimen, growing on what appears to be bare rock, on some hills a distance outside of Polokwane. The trees are quite shrubby in appearance, with a dense, rounded crown of leaves. Mature leaves are a dark green with a greyish, waxy bloom. They are stiff and leathery in texture. Young leaves are covered with dense orange hairs, giving them a bright golden to reddish brown appearance. You can see this in my second photo, of a tree growing on a hill in the Polokwane Game Reserve. 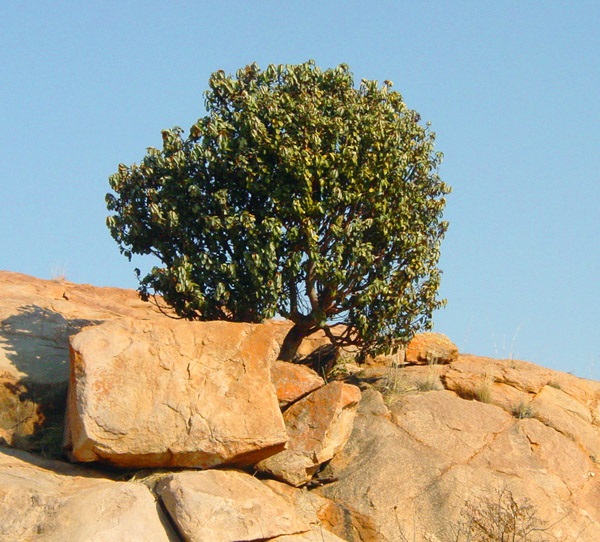 This tree sometimes grows in settings, such as forests or the banks of rivers, where it can grow large, up to 10m/33' in height. Most of the time it is only about a third of this size. Transvaal milkplums are found only in the far north of South Africa, in warm bushveld or savannah regions, or rocky outcrops in grassland. They are not rare, but usually grow individually or in small groups. 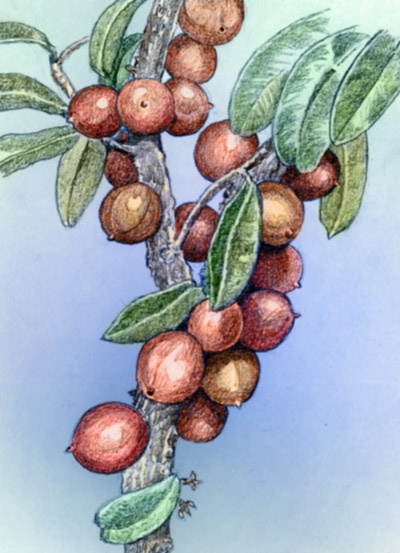 The main claim to fame of this tree is its fruit! They are quite large for wild fruits, reaching about an inch in diameter, and red when ripe. Before the fruits there are the flowers. These are borne in masses on very short stalks arranged along the length of twigs, branchlets and branches. The buds are densely covered in brownish hairs, as you can see in my third photo. The flowers are pinkish or whitish and strongly scented. Pollinated flowers grow into the fruits, clustered along the length of the branches.


These fruits are edible, quite tasty actually, and sought after. They are often sold by roadside vendors in rural areas. I would liken their taste to that of Litchis (for those who know them, here in South Africa they are much beloved) with just a hint of bitterness. The fruit itself also has the typical milky sap of the family in the skin and pulp. Each fruit also has a very big seed inside. They are adapted to be eaten by monkeys, baboons and many other fruit-eating mammals and birds. The seed, having a very tough coat, survives being ingested. Indeed, after it has passed through an animal's digestive system, and is excreted, it is primed for germination! Frugivores (fruit-eating critters) therefore help to propagate these trees in nature. 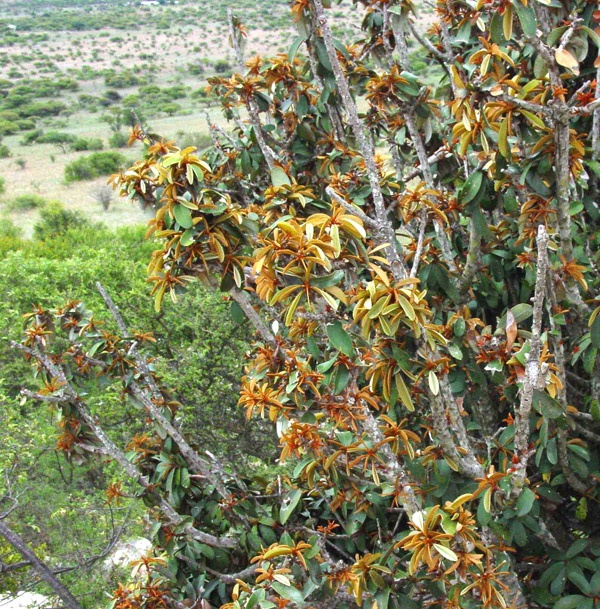 I don't have specimens of this species yet. They can apparently be grown from cuttings as well as from seeds. The large seeds should probably be scratched to weaken the seed coats, to mimic passage through an animal's digestive tract, to improve chances of germination. Beyond that, they're probably best planted in well-draining soil, with a bit of compost worked in, and kept moist but not wet. Germination should be best in a warm location.


But these are indeed excellent garden trees. They can handle light frost, and a moderate winter drought. Trees planted in large gardens or on farms will attract lots of birds and mammals. In a small garden, these trees will remain neat and compact, not needing much room. In regions that are too cold and/or wet, they can be kept indoors in large pots. They can even be made into bonsai specimens. They are easy to shape and naturally gnarly with stout trunks and branches. They grow well in full sun or in light shade. They are evergreen, the stiff, leathery leaves being long-lasting and shed only infrequently. The leaf colour change from young to mature can be spectacular, especially with all the different hues present on a single tree. They are fairly slow-growing and a specimen will take several years before it bears its first fruits.


These tasty fruits can be eaten raw, and are a good source of Vitamin C. They can also be cooked and made into preserves, jellies and syrup. They're even used for making wine and brandy! Fruit mashed together with the roots of the trees have been used as a traditional remedy against epilepsy. A rather radical treatment for headaches, is rubbing powdered roots of this tree into cuts made into the patient's forehead, and then making the patient breathe in smoke from the smouldering roots!