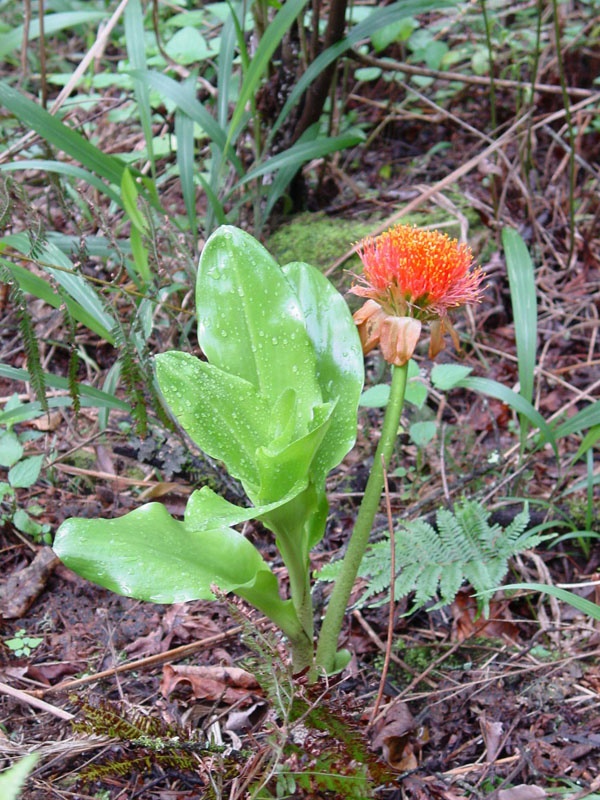 Here I have for you one of South Africa's most strikingly beautiful flowers: the Paintbrush Lily, Scadoxus puniceus. The scientific name means, roughly, 'crimson splendour'. The common name refers to the brush-like appearance of the flowers, though personally they look more like shaving brushes to me! It is also called a blood lily or a snake lily. This is yet another weird lily-like plant, of which South Africa has a ridiculous variety. The paintbrush lily is a member of the Amaryllis family, one that contains some of the largest and most spectacular flowers among the bulbous plants.


Yet another Compound Flower

Regular readers of this column will be aware that I've featured several 'flowers' that are actually not single flowers, but collections of smaller flowers. The paintbrush lily is another example. The brush at the tip of the flower stalk, achieving a width of 15 cm/6", is actually a collection of densely packed, narrow, individual flowers. These contain nectar, attracting birds like sunbirds. I've seen them perching on the 'brushes' or clinging to the stout flower stalks while probing the flowers. In the process, the yellow anthers – the male flower parts that protrude from the flowers – dust the birds' breasts and bellies with pollen, which they then carry to other flowers as they continue to feed, thus pollinating the flowers.


After pollination, the brush-like flowers wilt and fall off, but at the base of each flower the fruits form. They are round, bright red berries, these eventually forming a dense cluster at the tip of the remaining flower stalk. Each berry is about a centimetre/0.4" in diameter, and encloses a single seed. They attract birds and monkeys, which eat the fleshy fruit but excrete the seeds, which are then primed to germinate. So the animals help to distribute and propagate these plants.


Actually, paintbrush lily plants are beautiful even when not in flower. They have subterranean bulbs which reach about 10 cm/4" in diameter. Each spring, the flower stalk arises from the bulb, growing quite rapidly upwards. The flower stalk is quite stout and sometimes has purple speckles at the base. The leaves form below the flowers, but not quite at ground level. There is what looks like a stalk or stem from which the leaves arise. This is actually not a true stem, but a continuation of the leaf bases which clasp each other where they emerge from the bulb. These 'false stems' or pseudostems distinguish the paintbrush lilies from their relatives the blood lilies of the genus Haemanthus, where the leaves don't form stems.


The leaves of the paintbrush lily are quite large, broad and glossy. They reach 40 cm/16" in length and have wavy margins. They have a very lush, luxurious appearance. Paintbrush lilies typically grow in scrub or at the edges of forests. They usually grow where there is some shade, but not too much. I would say they prefer semi-open areas. I often see them where there are trees and shrubs around and above the plants, but the plants themselves are fairly exposed and easy to see from far away. Most of the plants I've seen grow in hilly or rocky regions, often in pockets of shallow but humus-rich soil. One of the largest populations I've seen occurs in the Makapans Cave region closed to the village of Mokopane. Finding these plants flowering in the wild is a glorious, magical experience!


Like many other bulbous plants, paintbrush lilies go dormant in winter. The flower stalk and the leaves die, dry out and fall off, but the bulb underground remains alive, having stored water and nutrients that see it through the cold, dry season. Come the new spring and the rain, new flowers and leaves emerge again!


There are two other species in the genus Scadoxus here in South Africa, and six more in the rest of Africa. The paintbrush lily is the most common and widespread species, occurring from the Eastern Cape Province northwards. It exploits the relatively mild and moist microclimate of bush clumps or thickets to help it survive in the otherwise dry savannah and grassland regions. Another spectacular relative, the Fireball or Catherine Wheel Lily, Scadoxus multiflorus, occurs only along the warm eastern coast of South Africa. 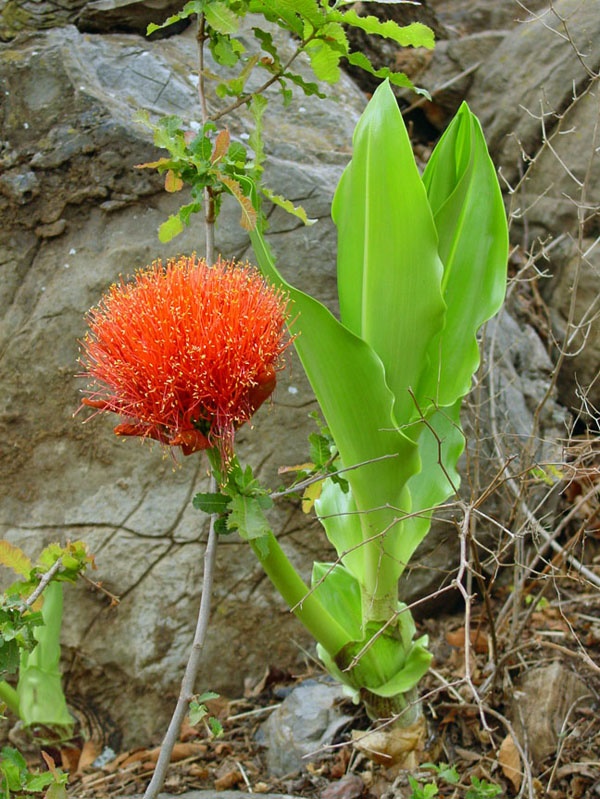 Like many other amaryllids, paintbrush lilies have poisonous bulbs. This is to protect them against digging herbivores like mole rats. But these poisonous substances, taken in low doses, can have healing properties. It has been used for treating coughs, upset stomachs, headaches, and to help with pregnancies, supposedly ensuring safe deliveries. 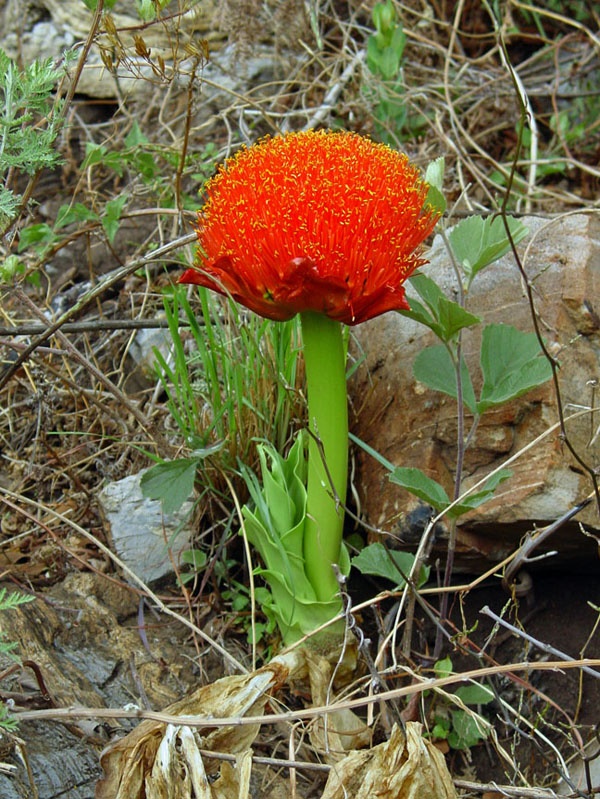 I must confess that I haven't yet grown this lovely species. It is a tad difficult to grow. It has to be grown from fresh seed, the seeds being soft and fleshy rather than hard, and quickly deteriorating and spoiling if not planted immediately. Seeds are also hard to come by. The seeds must be planted in rich and well-draining soil, and very shallow, perhaps even with the upper half exposed. Keep the medium moist. Be patient; it will take some time for the first leaves to emerge and the little plants will grow slowly. It may take four or five years for a plant grown from seed to flower.


Once you have your plant, it is not too fussy. The subterranean bulbs can survive mild frost. It helps to have a good covering of compost over the bulbs in winter, and to leave them dry until the next spring. They prefer warm summers that are not too wet. They perform at their best in a position where they get light shade. Inspect your plants regularly – watch out for damage, brown spots and dead patches on the leaves, especially at the base. This might be caused by Amaryllis borers, a kind of beetle grub that digs in and feeds on the bulbs. These grubs must be removed and destroyed or they might destroy your plants! But once they're removed, the plants will rapidly recover and flourish. Slugs and snails may also damage the shiny leaves, but they are not quite as lethal as the borers are. I prefer physically removing pest critters rather than using poisons since I want a garden with a healthy natural ecology that attracts birds, butterflies and other nice little things. In such a garden, there will be natural pest control such as thrushes and ibises that eat the slugs and snails. Blood lilies can be valuable components of such a natural ecological garden.


Unfortunately this plant's beauty is also its curse. Many plants are removed from nature and sold to gardeners, rather than growing them from seeds. This is seriously depleting the local populations, which is a shame and an outrage, since there are few things more impressive than coming across a big colony of these flowering in the wild. Therefore I urge anyone who wants one of these glorious lilies to make sure to get it from a reputable source. Personally I will wait until I can get actual seeds of them that I can grow myself, to be absolutely sure that I'm not getting plants taken from the wild.