Some localities have perdurance.

A journalist friend of mine made me laugh once when I gave her a ride home. 'Oh, you know that shortcut,' she remarked. I admitted that I did. 'I used to know it,' she said. 'I had it memorised. But then…' (Wait for it.) '…they changed the billboard.'

Some places become landmarks because they don't move. In other words, nobody's changed the billboards. Take Betsy Ross' house in Philadelphia. 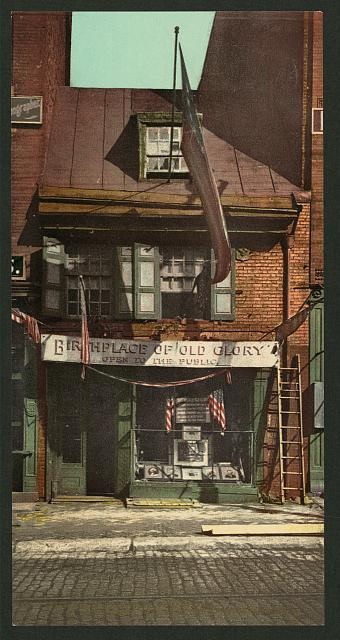 When this picture was taken in 1900, Betsy's house and shop had been standing there for over a hundred years already. Betsy was a cool lady. At 21, she caused a scandal in Quaker Philadelphia by eloping to New Jersey with an Anglican. That got her thrown out of Meeting. She and her husband shared a trade – upholstery making.

John Ross died during the Revolutionary War. One story has it that he was blown up in a gunpowder explosions, but we can't prove it. Betsy remarried. Her second husband was imprisoned by the British, while Betsy, working out of this shop on Arch Street, made and repaired uniforms for the Continental Army, packaged munitions in the cellar, and, some say, charmed and distracted the British officers. Alas, her second husband died a POW, and she remarried at the end of the war – another veteran of the conflict. Very patriotic woman, Betsy.

Betsy's famous in the US because she made the first US flag. She got the job because, well, George Washington was an infamous clothes horse. And Betsy was his friend and couturier.

The house, which is right downtown, has been a tourist attraction for ages. Here it is in a recent photo by Carol M Highsmith. 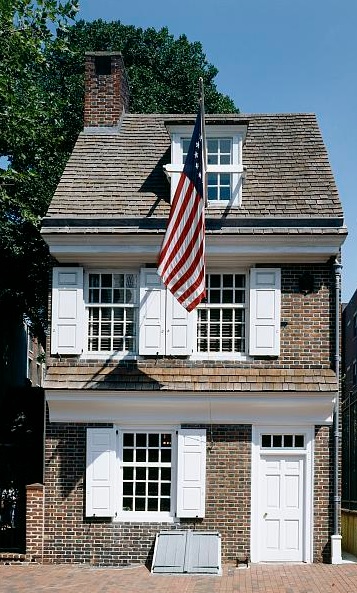 Notice what a difference a hundred years makes. New coat of paint. And it's been a museum since around 1898. You can read about it here.

Now, just think: 250 years from now, your house might become a mecca for history tourists. Just don't let them change the billboards.